In the first five years of Mark Stoops’ tenure, when he brought in a new recruiting class, you could expect about half of the 25 signees to sit on the sideline for a year.  A few JUCOs and four-stars would play right away, while the rest spent the year in the weight room and on scout team.

That’s all changing this year.

The new college football redshirt rule allows freshmen to play in up to four games without using a year of eligibility, completely changing the freshman dynamic.  Stoops is deciding on the fly exactly how they’ll use the rule to their advantage.

“Some freshmen will play and some will be on that cusp of ‘we’ll see.’  We’ll get them ready and if we have injuries and if we feel like they progress, they’ll play. We have that four games to work with. That’s the first time we’ve ever been through that.” Stoops added: “I definitely want to be careful. There will be some guys where they definitely gonna play. I’ll go through that Monday with the two-deep on guys we anticipate traveling and playing.”

“I think it’s a great rule.  It keeps guys locked in.  At this point you’re planning on playing them all.  You’re not necessarily searching training camp to see who (will redshirt or play); you’re preparing like you’re going to use everybody. I think that’s huge.”

There are a few players that will provide eye-opening moments in garbage time (I’m looking at you running backs), but the roster will not need them to play in more than four games right away.  The following freshmen are good enough and the Cats will probably need them for the entire 2018 season.

Kentucky has never been this deep across the board, except at the Will linebacker.  Jordan Jones has battled a multitude of injuries over the last 12 months, and behind him it’s only underclassmen.

Redshirt freshman Jamin Davis could be called upon to keep Square and Oats’ season of eligibility, but he primarily plays behind Kash Daniel at Mike.  Square is an explosive early enrollee who has picked up the defense quickly.  Oats is still developing, but he might be too talented to keep off the field.  How Stoops and House juggle this rule between these two players could be something we’re talking about three years from now as either a great success or a complete failure.

One of the four wide receivers was going to emerge from camp as a contender.  Hayes was the one who rose to the occasion.  The small, shifty wide receiver from Hollywood, Florida is one of Kentucky’s three primary slot receivers this fall, joining David Bouvier and Clevan Thomas.

Only two UK offensive linemen have played as true freshman at Kentucky and this year they’re your starting tackles, Landon Young and “Big” George Asafo-Adjei.  Army All-American Darian Kinnard will be the third.

“Kinnard, we’ve been very pleased with,” Stoops said yesterday. “Much like Naasir Watkins a year ago, we were on the cusp all year of playing him or not. With this new rule it’s really helpful because we could progress him as if he’s going to play every game and maybe if we don’t need him you can keep it. It’s yet to be seen. We feel like he’s in a position where he could play. We’re trusting him. He’s doing a very good job. He’s in the top eight, nine right now. We’ll just kind of see where that goes.” 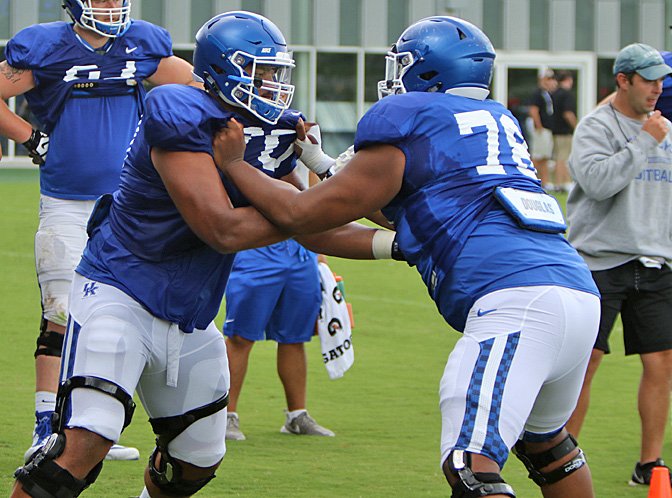 The Aussie punter has quite the boomstick.  He’ll play as long as he’s in a Kentucky uniform.

Josh Paschal’s unfortunate absence moved Hawkins closer to the action.  Normally defensive linemen need a redshirt year to develop, but in each open practice he’s been one of the most impressive athletes on the line of scrimmage.  If he can stand up Bunchy Stallings, he can hang with the best in the SEC.  Hawkins is good enough to play.  We’ll see if the Cats need him for more than four games.

One of the two must play.  C.J. Conrad and Justin Rigg will get a lot of playing time, but they’ll need a fair share of breaks.  The Cats could also use a third tight end for goal line situations.  Ideally, they’ll keep a redshirt on one.  If I had to pick today who would play, I’d roll with Upshaw, who’s physically the most game-ready.  We’ll find out from Stoops on Monday if I am correct.

This is one of those awkward moments where two hours after the post was published I realized I made an idiotic omission. Marquan McCall, the nose guard who was the highest-ranked player in the 2018 recruiting class, is definitely playing significant snaps this fall. I’ll blame my mistake on the fact that he’s so good he doesn’t look like a freshman. Keep an eye on #50.