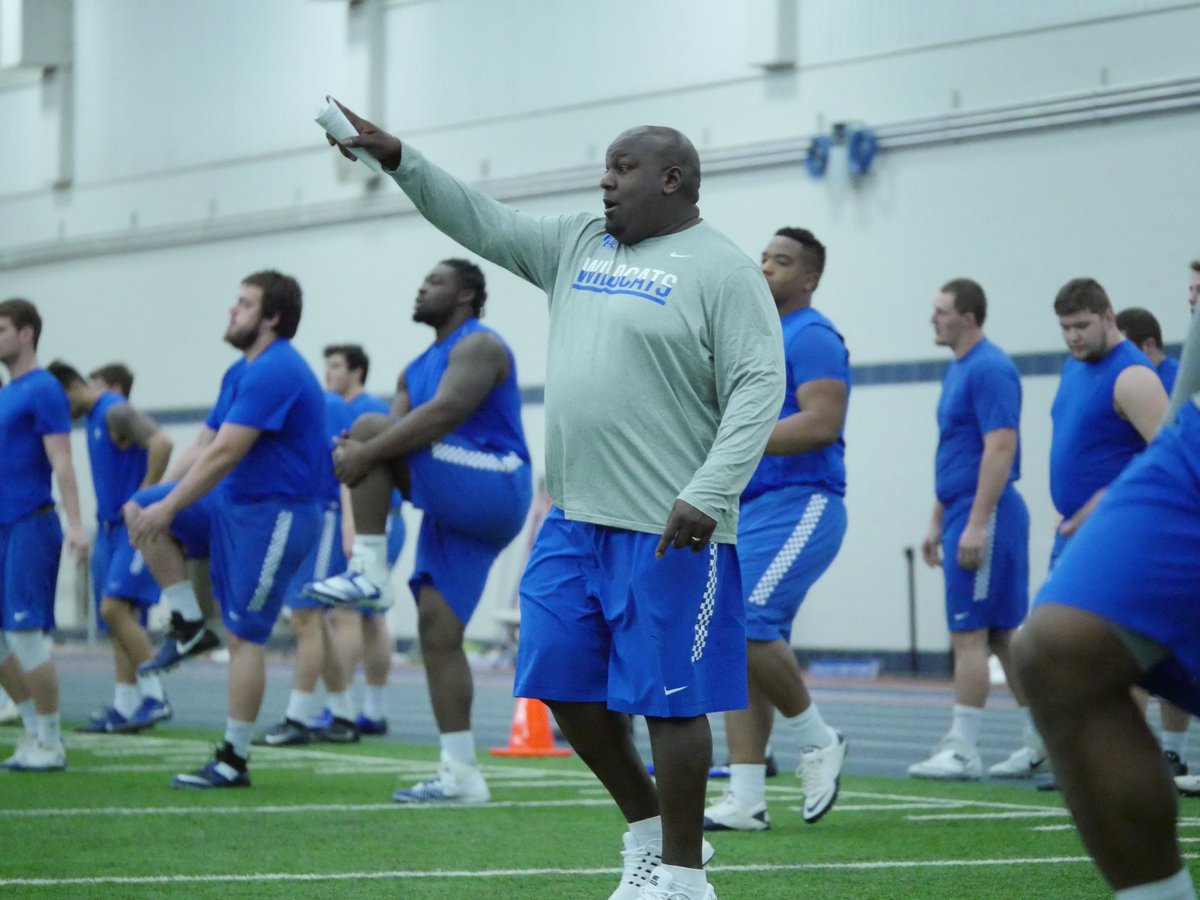 Derrick LeBlanc is  young, energetic coach that is obviously excited to be at Kentucky and in the Southeastern Conference. LeBlanc singled out junior DT Adrian Middleton who is now listed at 275 pounds (was 300 during the 2016 season). Middleton is apparently working hard to develop, which excites his new coach. I’m guessing here, but I’d say by mentioning Middleton, LeBlanc is rewarding hard work and sending a message to other defensive linemen to step it up to Middleton’s effort-level.

LeBlanc mentioned the words “aggressive” and “technique” on several occasions. Known as a teacher and coming from the Pete Jenkins lineage, Stoops’ new DL coach will emphasize player development with intent to turn up the Wildcat front seven’s intensity level and production. The Cats totaled just 21 QB sacks in 2016; DL accounted for 7. That number must increase. Communication also seemed important as he discussed talking with recently signed and current players on a regular basis.

The timing of this hire spoke volumes. The fact that LeBlanc was hired nearly immediately after mandated time allotment tells me that Mark Stoops had his new hire in mind prior to Jimmy Brumbaugh’s departure. Having a replacement list per position coach is common with college head coaches. Overall, I echoed media consensus and was impressed with Derrick LeBlanc’s opening media session in Lexington.

Dean Hood was emotional. In fact he cried early in the press conference when discussing Joey Kraemer, a former EKU player that was tragically killed in an automobile accident prior to the UK game. Hood spoke about how Mark Stoops and UK handled that situation with respect. Hood is excited to be back “home” in Kentucky. While actually from northeast Ohio, his wife is from Madison County, KY and he spent many years at EKU.

Dean Hood brings a wealth of knowledge and experience to the Wildcat coaching staff. While primarily an OLB coach and Special Teams Coordinator, Hood provides Mark Stoops with a sounding board from the head coaching perspective. I have zero doubt that Josh Allen and Denzel Ware will continue to develop as both are mentioned in the Top 10 of their respective positions.

Hood is a homerun hire. His sideline experience as a head coach and defensive coordinator, credibillity, and proven teaching experience will pay immediate dividends that will be obvious towards the end of spring practice. He also stressed aggressiveness and technique. With both Hood and LeBlanc vocalizing aggressiveness and technique, I’d say those two aspects will be stressed in spring practice.