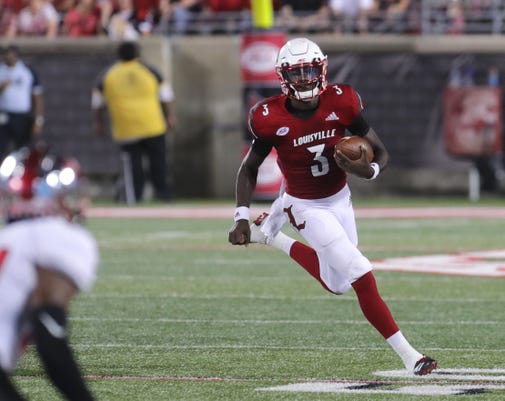 He leads Louisville in rushing

Yes, you read that right. A quarterback leads Louisville in rushing. Not a running back. Cunningham will be a running threat and will need to be contained. He has recorded 441 yards in 9 games, averaging 45.3 yards per game.

He was not the starter at the start of the season

Jawon “Puma” Pass was named the starter at the beginning of the season. That didn’t last long. Louisville made the change four games into the season. Cunningham got his first career start against Virginia on September 22nd.  He went 6-of-9 for 35 yards. Lousiville lost 27-3.

However, Louisville has played both quarterbacks all season.

I fully expect to see two QBs from Louisville on Saturday, but it appears that Malik Cunningham could be getting the start. https://t.co/QoXFSPCtYF

He had an offer from Kentucky

He is the highest graded Louisville QB

Louisville has played three quarterbacks this seasons. One is no longer on the team. According to Pro Football Focus, Cunningham has been the most proficient.

Jordan Travis (no longer on the team):

He doesn’t know how to slide

Malik Cunningham on why he doesn’t slide, “Saturday it went through my head how to slide, I was about to slide, but I didn’t know how to do it so I just fell.” pic.twitter.com/FIXcOXjrJ0

How many times will Josh Allen get to the QB against Louisville? pic.twitter.com/9RwzLyIsIz