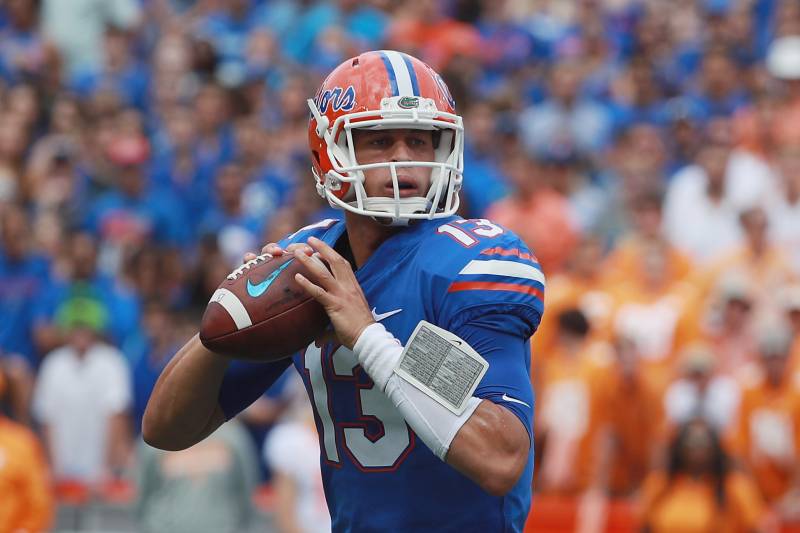 He was named the starting quarterback in August

“The whole body of work from spring on,” McElwain said in August. “He deserves it. He’s done a really good job. Not to say the other guys didn’t.”

Against Michigan, Franks finished 5-of-9 for 75 yards and was pulled after his third quarter fumble and replaced by Zaire. Franks looked completely different against Tennessee, finishing 8-of-28 for 212 yards and two touchdowns.

He was given a trophy by his American History professor

On the Monday following the Hail Mary game-winning touchdown pass again Tennessee, Franks walked into his American History class and his professor gave him a trophy. The professor normally awards the trophy to students who ask really good questions.

“He just gave me the trophy out of nowhere to start the class and told me good throw,” Franks said. “That’s kind of how class started.”

I think it’s safe to say that pass is A LOT better than a good question about American History.

And in case you live under a rock, here is the video:

His brother plays tight end at University of Central Florida

Feleipe’s older brother, Jordan Franks, is a senior tight end at UCF. As a junior, Jordan played in 11 games, catching 11 passes for 143 yards and not touchdowns. Jordan did not start out his college career as a tight end, but as a linebacker. During his sophomore season, Jordan went from linebacker to defensive back to wide receiver and then as a junior he switched to tight end. That sounds confusing and like a lot of work.

He played kicker and punter in high school

Not only did Franks have the responsibility of throwing the ball in high school, he had the responsibility of kicking and punting the ball. Normally schools would not want to risk their quarterback getting hurt, but I guess they didn’t care. As a senior, Franks hit his longest field goal of 47 yards and his longest punt was 68 yards. He acted as kicker and punter during his junior and sophomore seasons as well.

Franks clearly does not care that Florida Gator fans are made fun of for wearing jorts because he appears to like them. Thanks for proving our point that “Gators Wear Jean Shorts.”

Happy thanksgiving to all ðŸ¦ƒ