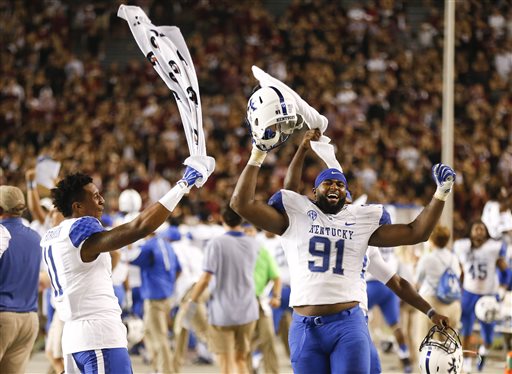 Congratulations to UK senior defensive lineman Farrington Huguenin, who accepted an invitation to play in the 5th annual NFL Players Association Collegiate Bowl on January 23, 2016 at the StubHub Center on the campus of California State University Dominguez Hills.

In his senior season, Huguenin had 52 tackles, four tackles for a loss and 1.5 sacks. He started all 12 games, breaking up two passes and tallying three QB hurries. Over his career at Kentucky, Huguenin had 95 tackles, five of which were for a loss, two fumble recoveries, two blocked kicks, and seven total quarterback hurries, three of which came from as a freshman in 2012.

The NFL Players Association Collegiate Bowl will be televised nationally on ESPN2 on January 23rd at 6 p.m. ET.

4 Comments for Farrington Huguenin invited to the NFLPA Bowl