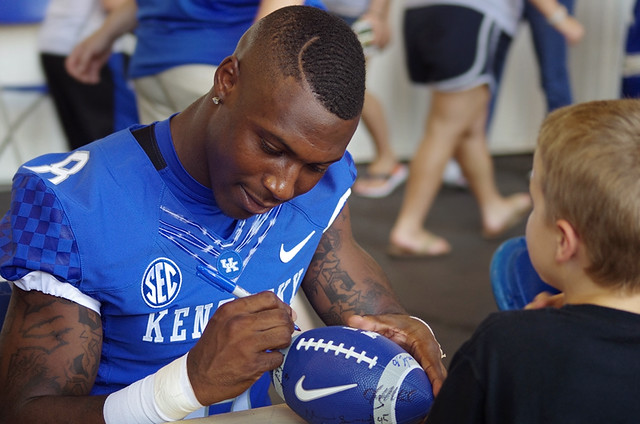 Fan Day, Media Day, and Picture Day are all mandatory camp events. One stinks, one is conspired, the other is awesome. I’ll break down each as they come around. Leading off is Fan Day, which is the awesome one.

As a player, Fan Day is overwhelming but wonderful. For rookies, it’s their first experience around a BBN assembly. It can be intimidating, demanding, but most of all motivating. Signing hundreds of autographs is a rite of passage of arrival. For veterans, it’s a chance to catch up with old friends they’ve met at prior Cat Walks or other fan gatherings.

However, there are some kindergarten rules that players and fans must adhere. There’s nothing more disappointing than for a parent to tolerate the heat and stand in long lines only to be received like an annoyance.

–Take the head things off! I’m not sure what the proper term is today; beats, ear phones, ear buds, whatever. Name is irrelevant to my point. Acknowledge fans. They, we, buy the tickets that pays for scholarships.

-Don’t be shooting the bull with your boys while signing autographs. See above. Casual, brief conversations are necessary.

–No cursing! Nothing screams of an undisciplined team more than a starting tackle dropping the F bomb in front of a four year old. Locker room and practice field language is one thing. But not in front of the kids. Little ears will be listening. Little eyes will be watching.

–Don’t complain about Fan Day in front of fans. Truth is, for players, Fan Day is normally at the end of a couple tough practices. Deal with it. A few years back, UK nearly had to pay fans to attend one of these things.

–Cherish the moment. This doesn’t so much address player behavior. There comes a time when nobody will care. That time usually follows Senior Day. Have fun. Accept and respect the BBN’s dedication.

-Be cognizant of Compliance rules. They will be watching!

-Don’t bring 249 items to be signed. Lines are long. Be courteous to fellow fans. Especially do this if you see me and mine behind you in line.

-Don’t ask players what they thought of the Wisconsin game. That nightmare was universally loathed.

Players only experience Fan Day 4-5 times in their career. For fans, the day is a family outing that costs money and requires a time commitment. Good time should be had by both players and fans. See y’all there.

*Please note, I’ve had nothing but positive Fan Day experiences over the past three years.