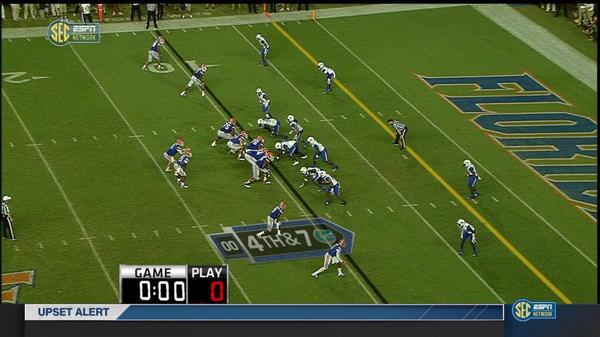 You know it. I know it. The people of the great Big Blue Nation all know it. Kentucky ended the streak last season when they upset the Gators on their home field. The playclock struck zero and Florida would have faced 4th and 12 in Overtime. Ashley Lowery might have had better coverage on the Robinson fade route. But, as you know, that just isn’t the way that things played out. The Gators scored after the missed call and went on to win in triple overtime. In order to get your blood boiling and relive that fateful play ESPN has sat down with several of the players involved to relive those fateful moments and what might’ve been. First up, the quaffed one, Patrick Towles:

Kentucky quarterback Patrick Towles (from the sideline): “Obviously, I was not extremely excited about it. Jeff threw a really good ball and the receiver made a really good play. We had other chances in overtime to win the game, so we can’t put the blame on anybody else but ourselves.”

From where you were, did you think Jeff got the snap off in time? “I didn’t think he did, but it doesn’t matter what I think. It matters what the refs think. They’re the experts, and they thought he did. I’m sure there were more calls that we got that were questionable in that game. It’s just the nature of football. It definitely didn’t end the way we wanted.”

ESPN spoke with Coach Stoops, AJ Stamps, and a couple Florida guys as well so the whole article is worth a click. [ESPN: Oral history: Florida-Kentucky 2014 — Jeff Driskel’s overtime touchdown] While we didn’t when the game the controversial result is sure to be bulletin board material for the game. And at the very least we will always  have these quality images from last year’s near upset:

Can’t wait to see some more of this tomorrow #BBNpic.twitter.com/V46oX1twsF