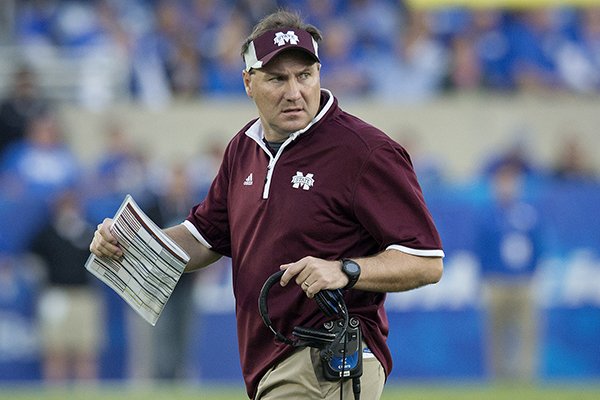 The show was pretty boring — although it really had my attention when Mullen described his blackened catfish over sausage jambalaya and maque choux — and it didn’t really hit a lot of newsy talking points, like I had hoped. But Mullen did give a brief breakdown of what he sees in the Kentucky football team, which his Bulldogs will face under the CWS lights tomorrow night.

They’ve got an explosive running back. They’ve got their second quarterback in, but he’s actually a little bit more mobile, which helps their run game even more. So they run the ball. They run the ball very, very efficiently. Got a good offensive line in the run game and that really helps them with the play-action pass.

Defensively, they’ve got a big front — they’ve got a nose tackle that’s like 390 pounds. They’re big and physical up front. They’ve got a lot of length at the corners, so even though you get one-on-one shots on the outside, it’s tough to throw deep on guys that are 6-foot-3 out there. Both corners are — I think one’s 6-2, one’s 6-3, so they’ve got some real size outside on the perimeter.

Hey Dan, Elam lost a lot of weight this offseason. Maybe pay closer attention to your next opponent.