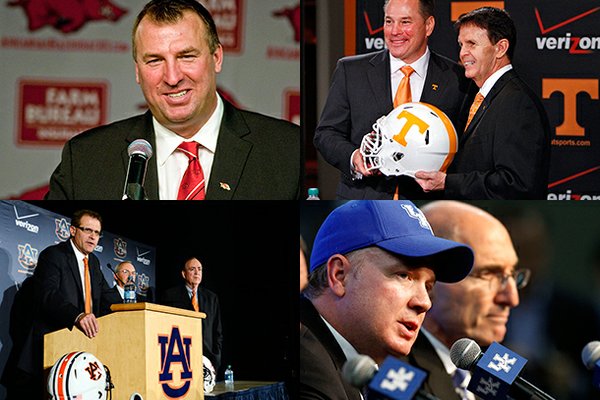 You know how I know Kentucky’s turning some heads in the SEC? Kevin Scarbinsky, the college football columnist for AL.com (the main news source in Alabama), wrote an article today in which he argues Mark Stoops is emerging as star of the 2013 class of SEC coaching hires that also included Auburn’s Gus Malzahn, Tennessee’s Butch Jones, and Arkansas’ Bret Bielema. Old Kentucky football fan says: Think about it. Malzahn, Jones, and Bielema are all struggling this season, while Stoops has slowly, quietly put together a program that’s actually looking up instead of down. Take it away, Scarbinsky:

Meanwhile, Stoops – the football coach at the basketball school – is the only member of the SEC coaching class of 2013 trending in the right direction. Kentucky just beat Missouri to improve to 3-1 overall and 2-1 in the SEC and snap an 18-game losing streak against ranked teams.

If the Wildcats beat Eastern Kentucky this weekend, they’ll have a better record than Auburn when those teams meet on that Thursday night TV special Oct. 15. Who could’ve seen that coming? Bill Curry leaving Tuscaloosa for Lexington was easier to imagine.

As Scarbinsky says to close his column, when all four coaches were hired, most thought Stoops would be the first one to fail. Right now, he’s the only one getting it done.