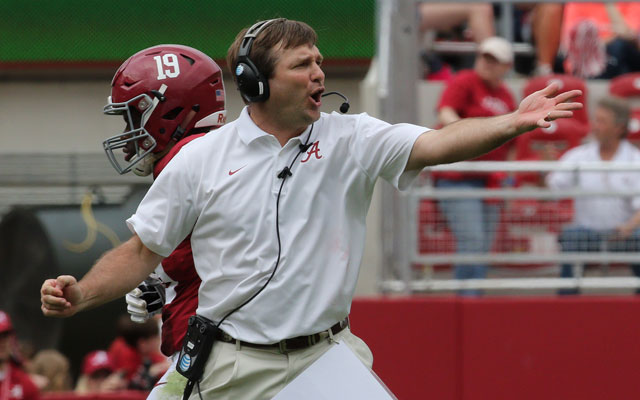 Kirby Smart learned a lot during his Alabama tenure with Nick Saban.  His robotic bottom-line approach is evident, but he forgot the importance of the placekicker.

Now you remember the kid with glasses that took down Kentucky on the road with a game-winning field goal as time expired.  That kick ensured bowl eligibility for Georgia in Smart’s first year as the head coach of his alma mater.

The redshirt freshman was an All-SEC Freshman and an SEC Special Teams Player of the Week as a walk-on.  Despite his success, he will remain a walk-on.

Even though six scholarships have opened up following early declarations for the NFL Draft, Smart simply can’t waste a valuable scholarship on a kicker.  I mean, all Blankenship did was lead the team in points scored.  No big deal.

Fed up with Smart’s crafty BS, Blankenship’s parents took the case to the public.  In this lengthy e-mail to Dawg Nation, the Atlanta Journal-Constitution’s UGA website, Smart is put on blast.

You can read the letter in its entirety here, but due to length I’ll simply provide a few excerpts.

In two months, Coach Smart went from “We have a damn good field goal kicker over there” to “I’m not sure if we trust Rodrigo to be the player we want in that position.” That was the excuse/rationale/explanation he employed in our meeting on Jan. 2 after delivering a well-planned and well-conceived litany of deficiencies regarding our son’s practice, injury and emotional “issues.” This would be AFTER he trusted our son enough to kick field goals and extra points for the last 10 games of the season…

…Somebody’s going to get the scholarships left behind by Wilson, Briscoe, Choates, McGee, McGraw, McKenzie (they weren’t simply vacated into thin air, were they?), and it is very distressing to us that our son, who has ALREADY made fairly significant, valid and measurable contributions to this program commands a lower priority than those who have yet to provide a single play or single point for that same program. Isn’t Rodrigo a somewhat viable candidate for future contributions? Has he not established a somewhat impressive track record on which to base future projections?

That means the newbies will be cashing those weekly $200 maintenance checks (not to mention the free housing, tuition, books, etc.) while our son uses his debit card for weekend meals and incidentals; back home in Marietta there’s a dad who has to keep his son’s checking account balance on the plus side…

Complaining parents are a coach’s worse nightmare.  Instead of having a thorn in his side, Smart’s decision to be the anti-Richt has turned into a PR nightmare.

Instead, Blankenship’s family will continue to carry a financial burden for the foreseeable future.  Unfortunately, this letter probably only made things worse.  If Smart changes course, it will set dangerous precedent.  A guy who watched kickers consistently blow it for Bama finally found a good one at Georgia, and it only took one season to get the kicker on his bad side.

Instead of being a decent human being, Saban’s robotic offspring is the biggest jerk in college football.

14 Comments for College Football’s Jerk of the Day: Kirby Smart