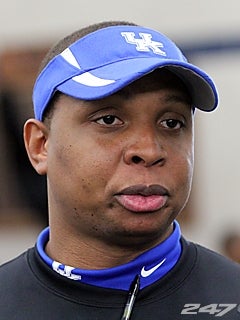 When Chad Scott was brought back to coach at Kentucky, he was originally planned to be the wide receivers coach.  Now, after two seasons coaching running backs, he’ll get his opportunity.

“I was actually looking forward to coaching the wide receivers then, but it just happened where things didn’t work out initially and I ended up coaching running backs.

Scott will have every receiver that caught a pass last season back in his arsenal.  The WR group, led by Dorian Baker and Garrett Johnson, look to improve on a somewhat disappointing 2015 performance.  Head coach Mark Stoops realizes that there needs to be improvements at the position, and he thinks Scott is up for the new challenge.

“They played some good football, but too inconsistent for us. That group needs to continue to improve to be difference makers. … Even though we made some really spectacular plays at times, I just think the overall consistency of that group needs to improve.”

“Chad is a very good football coach,” Stoops said on Monday. “He already had a lot to do with the X’s and O’s part of wide receiver and having input with the guys and working with them.”

During the offseason, Scott plans to visit other schools and pick the minds of some of the best WR coaches in the country.  He already has a head start, as he’s been learning from newly hired QB coach Darin Hinshaw this past week.  Hinshaw was previously a receivers coach at Tennessee and Memphis.

“I’m all about stressing the little things, technique, the fundamentals,” he said. “That doesn’t change with the position group.”

For more on Chad Scott’s transition to wide receivers’ coach, the Herald-Leader’s Jen Smith has you covered here.