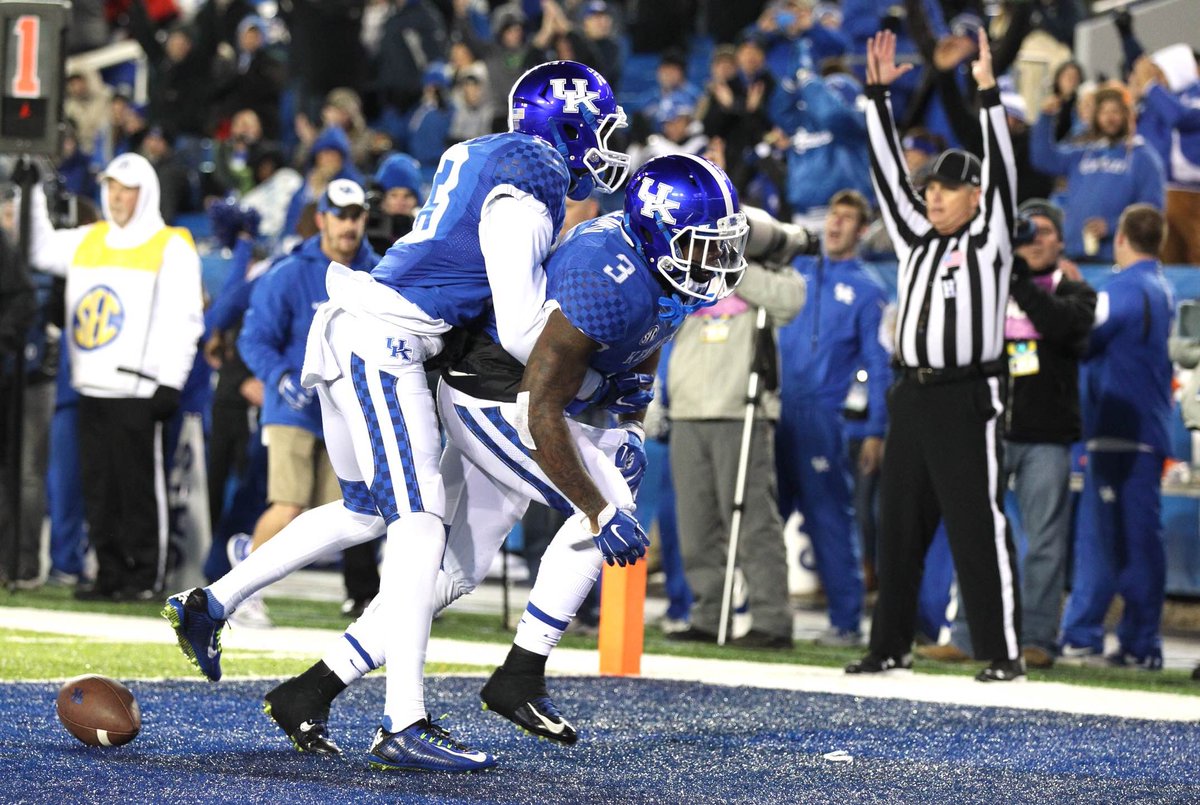 The Drew Barker era was ushered in by a ground explosion as Kentucky rushed the football 44 times for 415 yards. A snowy Commonwealth Stadium was sparsely occupied, but that didn’t detract from an exciting outing from a team that has frustrated its fan base for the better part of eleven weeks. Butts in the seats aren’t a right, they’re earned. On Saturday, UK did its part to regain the BBN’s trust in a dominating win over Charlotte.

Observations from the Frozen Tundra of Commonwealth Stadium

— Drew Barker managed the game. Wind conditions coupled with rain/snow made for difficult passing conditions. Barker was patient and efficient in his first start. Drew went the distance and finished the game 16-29 for 129 yards. Again, given conditions and circumstance of a first start scenario, Saturday was an effective beginning for the redshirt freshman.

— The much maligned offensive line excelled in run blocking, but is still lacking in pass protection. After focusing on the group, its deficiencies are mainly at Tackle. Center and guard play was exceptional.

— Speaking of those runners: JoJo Kemp, 11 attempts for 165 yards and 3 TD’s. Boom Williams joined in the fun with 16 carries for 150 and 2 scores. The Cats were 9 yards away from having three one hundred yard rushers as true freshman Sihiem King had 91 yards on just 5 runs and a touchdown. All above hit the hole at a higher speed than seen before.

— Kentucky is a better football team when it establishes the run. Lack of offensive line depth and the inability to secure the edge vs. elite pass rushers dictate this offense to be reliant upon the ground game. It’s not the Air Raid nor is it the ground and pound. I’m really not for sure what it is, but whatever it was on Saturday, it worked.

— First down continued to plague. If UK is to beat Louisville, it has to somehow manage to keep itself out of certain passing situations. 2nd and 10’s were too plentiful, again. Louisville is too talented on the edge to live behind the chains.

— On a night when it could, Kentucky simplified its game plan and executed plays that were consistently successful. This included a new power package that featured Jacob Hyde at fullback. The Lawnmower’s block on the poor Charlotte defensive back will be a highlight reel favorite. UK also had more success when running north and south. Boom Williams lost ten yards on run plays, many of which were on first down.

— The whole Dorian Baker/Drew Barker hysteria was debunked as the team’s leading receiver had zero receptions. Garrett Johnson led with 5 grabs for 33 yards.

— Kentucky picked up where it left off against Vanderbilt. However, the difference in Saturday’s game was the across the line of scrimmage action. The UK defense totaled 9 Tackles for Loss (TFL) and 4 quarterback sacks. Both were categories in which the Cats were ranked last in the Southeastern Conference.

— Senior Farrington Huguennin led the way with 6 tackles, 1.5 QB sack, and 3 TFL. Josh Forrest resumed his role as the team’s leading tackler with 8 before being taken out of the game for a much deserved rest.

— Sophomore Matt Elam got in on the Tackle for Loss parade and played a solid football game.

— Khalid Henderson, what can you say? He’s been a consistent linebacker on a defense that has lacked in that category. Henderson rushed the passer, was persistent against the run, and delivered the hit that led to Mike Edwards pick 6.

— One concern from the game was that Charlotte established the stretch run play off the read option look. The 49’ers rushed 48 times for 146 yards. But, it was only 3/17 on third down. Andrew Buie had 23 carries for 80 yards and QB Brooks Harden ran the football on 10 occasions for 70. The latter worries.

— Darius West displayed the talent that Mark Stoops and staff have been telling us about.  The redshirt freshman racked up 7 tackles and was a force on special team coverage units. Combined with fellow freshman Mike Edwards, the safety positions appear to be trending upward. Same can be said about fellow freshmen Derrick Baity and Chris Westry at cornerback.

— True freshman OLB Josh Allen, a former 2 star I might add, had one QB sack and 2 TFL. At one point in the game, Kentucky had six defensive freshmen on the field.

— Kicker Miles Butler had himself a night. Two kickoffs sailed through the end zone as he was perfect on the night in FG and PAT’s.

— Many had asked for this category. For the third consecutive game, Mark Stoops was faced with a 4th and 1 with less than two minutes remaining in the first half. On Saturday, he decided to punt. Result was zero late half points surrendered.

— The team was prepared and motivated. On a nasty evening, the Cats sustained inspiration through the elements and a less than capacity crowd. Winning is fun. Winning in a route is a blast.

— Between series, the sideline was busy. Assistant coaches were hands-on instructing technique as well as working the grease boards. A complaint I’ve had in the past are the “heater huddlers” or players more concerned with warming than participating. Didn’t see that vs. Charlotte. Players were engaged, coaches were coaching, and adjustments were timely. Before the remarks section blows up, yes I understand it was against Charlotte. But again, if you’re going to criticize, you have to be willing to praise.

— A similar punt return situation presented itself that was reminiscent of the 8 man out debacle from earlier this fall. Stoops and company handled it as eleven men were on the field to include a punt returner.

— As stated above, OC Shannon Dawson kept it simple and adjusted short yardage strategies. While racking up 544 total yards, not sure there are valid complaints. Improvements necessary? Absolutely, most noticeably in pass protection.

Truth is, Charlotte was not a very good football team. Going into the game, the spread was 24.5. UK hadn’t scored 24 points in a game since October 15. Racking up 58 while giving up just 10 can only be described as an efficient win over an opponent it should have beaten. Same could have been said against EKU which as we all know took an overtime session to secure the W. In the season’s opener, UK had to rely upon a late Mikel Horton touchdown to beat Louisiana.

Kentucky was better than Auburn and Vanderbilt. Both resulted in a loss. Forgive me for not being overly critical of a 48 point home win. For one, it gives a resemblance of pride back to a team that has taken a pounding on the field, in the stands, and from behind keyboards. Yours truly included. It also provided a spark going into an ever so important, Governor’s Cup week.

The argument that Mark Stoops inherited a depleted roster and that a three year turn around will take five years has been doubted and ridiculed. True, Kentucky may have 22 better starters, but an eleven game stretch has shown that it takes time to develop adequate depth. The lack thereof is obvious and has been magnified on the line of scrimmage. Reality is Kentucky needs more SEC quality players and more birthdays from its rookies.

Now, it’s on. Kentucky vs. Louisville for all the marbles. Win and go bowling. Lose, and well, that won’t be good. How will this team react? Will Saturday’s momentum carry over?  Will CWS be packed? We’ll have many discussions about the Cards. But for one cold November night, all was good in Commonwealth Stadium.