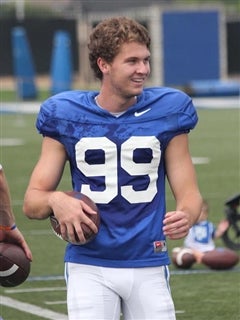 The good people behind the Lou Groza Award announced their preseason watch list today and Kentucky’s Austin MacGinnis is one of the 30 placekickers included.

MacGinnis made all 41 of his extra point attempts last season, a school record, and kicked the longest field goal in UK history, a 54-yarder at Tennessee. He also kicked the mindboggling field goal to even the score with Florida late in the fourth quarter.