1. You think something good is gonna happen
UK was pretty successful in their first drive. They moved the ball well, couldn’t finish with a touchdown, but it was encouraging to see something from the offense. Then the defense put them in even better position.

Wrong. Kentucky had four chances from the one and couldn’t get a touchdown.

Boom Williams was backed up, the worst place to let the ball loose so what does he do?  Lose the ball.  Vandy scored the following play, their first touchdown in the first quarter in 11 games.

3. But they gave it right back

The ship looked like it was going to sink.  UK punted the ball back immediately, but Vanderbilt had a gift in the form of a muffed punt.

4. A Big Whiff from Dorian Baker

It wasn’t the only time Dorian looked silly. His mind did not look present during today’s performance.

5. A Touchdown that Didn’t get Reviewed

Juice caught this pass in the back of the end zone.  It was called a touchdown, only to be overruled by another official.  It did not get reviewed by the booth. 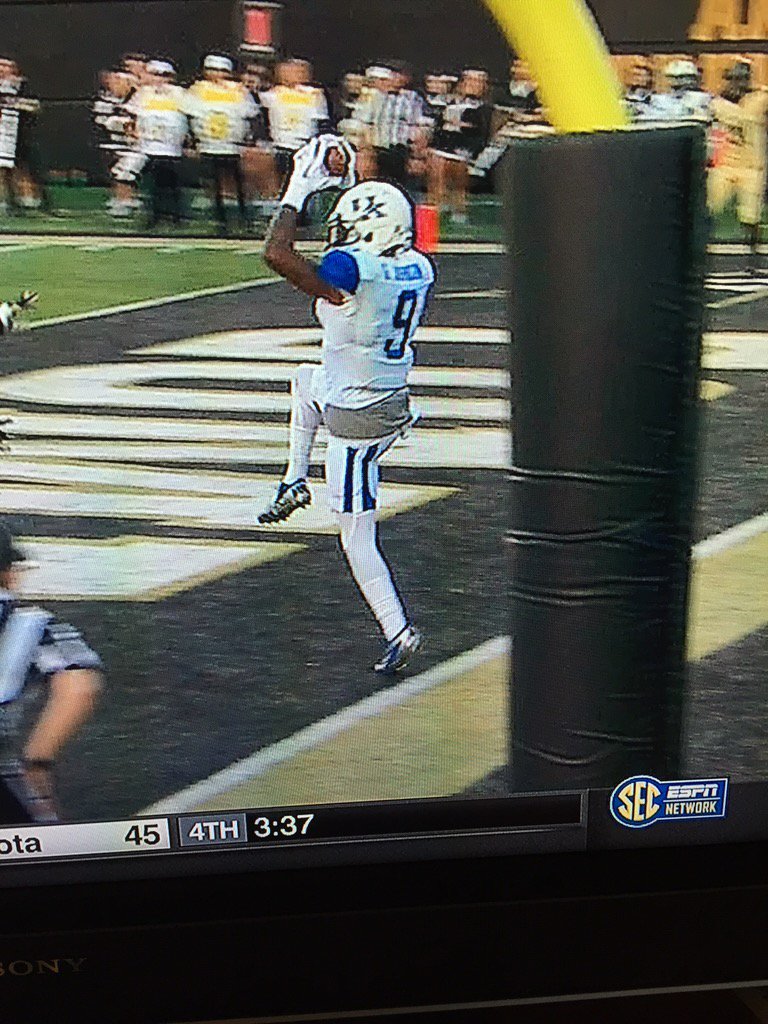 A fade to the short-side of the field? Sure, why not?  The play after Juice caught it in the back of the end zone, a terrible pass to Dorian Baker resulted in an interception.  It was the second time Kentucky had it inside the five but failed to put points on the scoreboard.

7. Giving the Keys to Barker

After the end zone interception it was Barker’s time to shine.

What do you do when you put in the backup QB?  After getting torched by plenty of backups we’ve learned that you ALWAYS GO FOR THE HOMERUN..  The crazy part is that it actually worked.

After dropping a potential touchdown on the first drive, Ryan Timmons had the redeeming play we’ve been waiting for, giving Drew Barker his first touchdown pass.

That euphoric high couldn’t last forever.  Drew eyed down his receiver, leading the safety right to the ball for an easy stroll into the end zone.

The play that will keep Stoops from getting any sleep tonight.  He was trying to draw Vanderbilt offsides, but then they saw a one-on-one on the outside.  So what do they do, throw the deep fade of course!  A flag could have been thrown, but the play never really had a chance.  The fallout was even worse.

They forgot about the 11th man on the field.  It was all Vandy needed to get a win.

There were five UK players covering him tightly, yet none of them could fall on it.

The booth did not review a play that was initially ruled incomplete.

Yes.  Kentucky had to call a timeout to punt the bowl.  It was the drive after Towles returned, leaving everyone with a sour taste in their mouth.

His 67-yard run kept Kentucky in the game.  He was stopped inside the 10 but Jojo Kemp punched it in to bring the game within 5 points.

Instead of trying to put the game within three points, they kicked the PAT to make it 21-17.  They didn’t forget about the opportunity, Stoops thought it was too early to go for two.  The way the offense was moving the ball, he was confident they could get another touchdown opportunity.

Kentucky was forced to kick a field goal.  It would have been to tie the game if they had previously converted the two-point conversion.  Instead, Jordan Swindle was confused and with only 10 on the field, UK took a 5-yard penalty, even though they called a timeout earlier to punt.  It backed them up too much and Austin MacGinnis just missed it to the left.

When they couldn’t afford to give up another score, they gave Vandy ideal field position after the personal protectors were stormed, deflecting Foster’s punt.

On third and short, they didn’t need much to get a game-winning drive going.  It was a little low, but it hit him in the hands.  Right. In. The. Hands.

20. Sacked on the Final Play

They couldn’t even attempt to pull off a miracle on the final play.  Only three people were rushing and they still got to Patrick Towles.  That is how you make “pathetic” into an art form.

CJ Johnson had a “WTF” moment by dropping an F-Bomb during postgame interviews.  It was the most accurate description of tonight’s game.