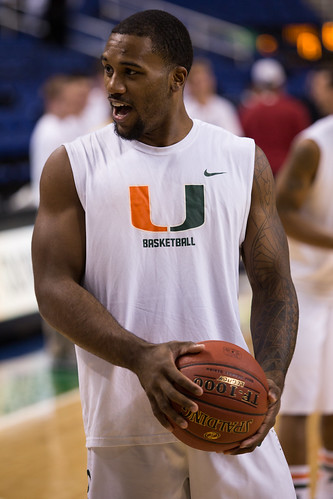 This past weekend former Miami Cane power forward made waves when he signed a free agent deal with the Indianapolis Colts despite having never played a down of football. Here’s the story from yahoo:

Most NFL prospects first donned shoulder pads and a helmet while playing for a local youth league team or for their high school.

Erik Swoope’s first football practice will be at a slightly higher level.

Swoope, a power forward on the University of Miami’s basketball team the past four years, signed with the Indianapolis Colts as an undrafted free agent Saturday night and is considered a candidate to make the team’s practice squad as a developmental prospect at tight end. The 6-foot-5 California native has never played so much as a snap of organized football at any level before.

So that all begs the question, if you were an NFL GM and you could draft any former Cat to play football which one would you take? Here are some of my favorites:

Mash was a freak athlete and like Swoope he could translate into a mean tight end. At 6-8 he’d be an even bigger target than basketball convert Jimmy Graham. Along with his wingspan and leaping ability he could be a lethal weapon for any QB in the league.

Bledsoe could be a wideout in the mold of Steve Smith. With the combination of speed and power that leads to multiple pro bowl selections Bled could but up big numbers just based off raw athleticism. Similarly built Tony Delk could be a nice target too.

The largest arms in Lexington could have been a mean force coming off the edges towards opposing QBs. Kelenna could be a JJ Watt type of player able to blitz opposing lines or use his long arms to disrupt passes.

Which former basketball player would you pick to put on the pads?

48 Comments for Which Former Basketball Cat Would You Draft?