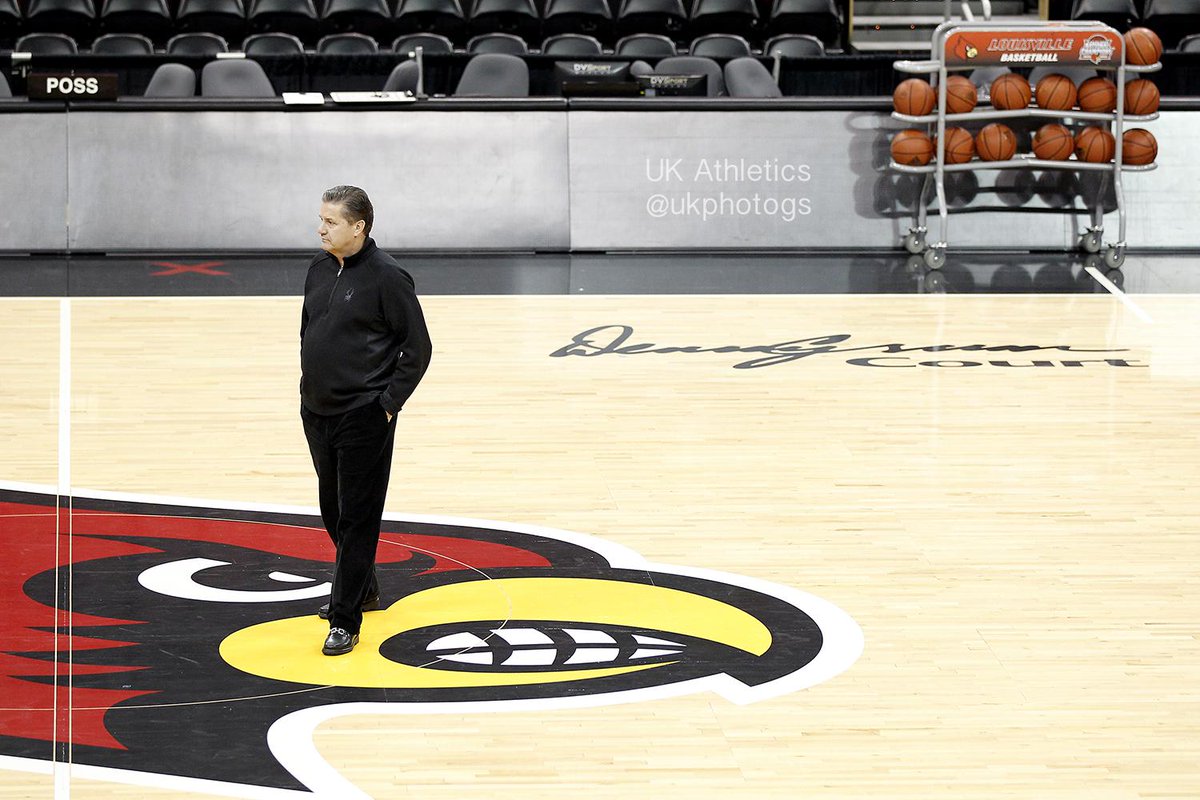 The Kentucky/Louisville game is all anyone can talk about in college basketball right now, and throughout the week, the national media has been weighing in with their thoughts. Spoiler alert: not many are picking the Cards.

We’ll never know if the ACC would have issued a one-game suspension to Montrezl Harrell for throwing an elbow against Western Kentucky, but we can hazard a guess. (Not bloody likely.) With Harrell in the fold, the Cardinals’ starting five can hang with Kentucky’s for a while. However, when the coaches dip into their benches, the Wildcats will own a huge advantage. I’ve long said that if Kentucky is going to lose a game, it will probably come in an unimportant game against a team it overlooks. That won’t be the case here.

No need to waste time. There are reasons to believe that Kentucky could lose, but they’re tied to the history of college basketball’s best rivalry game more than this season’s reality. In the past five seasons, John Calipari is 1-4 in Kentucky’s first true road game of the season. Per ESPN Stats & Info, the past five meetings between these two enemies have been decided by single digits. Plus, the Cardinals can swarm the Wildcats with full-court pressure (they’re seventh in defensive turnover percentage). Here’s the issue with all of that. Kentucky is still huge and is still playing the best defense in America. Its opponents have connected on just 32 percent of their 2-pointers, and they’re shooting 27 percent from beyond the arc. How do you get an offensive rhythm going against that, especially if you’re a Louisville team that doesn’t really stretch the floor (29 percent from the 3-point line)? But this is Louisville-Kentucky. And Rick Pitino ain’t lettin’ Calipari just walk into the Yum! Center and whip his squad. This will be a fight. That’s the only way with these two teams.

Louisville’s Chris Jones. Jones has come in for some criticism in the past few weeks, most of it deserved. But he is nonetheless a hugely valuable player for the Cardinals. His 4.5 percent steals rate is the highest on a team that is among the nation’s best at forcing turnovers, and when he is making shots — as he did against Indiana on Dec. 9 — he can be a genuine offensive weapon. If he plays to his outer limits Saturday, if he hassles UK’s guards and poaches run-outs before the Wildcats have a chance to install that nutso back line and doesn’t force things on offense, he could be the key. Emphasis on “if.”

College basketball’s best rivalry takes the spotlight in what will be the toughest game the Wildcats have on their schedule this season. John Calipari’s team has already beaten Kansas, North Carolina, and UCLA by a combined 85 points but none of those games were on the road. The Cards have the best back court in college basketball in Chris Jones and Terry Rozier along with arguably the front-runner for national player of the year in Montrezl Harrell. But in order to have a chance against Kentucky, Louisville is going to need a strong game from Wayne Blackshear on the perimeter in an effort to open up the Wildcats’ lethal defense. The 6-5 wing had 31 points and made six 3-point shots in Tuesday’s game over Cal State Northridge and he’ll need to be effective again if Rick Pitino’s team is going have a chance in the final 10 minutes of the game. If Blackshear produces and the Cards get use their relentless pressure to generate some easy baskets, things could be real interesting at the KFC Yum Center. If those things don’t happen, Kentucky’s brand — which seems to get exponentially bigger every single day — will continue to grow thanks to another convincing victory over a legitimate opponent.

John Clay also has a roundup of over 80 local and national media picks for the game, including mine, Matt’s and Ryan Lemond’s. Only four people picked Louisville to win. FOUR! Out of eighty plus. Click here to check it out.

24 Comments for What they’re saying about Kentucky/Louisville