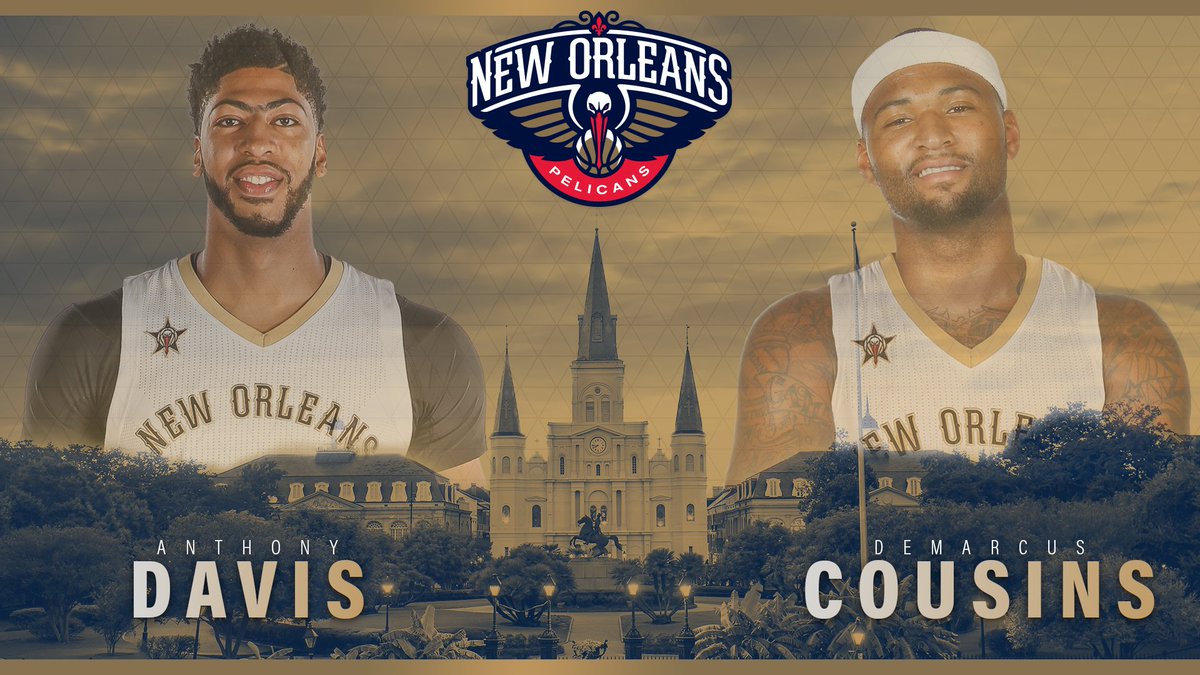 The pairing of Kentucky’s elite post players was the biggest story in the sports world today.  It was covered in a variety of angles from essentially every sports media institution.  Instead of wading through it all by yourself, let this post get you caught up.

While the rise of the positionless player in the NBA is well documented, New Orleans is now presented with an interesting spacing conundrum. Cousins and Davis represent two of the league’s premier big men, athletes that draw ample attention – and frequent double teams – in the half-court offense. They’re rare breeds who oscillate between the two frontcourt positions, power forward and center.

For New Orleans, the trade opens a new era with Cousins and Davis as a fascinating big man duo. This isn’t a traditional old school Twin Towers approach, as Cousins can stretch out to the three-point line and Davis is comfortable operating far away from the hoop. Both face questions regarding their defensive impact, and pairing the two together could produce stretches of mismatches against spread lineups. But this is a gamble that a shaky ownership group, a beleaguered GM and a helpless Davis all badly needed. Cousins’s arrival should spark interest in a team that’s been stuck for years, it should improve New Orleans’ pitch to future free agents (“We’ve already got two stars”), and most importantly it gives Davis reason to believe that his heroic efforts aren’t in vain.

Every time Cousins earned an All-Star moment, disarray hijacked it. NBA commissioner Adam Silver recognized Cousins’ overwhelming talents by naming him an injury replacement in 2015, but he spent the entire weekend addressing questions about the Kings hiring George Karl as head coach. Last year, Cousins had to address his ongoing feud with Karl. This year, Cousins avoided any upsetting questions the first two days, then the Kings put him in the awkward position of finding out that he could be traded moments before he was asked about it. “I was happy coming in, but the last day and the last couple of minutes, something had to happen,” Cousins said. “It’s disappointing.”

Pairing Cousins with Anthony Davis is the most fascinating frontcourt duo of the decade; there have rarely been pairings of two legitimate top-10 big-man talents. Marc Gasol and Zach Randolph patrolled the paint for years, while Blake Griffin to DeAndre Jordan’s air show made jumpstarted the Lob City Clippers, but this is different. We haven’t seen this before.

The Ringer’s Danny Chau asked on Sunday: “Is it too indulgent to imagine a 5—4 pick-and-roll with Cousins handling and Davis rolling to the rim?” I hope not. Pelicans head coach Alvin Gentry would be shorting himself if he doesn’t take full advantage of all the tactical possibilities this pairing presents. The Brow and Boogie can both handle the ball, shoot outside, dominate inside, and create space off the dribble like guards. While other teams are zigging by going small, the Pelicans are zagging with two of the most purely talented big players in the league.

Cousins has an unbelievable opportunity here. He gets to start over — in a city that will embrace him in a way that few will. You want a redemption story? New Orleans is a great place to find it. You want somewhere that wants its guys a little less than squeaky clean? Try the Big Easy. He joins a good friend and fellow Wildcat in Anthony Davis, who also happens to be a top-10 player.

He gets to change everything about his career. If he keeps his emotions in check (unlikely) and embraces the defensive end, he’s going to have a chance to do real damage in this league. Davis can play power forward next to him, and their combination of scoring, rebounding and passing is going to be a nightmare for opponents.

Davis gets the scoring partner he needed in NOLA and a chance to finally break through and make a splash in the Western Conference. The team is still painfully thin at the wings, and if Jrue Holiday gets hurt again I’m not sure who will play point guard (Boogie, maybe?). They have too many bigs as well — Omer Asik still has three (!) years on his deal.

But Davis finally has a partner in crime, and that might be enough. With Cousins commanding a double-team down low, Davis will have his pick of 15- to 18-footers. And if Boogie wants to step out to the perimeter and take 3s (which he can), Davis will have more room to work inside. This could work extremely well for both of them.

This is less about the trade and more about Boogie in general: nobody in the NBA gets their shot blocked more than Cousins.

Cousins’s shots get blocked 1.6 times per game, which represents a slight decrease from the 2014-15 and 2015-16 seasons, when opponents stuffed Cousins 1.8 times per contest. (He was the most-blocked player in those seasons, too.1) All of which is surprising, considering the 26-year-old’s clear advantages in height, strength and skill.

Before he was traded, I asked Cousins why he gets blocked so much, and he said that I didn’t have to search for a complicated explanation. “It’s because I can’t jump,” he said. “It’s really as simple as that.”