Clint Dempsey and Lionel Messi in a friendly in 2011

Tonight at 9 p.m. ET, the US Men’s National Team takes on Argentina at NRG Stadium in Houston, Texas in the Copa America Centenario semifinals. To say I’m excited about this game is a vast understatement. I realize some of you feel about soccer like I feel about baseball, so just scroll on down to the news portion of this post and let the rest of us geek out a bit.

Why is tonight so big? Not only would a win advance the USMNT to the Copa America finals, it would come against (arguably) the sport’s biggest star. Even though he’s been hampered by a back injury, Lionel Messi has been fantastic in the Copa America, putting up four goals and two assists in only 164 minutes of play. Seriously, three of those goals came in just 19 minutes vs. Panama. I’m lucky if I can roll out of my bed and get to the computer in 19 minutes, let alone score a hat trick in an international tournament.

Making things more difficult for the US are the suspensions of Jermaine Jones, Bobby Wood, and Alejandro Bedoya, three starters who have been an integral part of the US’ run so far. Replacing them won’t be easy, especially against a star like Messi and a squad like Argentina. Alas, this game is going down on our home turf and we must protect this house. If the travel gods align, I should be in New York in time to watch the game at Jack Demsey’s, so save me a seat, Vinnie. I believe that we will win.

Now, let’s turn our sights back to what’s happening in UK land (welcome back, soccer haters)…

Charles Matthews is transferring to Michigan

Jeff Goodman broke the news late last night that Charles Matthews is taking his talents to Michigan. The Chicago native averaged 1.7 points and 1.6 rebounds in 10.3 minutes per game in his freshman year at Kentucky, and announced his intent to leave the program last month. Best of luck to him in Ann Arbor.

John Calipari will hold a pre-draft teleconference at 10:30 a.m.

The NBA Draft is coming up on Thursday, so John Calipari is holding a teleconference today at 10:30 a.m. to discuss Skal Labissiere, Jamal Murray, Alex Poythress and Tyler Ulis’ prospects. UK is asking that questions be limited to draft stuff only, so don’t get your hopes up for more jabs at Pitino other than that oh-so-awesome and ever-so-passively-aggressive reminders that he’s going to be in New York to represent his guys, who will join his other guys in the league. Did you know UK has so many guys in the league? Because it’s a lot. Have you ever wondered if one day, half of the guys in the NBA All-Star Game might be from UK? What a novel concept!

I’ll have notes from the teleconference later this morning.

Cal will be all over ESPN on Thursday

Just in case we don’t hear enough from Calipari today, he’s going on a media tour on Thursday before the Draft. Cal is scheduled to make five appearances on ESPN Thursday, starting with Mike and Mike at 8 a.m.:

Cal will also be in the green room with Jamal Murray and Skal Labissiere Thursday night.

Willie Cauley-Stein shows off his boat 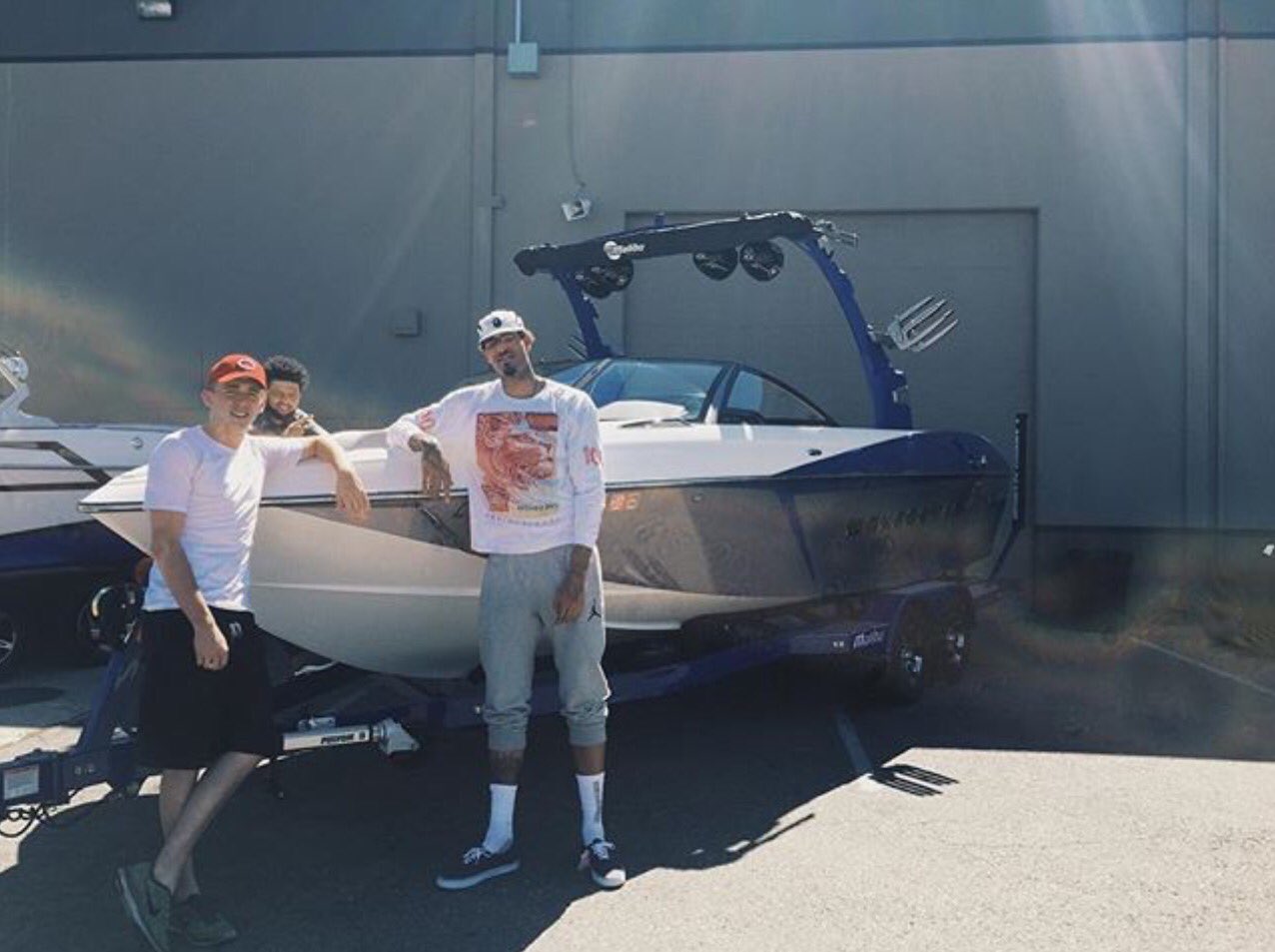 On last week’s show with me and Jennifer Palumbo, Willie Cauley-Stein mentioned that he had recently bought a boat. Last night, this picture of the boat showed up on Twitter. For you boat buffs, it’s a 2016 Malibu 25 LSV. Willie said this has been his only splurge as an NBA player so far, so here’s hoping we get to see some pictures of Willie and his dogs, Benji and Brodie, cruising on it this summer.

Today is Derek Willis’ birthday, and even though he’s gone through some major adversity in the past week and a half, I know the entire BBN wishes him a happy 21st. Derek won’t only get Mrs. Cal’s brownies today, he’ll get a great cake from his girlfriend:

HAPPY 21ST BIRTHDAY TO THE BIGGEST BLESSING IN MY LIFE. I LOVE YOU @derek_willis33 pic.twitter.com/VyhY6wTOLz

Drew Franklin’s favorite restaurant promised to give away free tacos if an away team won on the road in the NBA Finals, and the Golden State Warriors and Cleveland Cavaliers did just that. To get your free Doritos Locos Taco, go to any Taco Bell location from 2-6 p.m. today.

“Pardon My Take” takes over KSR

Today could be the most interesting day of Matt’s vacation because @BarstoolBigCat, @PFTCommenter, and Hank are hosting the show. The three are the forces behind the popular “Pardon My Take” podcast, which Nick told you all about last night. Shannon, keep your finger on the dump button…