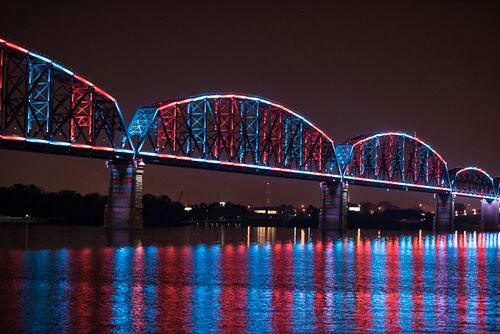 With UK’s trip to Vegas, a Governor’s Cup win, a UofL Heisman winner and another scandal, next week’s Kentucky/Louisville basketball game has been lost in the shuffle.  The rivalrying begins NOW.

The Big Four Bridge is letting the fans decide its color for December 20-21.  All you have to do is donate a little money to Waterfront Park.  The fan base that donates the most money here, will earn the right to have their school colors light up the Louisville skyline from dusk till 1:00 a.m. on the day before and the day of the big game.

You probably are reluctant to fork over cash, but the money is going to a good cause.  It will also prove that UK owns the city of Louisville when Kentucky fans leave victoriously from the Yum! Center to see blue lights illuminating the Ohio River.