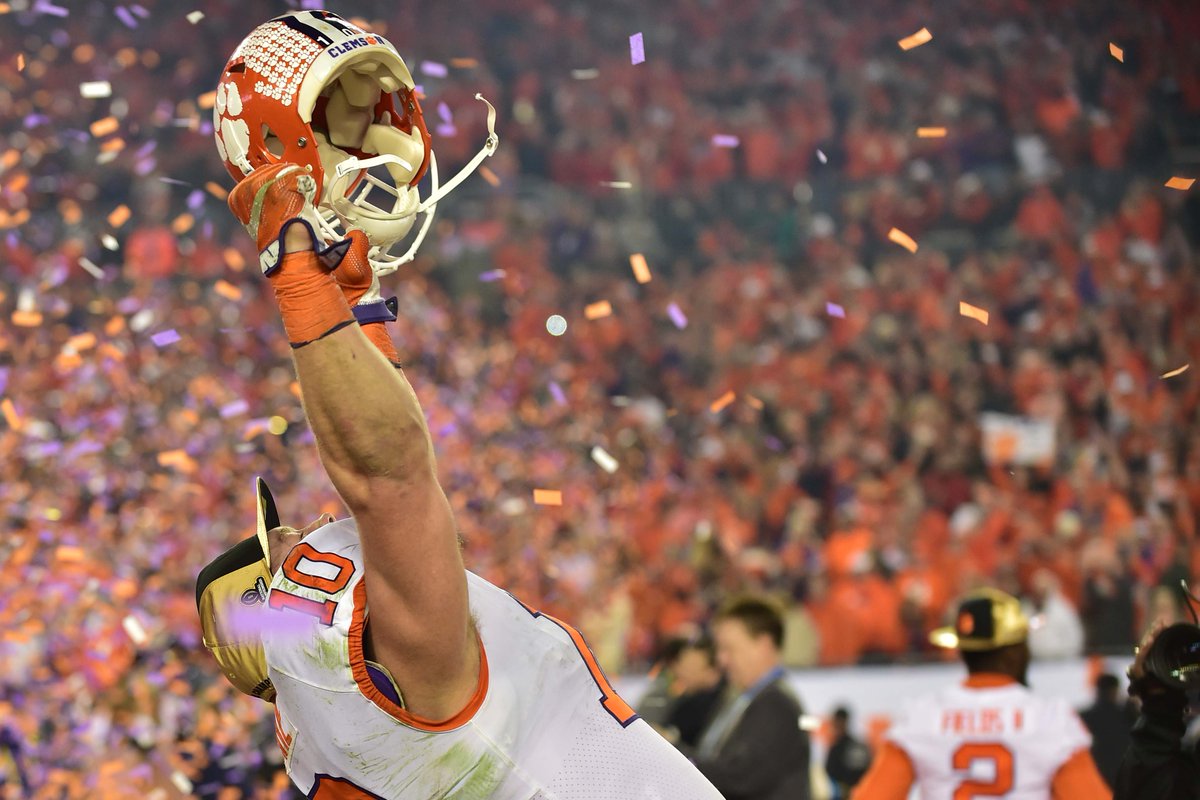 In the last year we saw Villanova beat North Carolina on a buzzer-beater, the Cavs erase a 3-1 deficit against the 73-win Warriors, and the Cubs win the World Series in Game 7, in extra innings, on the road, against the Cleveland Indians.  Some how, some way, this year’s College Football Playoff rematch between Clemson and Alabama was just as great.

Alabama entered the fourth quarter with a ten-point advantage.  Under Nick Saban, they never lost a double-digit lead entering the fourth quarter, until last night.  There were THREE touchdowns in the final four and a half minutes.  After Clemson took the lead, Bama converted on a fourth down (a la Damien Harris), threw a double pass, then Jalen Hurts scrambled for a 30-yard touchdown.  Bama left 2:07 on the clock.  Clemson only needed 2:06 to get the win.

It was a late night, ending after 12:30, but well worth the wait.  As great as the game was, the side stories were just as good.  Bill Walton led the charge. 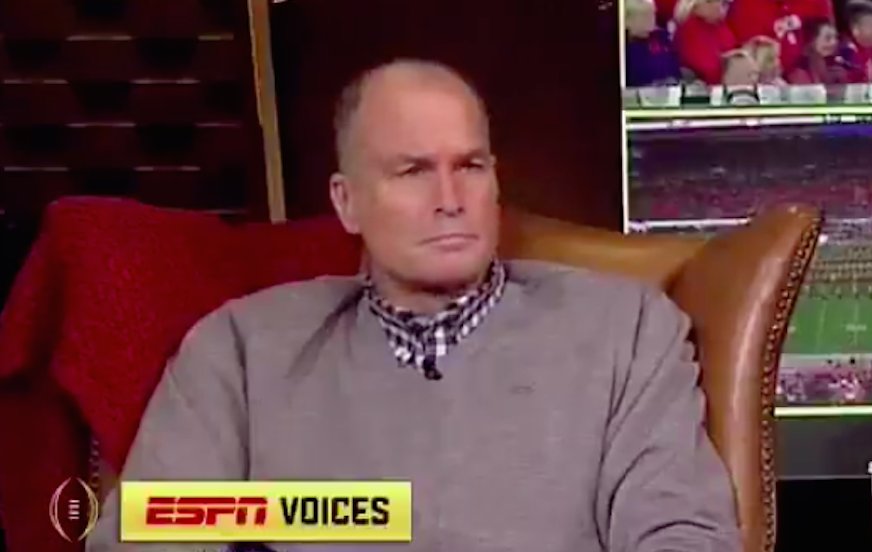 Of all the talking heads, I don’t think anybody called it quite like Mr. Patrick Towles.

The Crimson Tide lost, but they aren’t the night’s biggest losers, we are.  For the next 229 days, we’ll be without college football.  TGFKB (Thank God For Kentucky Basketball).

The Vanderbilt Commodores are 10-point underdogs when they host the Kentucky Wildcats tonight at 7:00 on ESPN.  Vandy looks different without Kevin Stallings on the bench.  Bryce Drew’s squad is 8-7, 2-1 in SEC play.  They’ll try to bounce back tonight after receiving their first loss in conference play Saturday at Alabama.

The coaches have changed, but Vandy is still a set-heavy team that loves to jack threes.  They make them too.  Vandy shoots over 40 percent from behind the arc, averaging 10 makes per game.

Here’s what Cal had to say about it during yesterday’s press conference:

“The crazy thing is that I thought I wouldn’t have to watch last year’s Vanderbilt tapes. Why is that?” He asked reporters, who replied that Vandy has a new coach. “Really? That’s what you would think and then I watched my first game tape and they’re running the same stuff that they ran a year ago. So now I had to go back an start watching our game tapes from last year with them. It’s smart. They’re a terrific offensive team with 3-point shooters. That’s how they played, and they’re running almost all of the stuff with adjustments, but it’s mostly the stuff that they ran a year ago.”

Their Gym is Still Stupid

Who’s on their bench is different, but they’re still in the end zones.  I despise the setup, but Mychal Mulder said it’s not so bad.

“It’s not crazy, it’s just a further walk to the scorer’s table if you ask me,” Mulder said yesterday. “Interesting way their court is set up, but what’s most important is what goes on between the lines, if you ask me.”

The Last Day Before the Start of Classes

UK’s spring semester begins tomorrow.  That means John Calipari will be able to talk about Hamidou Diallo on tomorrow night’s call-in show.  Yesterday he had to give a “Who are we talking about?” when asked if any new players were on campus.

This also means we’ll hear from new football players.  We have a good guess on about eight midyear junior college transfers and early high school graduates, but we won’t get exact names numbers until after tomorrow.

This will make things worse.  If only KY Wildcats TV made this video five, ten, fifteen minutes longer.

The Unibrow was blowing away the Derrick Rose-less New York Knicks.  In just 29 minutes he had  40 points, 18 rebounds and three blocks.  He was forced to leave the game before the end of the third quarter when he was pushed into the first row of the stands while driving to the basket, seen below.

Fortunately, the x-rays on his hip were negative.  He’ll be day-to-day moving forward, returning after the bruise heals.

Trae Young Did THIS with a Basketball

I grew up in the And 1 era and I’ve never seen anything like this.

Was this ball fake by @TheTraeYoung legal or not?
We know what @rayfordyoung thinks! pic.twitter.com/nBhsP9A0TH

I know getting Young to Kentucky is a longshot, but he’s so fantastically original I gotta keep sharing this stuff.

UK is hosting tryouts for those who wish to play “Take Me Out to the Ball Game” on a regular basis at Kentucky baseball games this spring.  Tryouts will take place on January 24th at John Cropp (Softball) Stadium, from 6 p.m. until 8 p.m.  Potential organists should bring their own keyboards and will be required to provide the cable hookups.

It’s L.I.T. Week at Valley High School, showcasing the Top 20 teams in the city of Louisville.  A look at the bracket: 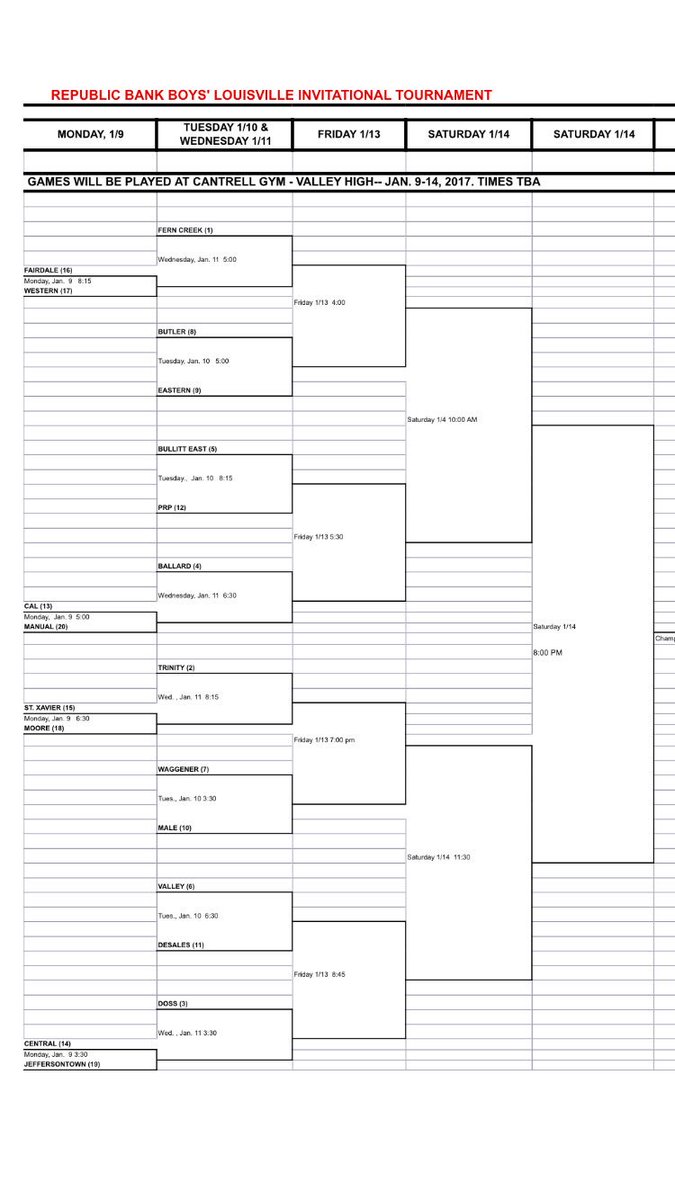 Hear Matt respond when KSR begins in one hour.