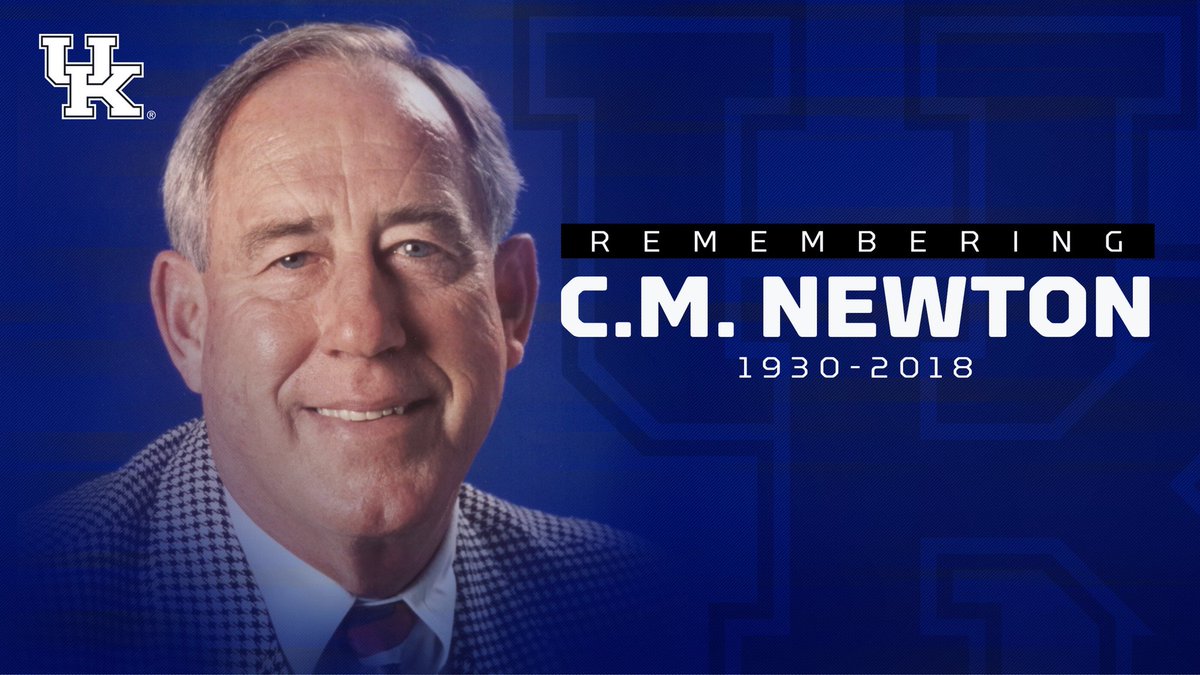 Last night former Kentucky Wildcat C.M. Newton died at the age of 88.  Newton was a National Champion on the basketball court, a pitcher on the baseball diamond and the football grounds bear his name.  That’s just a small sample of what Newton accomplished during his incredible life in athletics.

Widely regarded as the man who saved Kentucky basketball, as UK’s athletic director he convinced Rick Pitino to leave the New York Knicks to resurrect the probation-plagued basketball program.  He hired UK’s first men’s and women’s basketball African-American head coaches, and integrated the University of Alabama’s men’s basketball team.  That’s what he’s best known for, but the more you learn about Newton, the more you realize he had an even greater impact on the game.

“His contributions to the sport of basketball continue to this day,” Mitch Barnhart said. “As chairman of the NCAA rules committee, he introduced the shot clock and the 3-point shot. For decades, he worked tirelessly to promote international basketball and was well-rewarded by his election to the Naismith Hall of Fame.”

Newton’s most iconic contribution to international basketball happened in the early 90s when he helped create the Dream Team as the President of USA Basketball.  The team that wowed Americans inspired players all around the world to pick up a basketball for the first time.

Newton’s legacy will last for years.  Last night tributes rolled in from aross the country.

An hour or so ago, C.M. Newton passed away. Please keep him and his family in your prayers. During one of the most trying times of our athletic department, he came to the rescue and put us on the path we are today. May you rest in peace, my friend. pic.twitter.com/InGk58yQzB

We lost a wonderful person today in C.M. Newton. I want to first send out our dearest condolences to his wife, Nancy, his three children and all of their relatives. Coach Newton has been a mentor for me for a number of years and has guided my career from the first time I met him.

He has always encouraged me and other coaches to be involved with the NABC and help influence the game of basketball. He was a pioneer in a lot of areas, including having the courage to hire an African-American as coach at Kentucky and to recruit African-Americans at Alabama. He was a man that didn’t see color and was a genuine, caring man that we’ll miss dearly and that we loved dearly.

So very sad to hear of the passing of C.M. Newton. One of the most influential and iconic figures in the history of the SEC. And one of the nicest and kindest individuals. What an incalculable loss.

RIP to former Alabama and Vanderbilt coach and Naismith Hall of Famer C.M. Newton. Coach Newton was a great man that always had a kind word for everyone. He made the game so much better. pic.twitter.com/C0EZIVfhPE

We are saddened to learn that our friend and colleague C.M. Newton has passed away. C.M. served and led within the @SEC in many ways including as a student-athlete, coach, athletics director and as part of our staff. His legacy lives on through the many lives he touched.

C.M. visited practice one day and had a question about a specific play. We went to QB room afterwards and watched the tape. He wanted to know the “why” of the play. I was humbled-proud he chose me to ask. One of the better 30 minute discussions of my life. #Legend #Leader

When CM Newton became athletic director at Kentucky he said he wanted his program to "exude recognizable class." Then he set about showing everyone what class looked and acted like, every day. A great gentleman and leader. RIP CM.

Saddened to hear of CM Newton’s passing. He was a great gentleman that I really enjoyed getting to know and becoming friends. Great memories of watching his teams at Alabama when I was a kid in the 70’s. Great ambassador for basketball in the state. RIP Coach Newton.

A larger than life figure, Newton forever changed the University of Kentucky and the Southeastern Conference.  May he rest in peace.

The Cats are Here

If this kid played for Duke it wouldn’t be called a foul. pic.twitter.com/mmHTNLlk1Z

You come for the free t-shirt and stay to have your shot swatted into next week! pic.twitter.com/78X2EVw1mM

Hjelle is a Giant

Fate made the 6’11” UK pitcher a San Francisco Giant.  The 2017 SEC Pitcher of the Year was selected in the second round of the MLB Draft at No. 45 overall, the highest selection by a UK pitcher since 2011.  A handful of other teammates will join Hjelle in the professional ranks later today during rounds 3-10.

The USL club has advanced to the fourth round of the U.S. Open Cup, bringing MLS competition to the Commonwealth for the first time.  The New England Revolution stand between the boys in purple and the Sweet 16.  The game begins at 7:00 at UofL’s Lynn Stadium and can be heard on Talk Radio 1080 or streamed online with WAVE-3 News.

This Shouldn’t Be Possible

And you thought you were good at ping-pong.

4 Comments for Today on KSR: A Salute to C.M. Newton