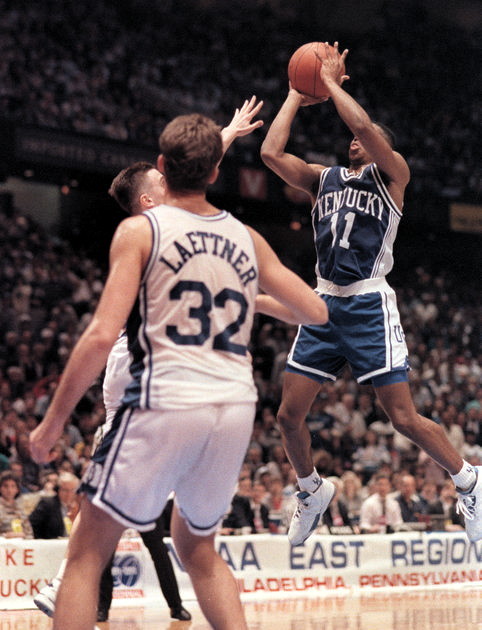 Next Tuesday marks the 25th Anniversary of the game many Kentucky fans would rather forget.  The fateful conclusion ended a season, but cemented The Unforgettables into Kentucky basketball lore forever.

Since their Kentucky careers came to an end, Sean Woods, Deron Feldhaus, John Pelphrey and Richie Farmer have led very different lives.  Two have become coaches, one a politician, another a golf course manager.

In the fantastic feature, Forde details their brief triumphs and falls from greatness.  Nobody fell harder than Richie Farmer.  Once a candidate for Lieutenant Governor, Farmer recently declared for bankruptcy after serving 20 months in federal prison.  Farmer’s words to Forde are gut-wrenching.

“It’s been the most difficult thing I can ever imagine,” said Farmer, a divorced father of three boys. “The people of this state have been great to me my whole life. I want to say thank you to all of them.

“I would like to work dealing with people. I know I have a lot of support and would be an asset to a company. I know the Lord will lead me in the right direction.

It’s difficult to do the article justice in a blog post.  An emotional roller coaster ride, their stories are not easily told, but this is well done and worth your time.

Forde: From immortal to quite mortal, Kentucky’s Unforgettables face midlife challenges 25 years after their greatest moment

5 Comments for The Unforgettables 25 Years Later