How ya feeling today? A little stuffed? Well get over it and get your mind right for Kentucky basketball because the Cats tip off in eight hours. John Calipari and the guys are down in lovely Miami for a meeting with South Florida in the conclusion of the Basketball Hall of Fame Classic. The game is also the first of a double-header, preceding Ohio State and Memphis on the same floor.

Before you head to the kitchen to heat up some leftovers, digest these game-related notes this morning…

Kentucky opened as a 22.5 point favorite.

Before you unload on that line, keep in mind Calipari won’t run up the score on Orlando Antigua. Any other coach and I think UK covers.

UK Athletics has a cool photo gallery from yesterday’s practice.

The Cats used American Airlines Arena for a Thanksgiving Day practice yesterday. The good people at UK Athletics have a photo gallery from the day here. 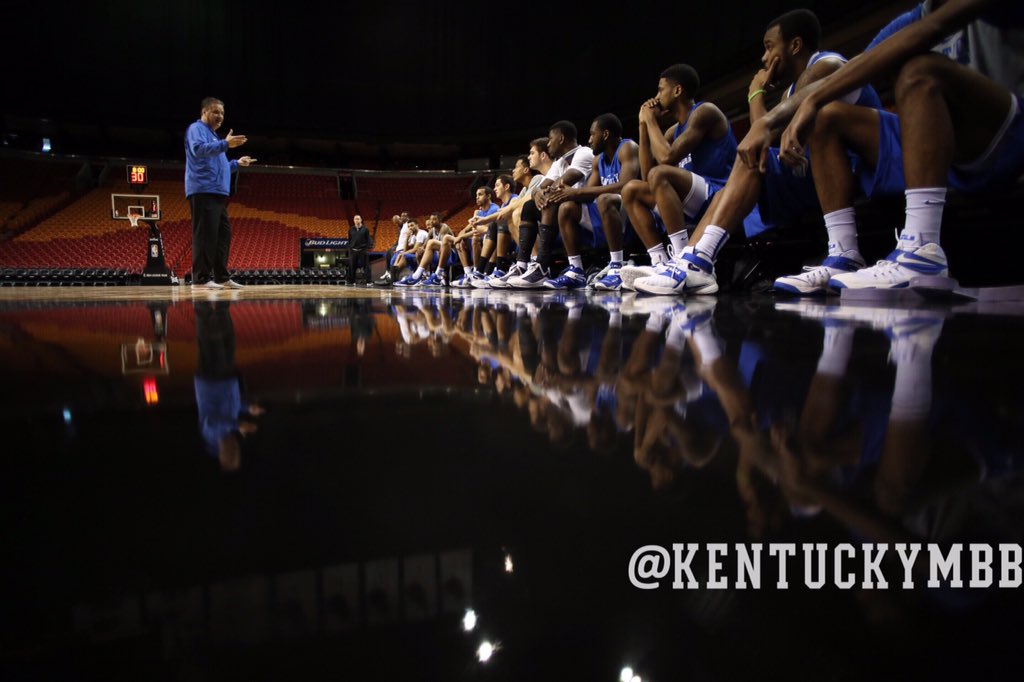 Are you ready for Ryan Ruocco and Kara Lawson?

That’s your broadcast team for today’s game. Fun fact about Ruocco: he is the fill-in for our friend Ian Eagle on Brookyln Nets broadcasts. #TheMoreYouKnow

With his 15 and six in Tuesday night’s victory, Ulis became the first Wildcat to have at least 15 points and five assists in three consecutive games since John Wall in 2010. Wall did that a lot. He averaged 16.6 points and 6.5 assists per game in his only season in Lexington.

It had been over two years since Poythress’ last double-double, before doing it in consecutive games against Wright State and Boston. Today he’s out to make it three straight, which would bring his career total to five.

It got its first win earlier this week against Albany after four straight losses to begin the year:

The Bulls’ leading scorer is a freshman named Jahmal McMurray.

That’s going to get a little confusing.

Monmouth beat Notre Dame and you need to see the locker room celebration.

The Kentucky Sports Radio pregame show will begin at 2:30 pm.

No morning KSR today, but you can listen to Matt, Ryan and me on the KSR pregame show at 2:30 pm. It’ll make for good listening as you wind down from your Black Friday shopping.