This weekend was the first in many my husband and I had very little to do (other than yard work). So, because we don’t have a pool, we spent plenty of time perusing Netflix. Thankfully, I remembered a recommendation from a friend and tried “The Great British Baking Show” Saturday afternoon, and, much to my surprise, I loved it. I am not a fan of cooking shows, nor am I a fan of baking in general, but the no-frills style and the British wit made for some very enjoyable binging. I hear there are other seasons online somewhere, so if you need me between NBA Summer League games, that’s where you can find me.

Also, as someone who loves meat, the English put way too much in their pastries. Or, as I learned they called them, savories.

With that, let’s look over today’s agenda…

Nick Roush and Freddie Maggard are in Hoover, Alabama this week for SEC Media Days, the league’s four-day bonanza of football, media guides, and Dr. Pepper products. I covered the event for KSR the past three years, but was happy to hand the reins to our football gurus this summer so they could get their first taste of the chaos. Last night, I gave them both my SEC Media Days tips, which included: 1) Wear layers, because the ballrooms are freezing; 2) BYODC (Bring your own Diet Coke); and 3) Ride the Escalator of Disappointment as many times as possible. I can’t wait to both read and hear the material they start churning out. Here’s today’s schedule (all times Eastern):

Send any questions you’d like Freddie or Nick to ask to @FredMaggard or @RoushKSR. I doubt Freddie will sleep all week from the excitement.

The preseason depth chart is out

Freddie and Nick got their hands on the 2016 depth chart last night. If you missed it, click here.

ICYMI, Andrew Harrison earned a deal with the Grizzlies

After spending his first season with the Memphis Grizzlies in the D-League, Andrew Harrison needed a big performance in the Las Vegas Summer League this past weekend. He delivered, putting up 23 points, 4 rebounds, and 4 assists on Friday night. His stats weren’t quite as impressive on Saturday, but yesterday, he got the news he was waiting for. The Grizzlies signed Andrew to a 3-year, $3 million deal, very welcome news for the former Cat, who has worked hard to earn himself a place in the league.

Devin, Tyler, and Trey tore it up in the Summer League last night 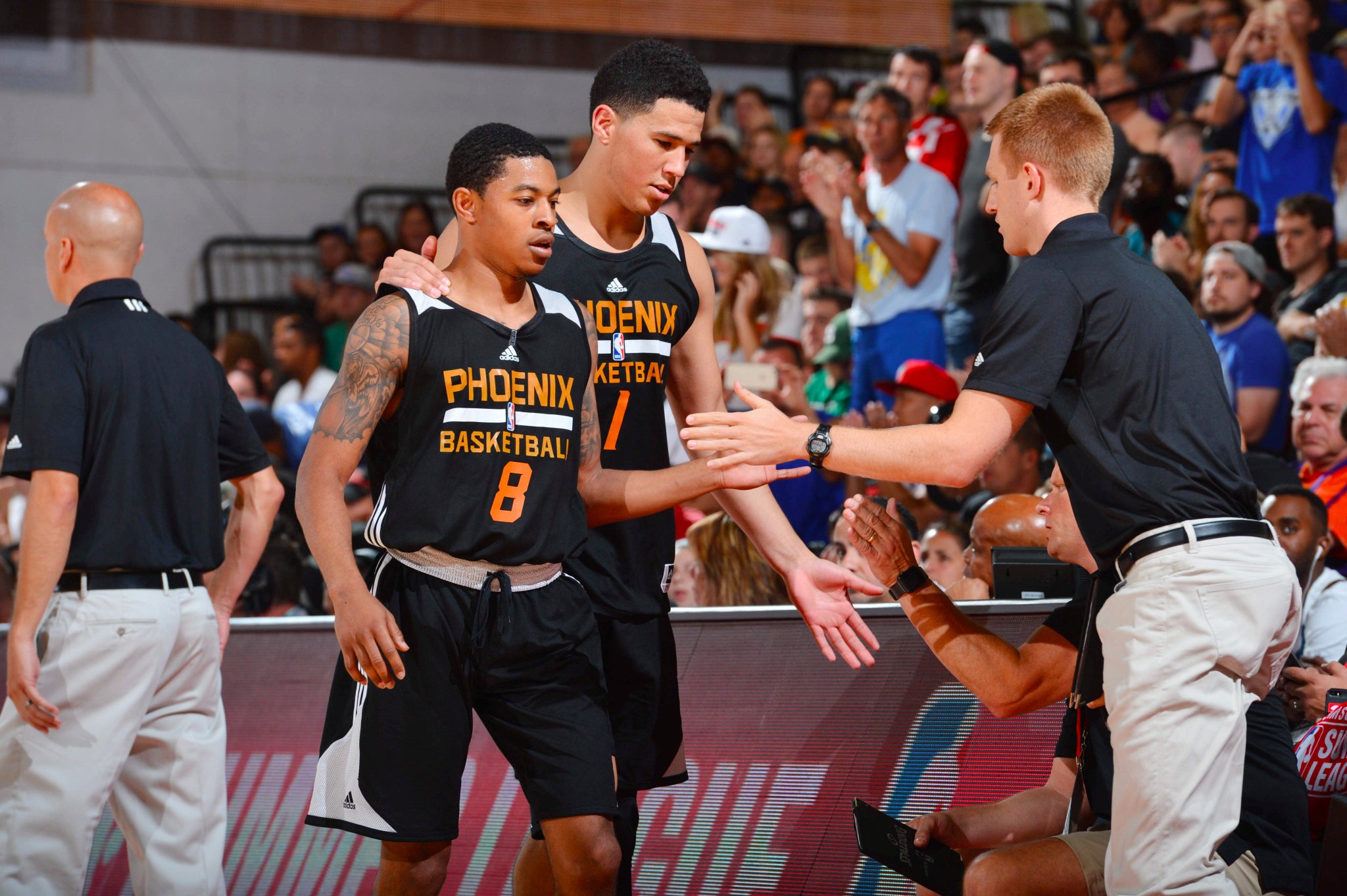 Devin Booker and Tyler Ulis were impressive again last night, turning in 24 and 10 points respectively. Booker had 7 assists, while Ulis had 5 assists, 6 steals, and 0 turnovers; in fact, through two games, Ulis has an assist-to-turnover ratio of 12-1, efficiency that shouldn’t come as a surprise to any of us. Here’s a classic Ulis to Booker moment last night:

Trey Lyles continues to tear it up as well, putting up 28 points against the Wizards. He’s now averaging 22 points through four summer league games. 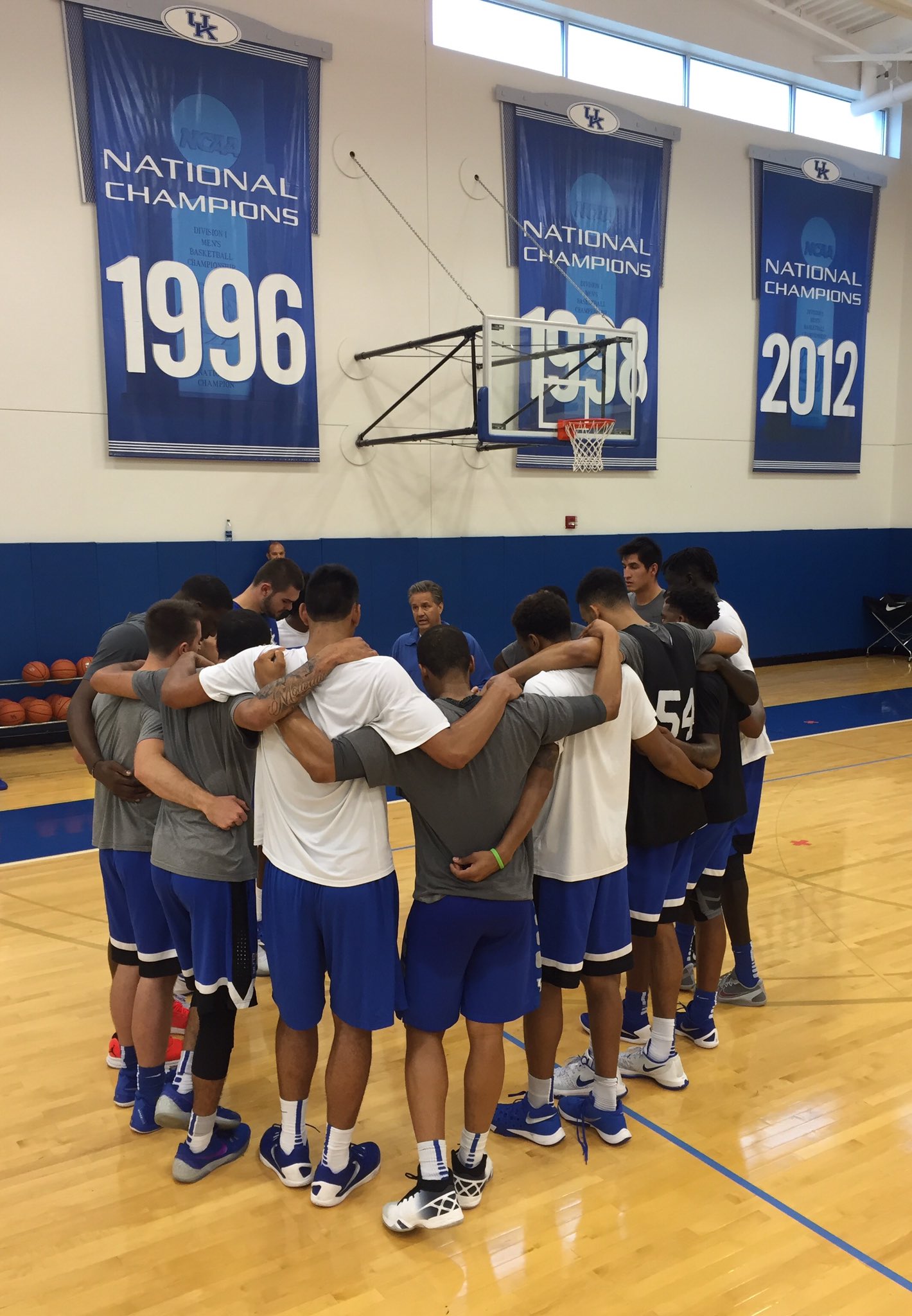 Leave it to Calipari…while most people would want to put their feet up and watch TV after a weekend on the road, he spent his Sunday evening thinking of ways to better the game. His latest suggestion has to do with fouls:

Everything in our game trickles down. Watching games this weekend and see that every close out to a jump shooter results in a foul. It’s obvious we are teaching this. There should be NO CONTACT TO THE BODY THROUGHOUT THE SHOT. Elbow, wrist tap, stomach tap, etc. You want scoring to go up? Automatic foul if the shooter is touched before his feet hit the floor. This my next mission.

That was my main takeaway from the coverage of the Peach Jam. Young put up 28 points and 11 rebounds to help Mokan Elite beat Quade Green, Mohamed Bamba, and the PSA Cardinals for the Peach Jam title. Young averaged 27.6 points, 4 rebounds, 6.4 assists, and 3 steals during the tournament, and, in head-to-head matchups, outplayed Green and Tremont Waters, UK’s other 2017 point guard prospects. Young will cut his list soon, and while Kentucky will definitely be on it and is considered his frontrunner, they’ve got some work to do to get him out of Oklahoma.

KSR is in Louisville today

But where?? Find out in about an hour.