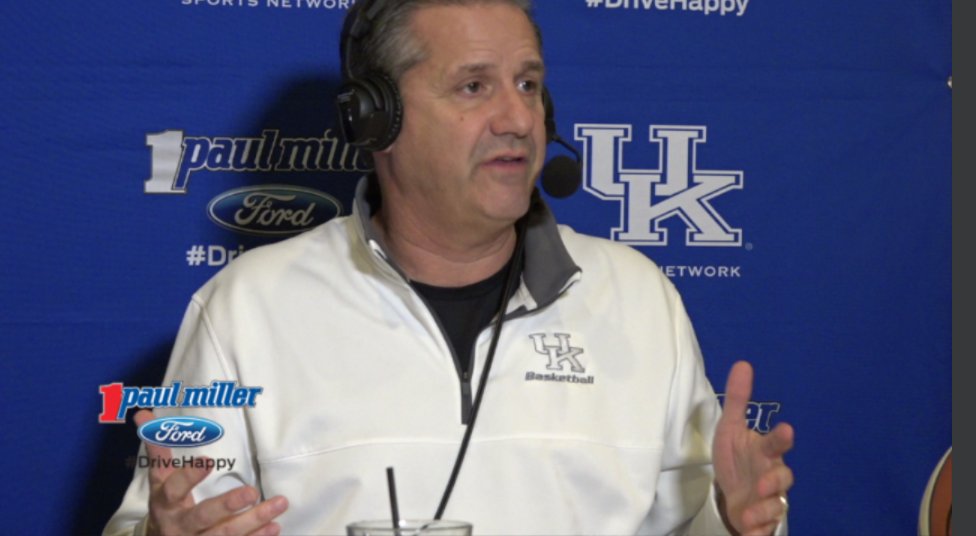 —  Preaching Empowerment.  Over the last three weeks, he’s seen his players slowly understand what’s expected of them.  Calipari believes players handle adversity best not if he can coach them through it, but if they can coach themselves through it.

“When they’re empowered, that’s when I know I can sit back,” Cal said.  “It’s time for me to step back a little bit and they gotta be responsible for each other. ”

He wants the players to hear less from him, and more from each other and the assistant coaches.  That’s why KP and Barbee were given more responsibility.

—  “I was tough on guys today.”  Just because he wants his players empowered, doesn’t mean he’s not going to coach them at all, especially at practice.  When they weren’t confident, he let them have it, echoing the message he shared at today’s press conference.

—  An NBA name-drop.  While preaching confidence, Calipari brought up one of the most confident players he ever coached, Sam Cassell.  This is the quote Cassell allegedly shared with Cal.  I use the word “allegedly” because it’s hard to remember stuff verbatim from 20 years ago.

Calipari liked Hawkins’ confidence from the Alabama game.  After opening with a terrible air ball that barely hit the backboard, Hawkins forgot about it and played a great game.

—  More praise for Dominique Hawkins. “One of the great kids of all-time and a great athlete.”

—  A Super Bowl reference.  The last time Kentucky played Tennessee, they had a quick trigger.  While the Cats had the ball out of their hands, the Vols worked it around and made multiple passes before taking a shot.  “What happens is you end up on defense for 75% of the time?” The answer to his question was: Tom Brady will make your puny defense pay in the Super Bowl.

—  The Cats have to learn to play with a lead.  Calipari isn’t the first person in Kentucky to say that.

—  Calipari appreciated seeing C.M. Newton.  “I’m just so happy he came to the game.”  Cal appreciates having the people that came before him close to the program.  He also likes seeing family members of his former players.  Cal giggled a bit when he mentioned the dance Eric Bledsoe’s grandma did in the locker room after the game.

—  “We need more dog fights.”  He plans on seeing one tomorrow night in Rupp Arena.  “I fully expect Tennessee to play one of their better games tomorrow.”

—  A Donald Trump impersonation. It wasn’t an impersonation per say, he simply took a page from the President’s playbook when discussing attendance on the road in the SEC.  “I don’t care what the numbers said, did you see the pictures? It was packed.”

To read more from his show, click here, or skip the reading and watch the replay.