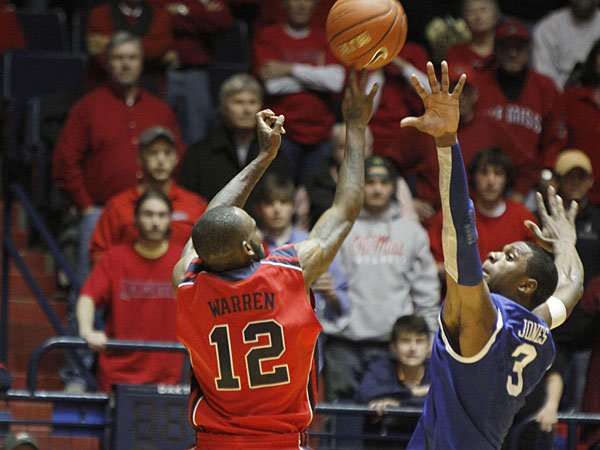 5-Game Win Streak: The Cats are winners of five straight over Ole Miss dating back to the SEC tournament era. The Rebels have only defeated Kentucky once in the Cal era and that win came on a Chris Warren buzzer beater against Brandon Knight’s team. Kentucky holds a 102-13 advantage in the series dating back to the teams first meeting in 1925. Expect the 23 point favorite boys in blue to push the margin to 90 tomorrow night.

4 returning starters: Aaron Jones, Anthony Perez, Sebastian Saiz, and Jarvis Summers all started last season when the Rebs traveled to Rupp Arena. Kentucky rolled to an 80-64 victory as they held Marshall Henderson to 6-18 shooting. When the Cats went to Oxford they similarly cruised to a 84-70 to give the Cats some of the only consistency during last February. Even when the Cats are struggling, Ole Miss is never a problem.

Triple Double- Willie Cauley-Stein nearly posted one last season when the Cats hosted Hotty Toddy in Lexington. WCS went for 18 points, 11 rebounds, and 6 blocks off the bench to completely dominate the Rebs. The junior year version of Willie is improved in nearly every aspect of his game and should dominate every single 6’9 player that Ole Miss can throw at him. If Cauley-Stein plays over 20 minutes he could be on triple-double watch once again.

2 years- Remain on coach Andy Kennedy’s contract with Ole Miss. Kennedy received a four-year extension after landing Marshall Henderson and somehow winning the SEC tournament. Kennedy is 180-104 with the Rebels but just 67-65 in conference play. That’s not too shabby for the historically bottom of the SEC Ole Miss. Can he survive a losing record in the SEC this year? I guess we will find out. Leading the Rebels to just their second SEC tournament win ever has to count for something, right?

1-point loss to Southern Charleston: That’s how the Rebels started off the season in Oxford. The directional city school took Ole Miss to overtime and then won the game with a putback jam in the final seconds. The Buccaneers are now 6-6 and ranked 224th in the KenPom ratings. If they can’t handle that team at home then what kind of prayer do they have tomorrow night in Lexington? Cats should lob their way to 1-0 in conference with relative ease.