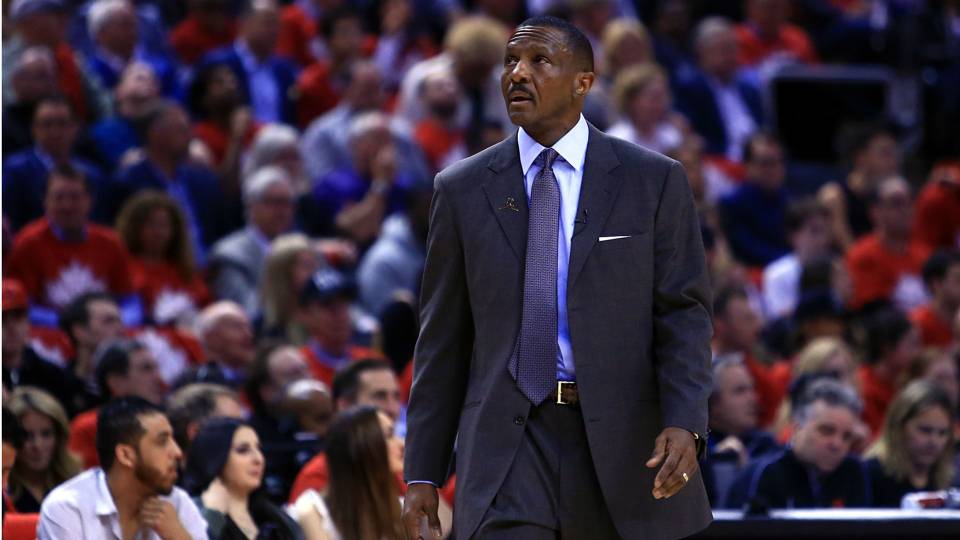 Back in 1975, Dwane Casey became just the fifth African-American to every play at Kentucky. Just two seasons later in 1978, Casey helped lead the Wildcats to a National Championship.

After going undrafted in 1979, the former Wildcat became an assistant coach under Joe B. Hall for a season before going to Western Kentucky for five years. In 1985, Casey came back to Kentucky as an assistant and head recruiter under Eddie Sutton.

And then the Chris Mills scandal happened in 1988, leading to the basketball program being placed on probation.

Casey was placed on NCAA probation for five seasons, he resigned at Kentucky, and he left the states completely until 1994 to stay out of the local spotlight.

The NCAA later rescinded their ban, saying Casey wasn’t involved in the money package that was “accidentally” opened by Emery Worldwide freight services intended for Chris Mills’ father. Still, though, college basketball programs kept away, as the only program to ever even sniff Casey was Western Kentucky.

Sports Illustrated’s Lee Jenkins broke down the largest scandal in Kentucky basketball history, and how difficult it was for Casey to recover.

He was interviewing for his first head-coaching position in 1989, with the University of New Orleans, when employees at Emery Worldwide freight services in Los Angeles claimed they discovered $1,000 in a package addressed from Casey to Claud Mills, Chris’s father. After the ensuing investigation, the NCAA placed Kentucky on three years’ probation and handed Casey a five-year show-cause penalty, essentially banning him from college basketball. Kentucky offered him a job in minority affairs, but he still wanted to coach, and there weren’t many places he could do it.

Casey sued Emery for $6.9 million, and after he settled the defamation case in 1990 the NCAA lifted his ban. It turned out Casey had been on the road when the package was sent—recruiting—and the only evidence found in the envelope was a videocassette of a high-school game Mills played. Casey ironed out his record, but not his reputation. “Nobody remembers the settlement and the proof,” he laments. “The perception is set.” When Western Kentucky interviewed him later for a head-coaching vacancy, the school president assured him that the UK case was old news.  Then he sat in front of the committee. First question: “What happened at Kentucky?”

After spending five years coaching in Japan, the Seattle SuperSonics gave him a chance as an assistant coach in the NBA, where he helped lead the team to four division titles over ten years with the team.

The NBA didn’t care. Every July, Casey returned from Japan and coached a mishmash unit in the L.A. summer league, headlined by the Clippers’ Gary Grant and Olden Polynice. He loved it. He didn’t have to recruit. “Dwane had an NBA personality,” recalls George Karl. “Humble with an aggressive mind.” On the summer day in 1994 when Karl interviewed Casey at agent Bret Adams’s office in Columbus, Ohio, the SuperSonics coach wore a T-shirt and shorts; Casey wore a meticulously pressed suit. Karl and Adams were friendly with Sutton, who had resigned from Kentucky at the same time as Casey but rebounded much faster, as head man at Oklahoma State. Sutton lobbied for Casey. Karl had already hired Tim Grgurich, an assistant under Jerry Tarkanian at UNLV, to his Sonics staff. Now he was throwing another life raft to another college castaway. “I have a real nervousness,” Karl says, “about the NCAA stopping good coaches from being good coaches.”

After proving to be one of the top young assistants in the NBA, he finally got his first head coaching gig with the Minnesota Timberwolves.

It was a short tenure, getting fired after just a season and a half, but it kickstarted a long and impressive run as a head coach in the league.

After a brief stint on the Mavericks coaching staff, the Toronto Raptors hired Casey in 2011, where he has remained ever since. He brought the team out of a rebuild and into contention in the Eastern Conference. As of now, the Raptors are the No. 1 seed in the East, and will likely remain that way going into the Playoffs. He has groomed two of the NBA’s best guards, DeMar DeRozen and Kyle Lowry, and the team has only lost one game since the All-Star break and two games since the month of February began. The Raptors are the hottest team in basketball, and Casey has been given heavy praise as a result.

In fact, Casey was named coach of  Team LeBron in the All-Star Game back in February, where he gave LeBron James’ 13-year-old-son a recruiting pitch for Kentucky.

“I’ll probably get in trouble for that,” he said, and James howled.

As an African-American head coach in the NBA, he hopes he can set a lasting impact on similar up-and-coming black coaches in both college and the NBA, regardless of the adversities that may come.

It is a job, befriending African-American players and signing them. Some assistants are gone most of the week recruiting and back on game days, exposed to amateur basketball’s underworld, the risks and temptations. All four assistants currently facing federal charges in the FBI’s college hoops probe are African-American. The more common punishment, however, is a pigeonhole.

It takes an iron man to dig out.

“I hope I can stand up and be an example that helps change the narrative,” Casey says. “ ‘He understands the game from a technical standpoint. He can teach the game. He can change an offense. He can put in a zone. He can do more than recruit.’”

The article also dives into Casey’s recruiting designation of top African-American recruits such as Shawn Kemp, his strong roots developed in Kentucky, and the lasting respect he has earned as a head coach in the NBA.

The piece by Lee Jenkins is fascinating and incredibly well-done. Take a look here.