As our fearless leader Matt Jones has said, the two most important days in your career are your first day on the job and your last day on the job. So often in life your last impression ends up being your lasting impression and that fact is especially is true in the world of sports. When you think of Anthony Davis the image of a lob-slamming, shot-blocking superstar comes to mind but that wasn’t what we had in early 2011. Cal’s centers have a pretty solid track record of taking adjusting from high school stud to playing a role in the offense. Need proof? Just look at these stats from two number one picks: 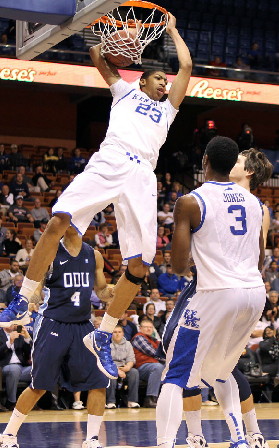 It can be easy to forget that the best player to ever play at this school had to go through some freshman growing pains but it is true. Way back in the early goings of the 2011-12 season the team relied on the returning Doron Lamb and Terrence Jones to shoulder the load. The result was some pretty pedestrian numbers from UK’s future superstar. It wasn’t until late December that AD made the leap. He came 4 blocks away from a triple double against Louisville and would put up stellar numbers for the remainder of the season.

As Gary Parrish mentioned in his article on Friday, Karl Towns took some time to get going as well and UK fans were quick to overreact. Just check out these tweets from UK’s trip to South Carolina in late January:

@KySportsRadio his stock has to b dropping. I don’t see how he could even been a top 5 pick

@KySportsRadio he’s not a top ten pick by no means. Needs to improve a lot.

@KySportsRadio worst “top 3 NBA draft pick” I have ever seen. What does he do well?

@KySportsRadio He is soft. Had it to easy on high school.

Lesson learned: give these kids some time to adjust before you make grand pronouncements about their future. Towns would  break out in February and go on to have an incredible season. One number one pick later and he’s one of the most beloved Cats of all time. In Skal’s other 5 games this season he’s averaging 16 points, 5 rebounds, and 2.5 blocks. That’s higher a offensive output through the first eight games than either Anthony Davis or Karl-Anthony Towns.

Skal may take longer to adjust to the college game because he hasn’t played a full season of basketball in over a year. Last year his prep school had a schedule of just 15 games and that wasn’t against what I would describe as elite competition. The bottom line is that a 19 year kid is going to require patience in order to learn the timing and physicality to be a good rebounder and shot-blocker. And that time it takes to develop places Skal in some pretty elite company.