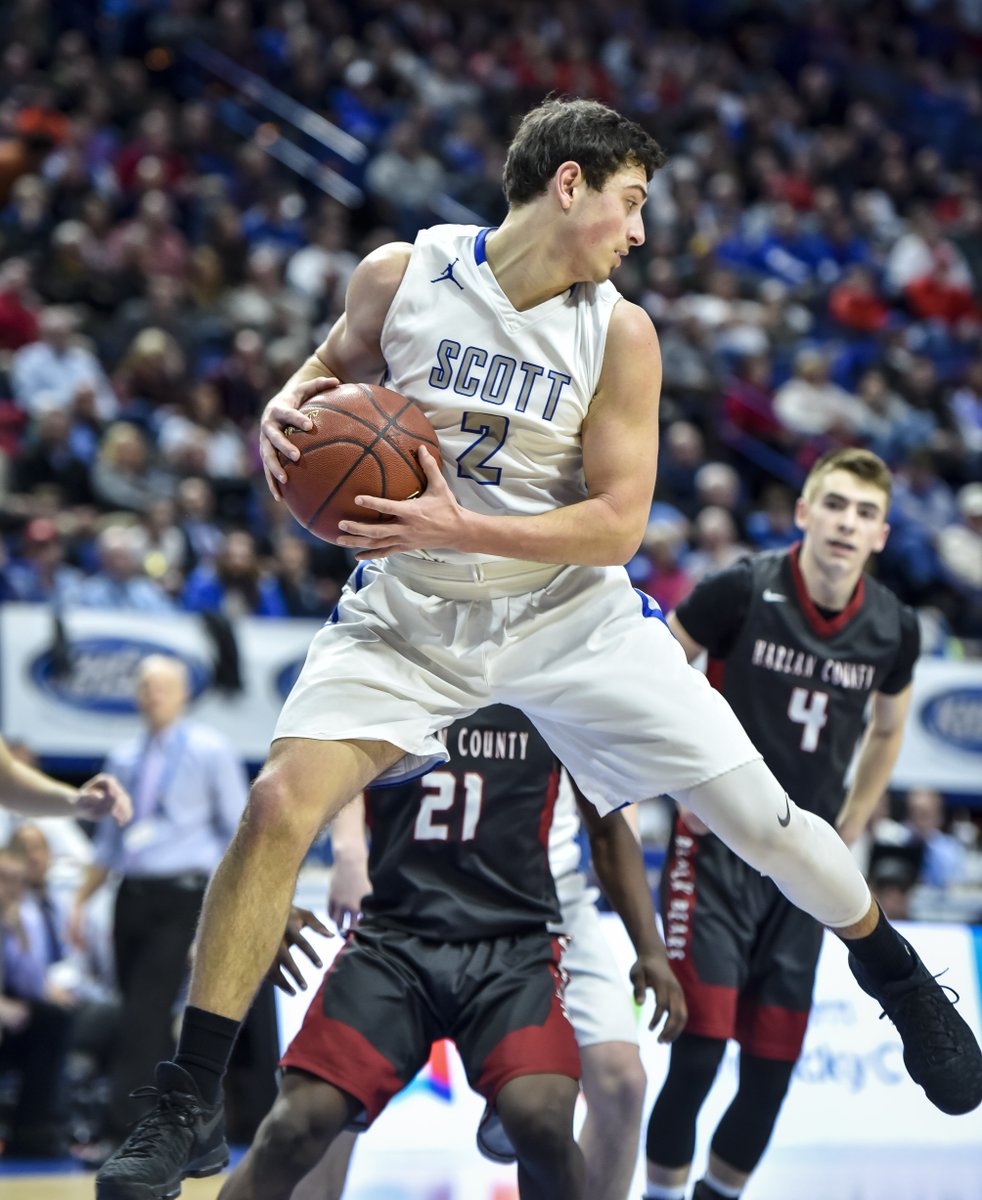 Not to be confused with Scott County, the Scott High School Eagles (22-12) jumped out on Harlan County (31-4) and never looked back as it shot 54% in the first half. Harlan County offensively struggled in the first two quarters by making only 23.1% of their shots. The team’s leading scorer Cameron Carmical could never get untracked as he uncharacteristically made just 3-8 shots from the field and missed both his free throw attempts. The Black Bears’ dismal first half shooting performance carried over to the free throw line as it was just 1-6. Scott’s shooting was much more accurate. The Eagles shot 41% (5-12) from 3-point land and 50% field goals.

Ty Simmons, also a standout on the football field, led Harlan County with 10 first half points and 7 rebounds. His team won the boards by a 21-15 count. Scott was paced in the first half by standout Jake Ohmer’s 18 points which included 3-6 from beyond the 3-point line. Ohmer’s 18 was a mere precursor to one of the most impressive Sweet 16 scoring performances in recent memory. Reserve guard Vincent Dumlao provided a spark off the bench by scoring nine, 1st half points.

Harlan County clawed back into the game in the 3rd quarter as it out-scored Scott 24-19. However, Jake Ohmer was again just too much as he totaled 35 points and 13 rebounds in just 24 minutes.

Both teams scored 22 points in the 4th quarter. Jake Ohmer’s 41 points-17 rebounds closed out Bears with a 77-65 win. Ohmer was more concerned about his team’s win than individual accolades that accompany 41 points and 17 rebounds, “Feels good, I’m more glad how team played together and got the win.” Harlan County’s Cameron Carmical finished with 25 points, but that came off an 8-30 shooting performance.

The Eagles understood that Carmical would take the bulk of the Black Bears’ shots and turned their attention to Ty Simmons. Jake Ohmer: “Carmical was going to get his, 21 (Ty Simmons) was the guy we had to shut down on the glass.” Simmons finished the game 7-7 from the field but was not targeted in the 2nd half. His last basket came with 6:22 remaining in the 3rd quarter. He later fouled out.

Harlan County head coach Michael Jones was unsure what led to his team’s shooting woes as the Bears finished the game at just 37.9% and 5 assist on the game. “Scott played really well, got a good ball club. I can’t pinpoint why we chose to shoot our worst in Rupp Arena. If we could just have made some of those shots early it would have been a different ball game. No explanation (Poor shooting).”

Scott advances to play Perry County Central on Friday. The Eagles impressed the large crowd with its shooting prowess and disciplined style of basketball.