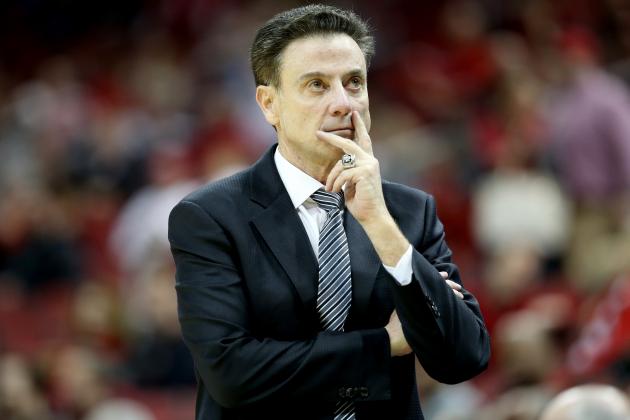 Rick Pitino has a difficult decision to make.

This year’s Louisville basketball team struggles to score, especially in the half-court.  They average 78.5 points per game, not a bad number, but they don’t have the explosive scorers we’re accustomed to seeing at UofL like Russ Smith, Peyton Siva or even Chris Jones.

They don’t have a plethora of great shooters, but they do have plenty of athletic posts that can run the floor.  Pitino’s proved in the past he can win by running the floor, but running the floor against Kentucky might be a death wish.  UCLA decided to run with Kentucky, but had to score nearly 100 points to win.  North Carolina did score 100 while running the floor but still lost.

1. Slow the pace, make it a half-court game and hope you can generate enough offense.
2. Try to outscore Kentucky by running the floor.

Between the two options, pursuing the latter seems suicidal.  UK averages more than 95 points a game, but, Rick Pitino likes to live on the edge.  “We’re not going to slow it down,” Pitino said on tonight’s call-in show.

Is Pitino bluffing or just stupid (or both)?