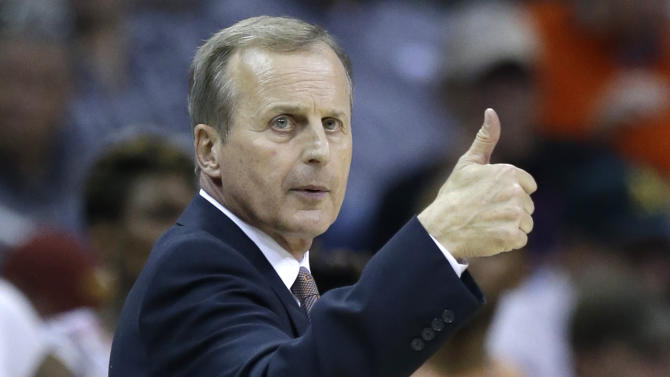 John Calipari and Rick Barnes are pals, and not just like fake coaching pals, but real pals. Today, Calipari paid Barnes one of the highest compliments on the SEC Coaches Teleconference, telling reporters that although he usually only has “great relationships” with people he works with or used to work with, he feels that same kind of kinship with Barnes.

“Most of the great relationships I have are with people that work with me or I work with because there’s a loyalty there. Rick and I have that even though we’ve never been on the same staff. If he ever called me for anything, he knows I would be there and it wouldn’t matter what he asked me, I would say, ‘Yes, I’m there.’ And he knows that and I feel the same way about him,” Cal said.

Barnes returned the sentiment, and had plenty of nice things to say about Calipari and the Cats today. Here are a few of his his nicest compliments:

When asked about the SEC/Big 12 Challenge, Barnes said Kentucky’s performance against Kansas proves it deserves to be in the conversation for the National Championship.

“I think it was an opportunity for our league to show that we are right there. Kentucky going into Kansas and playing the way they did with a chance to win it tells you that Kentucky is right there with anybody when you start talking about national championships and a team getting to the NCAA Tournament. I think they would have to be put in that position.”

Calipari still tweaking the rotation, but Barnes said he’s confident that by March, Kentucky will be one of those teams no one wants in their bracket:

“But the fact is, when I look at Kentucky right now, I think he’s getting more settled with what he wants to do with the rotation, how many guys he wants to play, and honestly that can change from game to game at times, but I just think this team is starting to kind of get an identity, and his teams have always end up doing that. And I think that coming down the stretch, they will be one of the teams people will really want to watch and a team that nobody’s going to want to deal with as the year keeps going.”

On people who say Calipari isn’t a great X’s and O’s coach: “That is jealousy”

Not even a Hall of Fame ring will silence some of Calipari’s critics, who continue to claim he’s not a good X’s and O’s coach. When asked about that today, Barnes chalked it up to jealousy.

“I think he is a great basketball coach. I think he is great. (People who think otherwise), that is jealousy. People who try to say that he is not a good coach border on ignorant. I mean, John Calipari has won everywhere he has been, and he hasn’t always had the best players. I do not think people know what it is like to have a group of great players to coach. It is one of the hardest things I learned in this business.”

“For anyone to not think he is a great coach… he is one of the greatest. If you look at what he has done and how he has done it… he is not afraid to speak the truth, and because of that some people don’t like him. He isn’t afraid to take people on, either. He is very loyal. I know how he is with the media. If he feels as if you are unfair with him, he is going to let you know, which he should. A lot of coaches won’t do that. I think he is as real of a coach as there is in this game. I know him on a personal level through a friend we met years and years ago and I know him on a different level, too, how kind and generous he is about things. If anyone ever says John Calipari isn’t a Hall of Fame coach, then they are speaking from jealousy or idiocy. You cannot deny it.”

Barnes is hoping to bring Tennessee back to national relevance. His model? Two-and-a-half hours north:

“But I’ll say what I think, and Kentucky being a two and a half hour car drive from here, it should be a big rivalry, it should be. But the fact of the matter is, I want our program to get where we’re like their program in the fact that everywhere we go I want people to get really excited. So we don’t have to look far to see what we should be striving to be.”

Kentucky is the gold standard, after all.