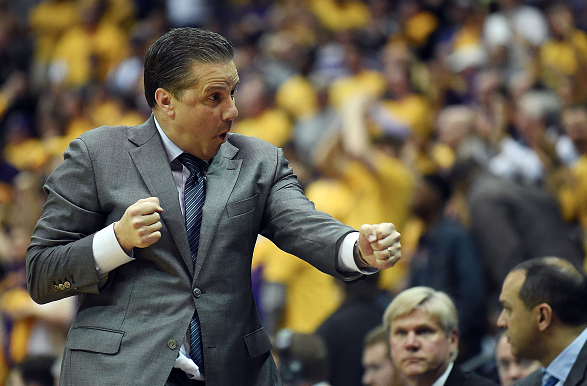 Johnny Jones’ 2017 basketball team is not very good.  They’ve only won one game since Christmas, losing by an average of 17.1 points.  They surrender 81.2 points per game, which puts them in the bottom 25 in the country.

This year is bad, but it hasn’t always been that way in Baton Rouge.

Kentucky beat LSU not once, not twice, but three times.  The Cats won by two on the road, 11 at home and by three at home in the SEC Tournament.  Still, the Cats couldn’t get away from the Tigers, forced to play them in the 1986 Regional Final.  They say it’s tough to beat a team three times.  Kentucky did that, but couldn’t do it four times.

Trailing by 31 points in the second half, Kentucky’s improbable comeback in 1994 is one of the highlights from Rick Pitino’s time at Kentucky.

An Untouchable First Half

Kentucky’s first half against LSU in 1996 is one of the most remarkable halves of basketball ever played.  Kentucky pressed, dunked, drained threes and dunked some more for 86 first half points.

A team many thought could go 40-0 was just 20-6.  LSU came to town just a week removed from a ten-point home loss to Florida.  The team struggled to finish down the stretch, making this overtime victory an important one.  We thought it was the season’s turning point, but they needed a butt-whooping a week later at South Carolina to wake up in time for the NCAA Tournament.

The undefeated Wildcats struggled on the road.  The game pivoted on a technical from Karl Towns, assessed after a dunk where he lingered on the rim.  Calipari loved it, but Towns responded to adversity, finishing with 12 points, 13 rebounds and 2 blocks, including the go-ahead bucket with 1:30 to play.

4 Comments for Remember when LSU was Good at Basketball?