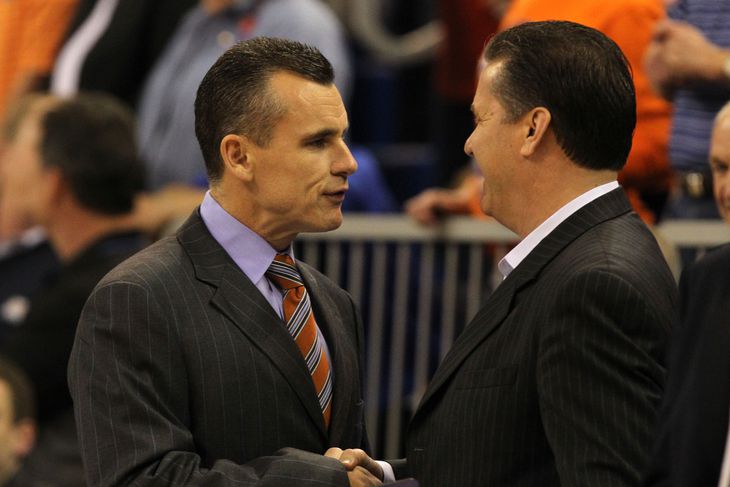 According to Ian O’Connor of ESPN.com, one of the reasons Billy Donovan accepted the Oklahoma City Thunder job is because he is tired of recruiting against John Calipari in the SEC.

“Billy Donovan told a friend he consulted with this week that a losing SEC recruiting struggle with Kentucky was wearing on him,” O’Connor reports.

Donovan’s new deal, far away from Cal’s dominance, is for five years. He released this statement today:

“I am honored and humbled to be named the head coach of the Oklahoma City Thunder. I knew that it would take a unique opportunity to leave the University of Florida and that is clearly how I look at this situation,” said Billy Donovan, Thunder Head Coach. “The Thunder represents so many of the values that I embrace as a head coach; the commitment to the team above oneself, the dedicated pursuit of excellence, the commitment to organizational culture, the identity they have established and the fact that the Thunder and the community are so intricately woven into the fabric of one another. To have the ability to work with such a talented and high character group of players is also rare, and I am excited to forge ahead creating those relationships. It is of course bittersweet as the University of Florida will always hold a very special place in my heart and in my family’s. I’ve had the good fortune of working with the best athletic director in the country in Jeremy Foley over the last 19 years, and I’ll be forever grateful and thankful for the opportunity and his friendship. Countless players, students, and other people in the administration were responsible for our success and for the meaningful connection we had with the Gainesville community. I have a deep appreciation for what the University of Florida will always mean to me and I’ll forever be a Gator.”

17 Comments for Recruiting against Kentucky was wearing Billy Donovan down