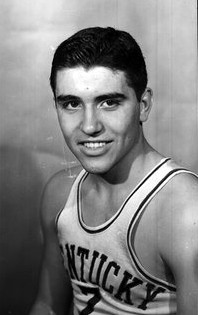 Grisby, a Floyd County native and former Floyd County Superintendent and coach, was also a three-year letterman in baseball at UK. Under his 13-year tutelage, the McDowell High School basketball team was 330-131, and he reportedly still called basketball games for WPRG in Harold, Kentucky. He’s survived by his three children Melinda Gay Majakey, Geri Eileen Grigsby, and Pete Grigsby III.

5 Comments for Pete Grigsby Jr., member of the 1953-54 undefeated team, passes away