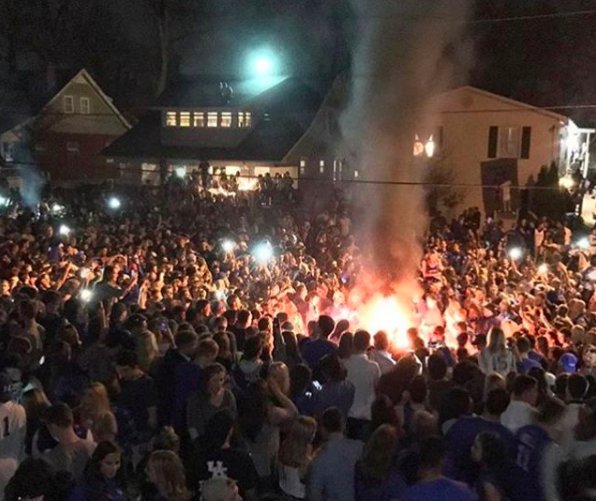 Sorry students, you’ve had your time.  Over the last two weeks we’ve seen the two best celebrations ever brought to Kentucky fans, thanks to a few proud, joyful parents.  Last week, Bam’s mother stole the show in Indy.

Last night, it was De’Aaron Fox’s mother Lorraine’s turns.  All week we heard about the great Lonzo Ball, but last night Fox put the glove on Ball.

“Fox put the glove on Ball” needs to be the title of Kentucky Joe’s next hit.

The students, they had their fun, but it was very average.  In fact, it was much worse than normal.  Somehow there’s a negative correlation between fires and arrests; fewer fires mean more arrests.  There were only three fiery couches, but there were four arrests.

This was the only thing chanted outside of “C-A-T-S CATS CATS CATS!”

I hate to see the students disappoint, but you can’t keep ’em down for long.  No matter what happens, we’ll still get to see them drunk on the local news.