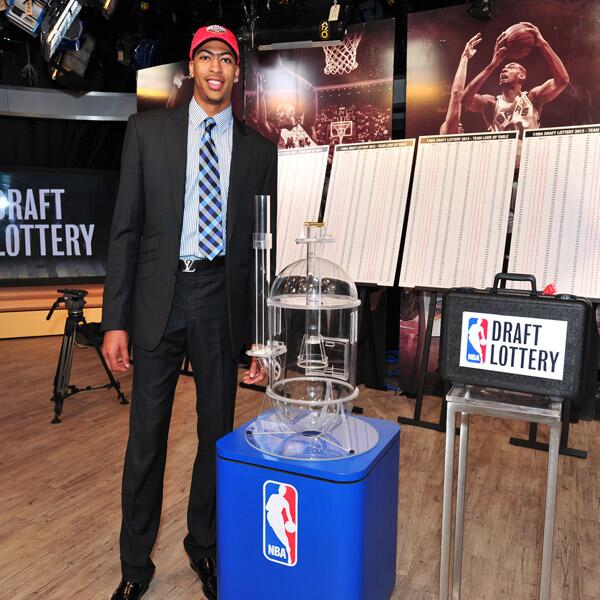 Before Indiana and Miami tip it off in Game 2 of the Eastern Conference Finals this evening, the NBA will hold its Draft Lottery to determine the selection order of next month’s draft. It will be broadcast live on ESPN at 8:00 p.m. ET.

The odds for winning the top overall pick are as follows:

Each team sends a representative to the lottery every year in hopes of using them as a good luck charm to reel in a top pick. Below you’ll find the 2014 franchise representative and who KSR would send instead:

Who They Should Send: ANYONE BUT MALLORY EDENS

The 18-year-old daughter of Bucks owner Wes Edens will be on stage for tonight’s NBA Draft Lottery. Alexander Lasry, the son of new Bucks co-owner Marc Lasry, will be backstage.

Mallory is a terrible choice because Twitter won’t be able to handle an 18-year-old girl on national TV at the lottery. I already feel bad for her. She better set her social media settings to private before it’s too late.

Who They Should Send: JULIUS ERVING

Dr. J will be in the building for Philadelphia tonight. The only other option I can think of would be the Allen Iverson CelebriDuck, but Matt and I stole all of those from the arena at a Villanova game last season.

Who They Should Send: LIL’ PENNY

Pat Williams, the co-founder of the Magic franchise, will represent the team in the 2014 lottery. If I were making the decision, Lil’ Penny would be sitting on top of Orlando’s podium. He comes from a time when the Magic were good. And relevant.

Who They Should Send: THE UNDERKANTER

The Jazz will send the son of owner Gail Miller. Bad form, it’s been done before.

Send The Underkanter out with a 10-bell salute right before Adam Silver opens the final envelopes. Chokeslam if the commissioner gives the pick to anyone but the Jazz.

Who They Should Send: RED AUERBACH

Who They Should Send: KOBE BRYANT

I don’t hate James Worthy representing the Lake Show but Kobe Bryant needs to be the man wearing purple and gold on stage tonight. Then again, Kobe recently said he would rather eat paint chips than watch his team last season, so he may not care enough to show up.

Who They Should Send: DEMARCUS COUSINS (w/ GOTTI)

Anjali Ranadive, an aspiring musician and daughter of the Kings owner, will represent Sac Town tonight. I see this as a poor cry for publicity to spark her music career.

Send Boogie and my favorite pup Gotti to get things done.

Who They Should Send: STAN VAN GUNDY

Van Gundy was hired as the new head coach and president of basketball operations last week. Let him get off to the right track by bringing some new luck to the lottery.

(And because he has a mustache.)

Who They Should Send: NICK GILBERT

Nick Gilbert’s run as the Cavs good luck charm ends this year as Cleveland will send GM David Griffin. The only way this is excusable is if Nick Gilbert is out recruiting LeBron James to come home.

Who They Should Send: ANTHONY DAVIS

New Orleans will be giving up its first round pick to Philadelphia unless the franchise can somehow land a top five pick. Send Anthony Davis because he’s a winner, or send no one because it doesn’t really matter.

Who They Should Send: SOMEONE WHO IS REALLY HIGH

Leave head coach Brian Shaw at home and send one of the city’s best stoners. Maybe, just maybe, that person will get high enough to control the outcome of the lottery with their mind.

If not, it’ll make for a good interview on ESPN.

Who They Should Send: AN OLD SHOE

The Knicks’ pick goes to the Magic. Who cares.

Who They Should Send: KEVIN GARNETT

Minnesota GM Milt Newton will represent the Wolves at the lottery (Zzzzzzzzzzzz) but the play should be to borrow KG from Brooklyn for the night. He leads the franchise in minutes, points, rebounds, assists, steals and blocks. “Anything is possible!”

Who They’re Sending: THE MORRIS TWINS

Who They Should Send: CHARLES BARKLEY

Because everything needs more Charles Barkley.