Shoutout to this lovely couple for repping the Cats all the way in Machu Picchu. What a gorgeous picture, and, I imagine, one heck of a hike. After three straight days of rain down here in Nashville, I’ve pretty much forgotten what it’s like to go outside.

Yet, the sun’s making its triumphant return today, which makes Monday slightly less annoying. Let’s roll through today’s agenda, shall we?

Just when I thought Sunday couldn’t get any slower, news broke around 7 p.m. that freshman Hamidou Diallo will declare for the NBA Draft but NOT sign with an agent so he can get feedback and “keep all doors open.” The news may come as a shock to some since Diallo only enrolled in January, but keep in mind that since the rules changed last year, it makes sense for him to go through the evaluation process and receive feedback because there’s no risk. He and Bam will have until May 24 to decide whether or not to stay in the draft or come back. Diallo explained his decision in this statement from UK:

“Playing in the NBA has always been the ultimate goal for me,” Diallo said. “It’s part of what makes Kentucky so special is that it prepares you for the next level better than anywhere else. When I decided to enroll in school in January, my plan was to come to Kentucky to work on my game and to focus on school. At the end of the season, I knew I wanted to see where I was in the draft process and go through that so I could get a proper evaluation.

“That plan hasn’t changed and that’s why I am declaring for the NBA Draft. I do not plan on hiring an agent at this time. I want to see where my game is and explore my options. I just want to keep all doors open, and I want to thank Coach Cal, the coaching staff and my teammates for allowing me to pursue my dreams. My game has grown so much in the four months I’ve been at UK.

“I don’t know what the next few weeks are going to have in store for me, but I do know I’m going to work as hard as I ever have and keep an open mind. At the end of the day, this is a learning process for me and I appreciate the Big Blue Nation for being both understanding and supportive of my decision. I can’t thank you enough for making me a part of the family from day one.”

If you’re still bothered by the timing, remember that midnight last night was the deadline to put your name in the draft.

What would you expect from the coach who wanted his entire team to declare for the draft last year once the rules changed to make the process more flexible? Here’s Cal’s statement in full:

“With the information that will be available to Hami and the feedback he will receive by going through this process, I fully support his decision,” head coach John Calipari said. “It’s in Hami’s best interests to evaluate if now is his time or if he would be better served returning to school. Whatever Hami ultimately chooses to do, you’re talking about an athletic guard with great ball skills, an unbelievable finisher and a terrific defender. He’s gotten so much better in his four months with us and he’s only going to continue to get better.”

Another round of “will he stay or will he go” may frustrate fans, but honestly, if you’re an elite college player, you’d be stupid not to take advantage of the chance to get feedback from the next level to make an informed decision. If Diallo does decide to stay in the draft, does it hurt Kentucky next year? Roster-wise, yes. From everything we’ve heard, he’s an elite player with tremendous upside and could be one of the cornerstones of next year’s squad. But, by now, you should know that Calipari will never hold a kid back, and if you don’t understand the reasons why, I suggest you go watch his “30 for 30” again, particularly the part about Dajuan Wagner.

It’s been 19 days since Bam Adebayo declared for the draft and still no word on whether or not he plans to sign with an agent or return to school for his sophomore year. There were rumblings last week that Bam may be leaning towards staying for another year, and this past weekend, he went home to North Carolina to visit with his family, during which there were probably some talks about his future.

With one month until the withdrawal deadline, Bam and Diallo will get to go through workouts with teams leading up to the all-important NBA Draft Combine May 9-14 in Chicago. I wouldn’t expect any decisions before then.

4. Jemarl Baker is on campus

Lost in the shuffle of Diallo’s decision was new UK commit Jemarl Baker’s arrival on campus. Baker committed to UK a few weeks back, and, according to Ben Roberts, is only now taking his official visit. Welcome to campus, Jemarl. Enjoy yourself.

5. John Calipari sent out one of the swaggiest pictures ever

Virginia to Dallas. Change of scenery, change of shoes! Black or white?@Drake, you're big, my friend! #CalipariPack pic.twitter.com/lIfRE96gtp

It was only a matter of time before Calipari found a way to mention the Air Jordan 8 “Calipari pack” Drake made in his honor, and sure enough, it came on the first weekend of the live recruiting period. In a tweet only Calipari could pull off, he posed with both pairs of shoes and asked fans which he should wear to the adidas Uprising in Dallas. As you would expect, that tweet got a lot of attention from its target audience online, with all of the UK 2017 commits and several of Cal’s current and former players sharing it as proof that their coach is a boss. Or, as many of them put it, the greatest of all time.

If you’re curious, he went with the white version: 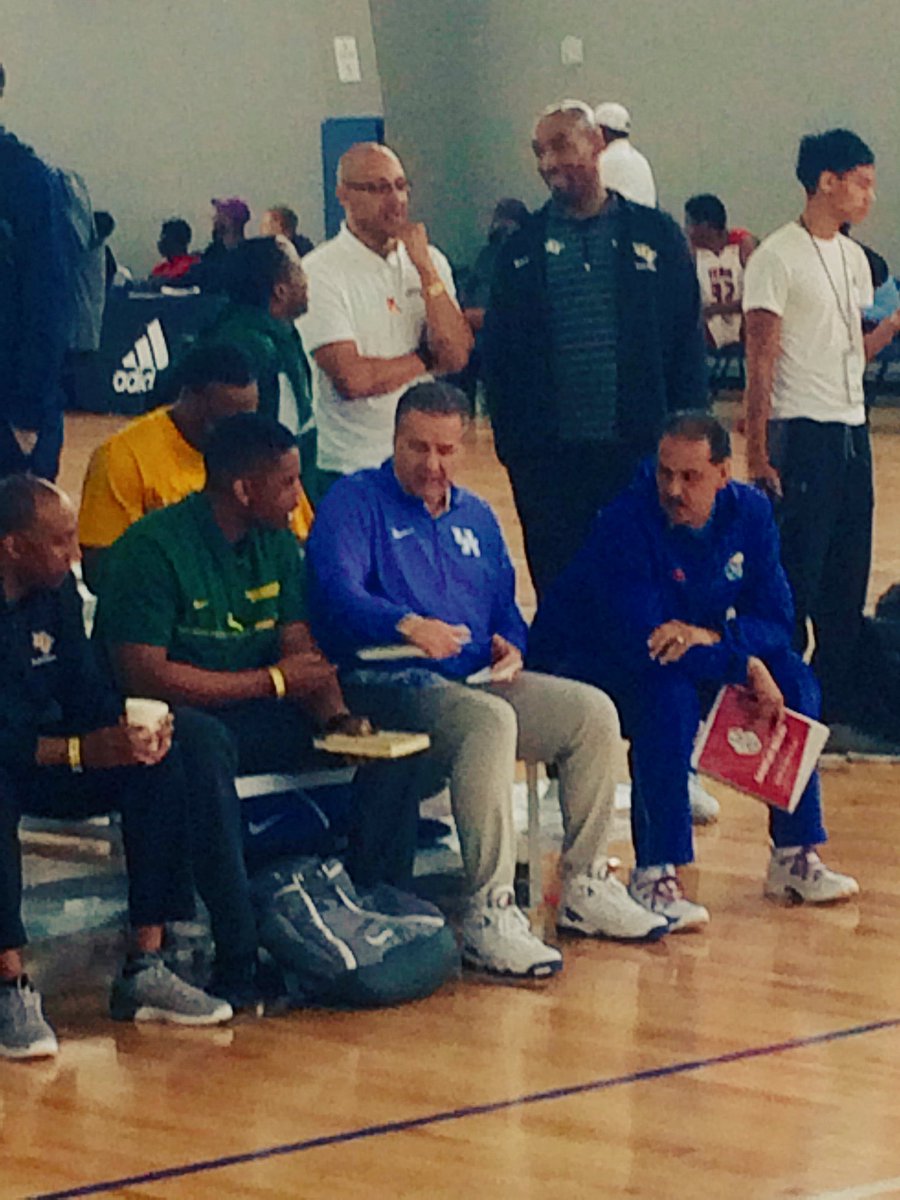 6. Here’s who Calipari and staff watched this weekend

As mentioned, it was the first weekend of the live period, and Calipari and staff crisscrossed the country to check in on their 2018 prospects. Here’s a rundown of who they saw where. Recruits with an offer from the Cats have an asterisk, those that don’t don’t.

Calipari and staff will be on the road against next weekend watching recruits at Nike and Under Armour events in Indianapolis and the adidas circuit in Atlanta. As for what’s going on with Kentucky’s remaining targets for next season (Mohamed Bamba, Kevin Knox, Cam Johnson, and Mark Smith), no new developments over the weekend.

You know it’s a busy day when we’re just getting to the fact that the CATSPYs, UK Athletics’ annual banquet, are tonight at Memorial Coliseum. The 15th annual awards show starts at 7 p.m. and will be open to the public this year, with tickets available for $5 online. Doors open at 6:30 p.m. De’Aaron Fox, Malik Monk, and Benny Snell are all up for Male Rookie of the Year, while Dominique Hawkins seems to be a shoo-in for the Supporting Role Award.

If you can’t make it to the show, you can watch a live stream on UKAthletics.com, or, of course, check this website for complete coverage.

8. UK Baseball wrapped up a big week with a win over LSU

What a week for UK Baseball. The #10 Bat Cats beat #8 LSU 10-2 yesterday to win the series, and earlier in the week, knocked off #2 Louisville. The Cats are now 28-13, 12-6 SEC, and have won six of the last eight games. They currently hold a two-game lead over Florida in the SEC East with 12 conference games left. Next up: Xavier at Cliff Hagan Stadium on Wednesday at 7 p.m., followed by a three-game series with South Carolina this weekend.

Just when you thought the high school All-Star circuit was over, here came Friday night’s inaugural Allen Iverson Roundball Classic. PJ Washington took home MVP honors, scoring a game-high 37 points for Team Honor, which defeated Team Loyalty 198-152 (yes, that is a real score). Shai Alexander followed up his Derby Festival MVP performance with 21 points while Quade Green had 32. That makes 90 points combined for the future Cats in the All-Star Game, a pretty nice little weekend for the 2017 class.

10. Ever had a moment like Patrick Patterson did yesterday?

Man, I hate when that happens.