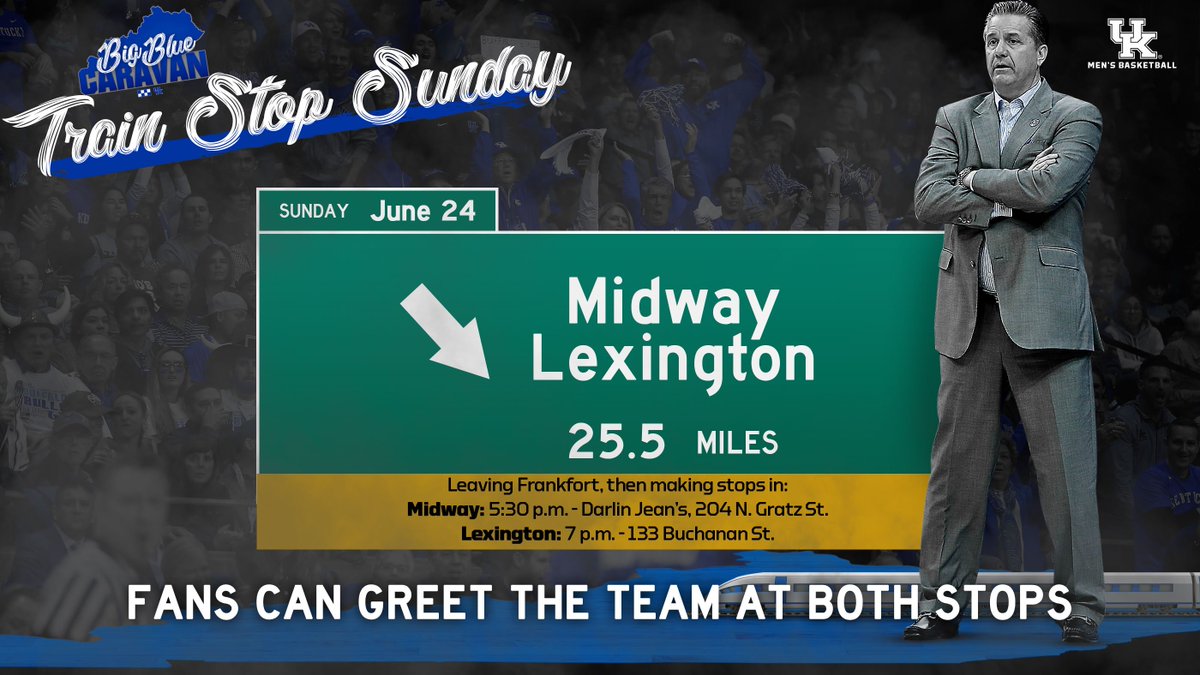 Want to meet the 2018-19 Kentucky Wildcats? John Calipari wants to give the Big Blue Nation that opportunity this weekend.

As part of UK’s Big Blue Caravan, Coach Cal and the entire basketball roster will be making train stops in Midway and Lexington on their way home from Satellite Camp in Frankfort. The stops will take place this Sunday to take photos and sign autographs with fans.

Complimentary posters will also be available to fans while supplies last.

Their first stop in Midway will be made at Darlin Jean’s (2014 N. Gratz Street) at 5:30 p.m. The second stop in Lexington will be at the Central Kentucky Line outside of Rupp Arena (133 Buchanan Street) at approximately 7:00 p.m.

#BBN, I want to invite all of our fans to meet our team on Sunday as make a couple of pit-stops on the way back from our Satellite Camp in Frankfort! https://t.co/OaLHcvybNV pic.twitter.com/Q4i9mPYwSu

We'll be out there to greet fans, sign autographs and take pictures at both spots. Complimentary posters will also be available to fans while supplies last. Hope to see everyone out there.

Coach Cal said he’s excited for fans to meet Ashton Hagans and Reid Travis now that they are officially on campus:

“These Satellite Camps have been a blast for both us and the Big Blue Nation because our fans have had the opportunity to get up close with our players,” Calipari said. “The only problem is, until now, we haven’t had our full team. With Ashton (Hagans) and Reid (Travis) here, I wanted to give our fans an opportunity on the way back from camp to meet these guys. It’s a special group that I think our fans are really going to love. I hope BBN can come out, meet our players and take a few pictures. Everyone is welcome.”

If you’re interested in the Satellite Camp, which will take place from 1 to 4 p.m. at Franklin High School, it’s not too late to register. Fans can sign up by visiting ukathletics.com/camps.

1 Comment for Meet the 2018-19 Kentucky Wildcats in Midway and Lexington on Train Stop Sunday!