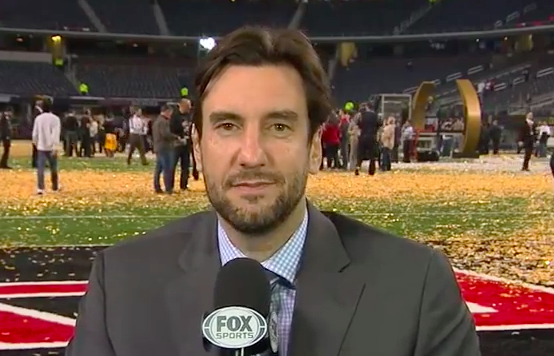 Last week, Clay Travis made headlines when he went on “Sports Talk with Bo Mattingly” and claimed John Calipari pays his players. This afternoon, Bo Mattingly asked our own Matt Jones to come on his show and respond to Clay’s comments, and Matt obliged. As you would expect, Matt ripped Clay a new one for his accusations, calling him the “Donald Trump of sports radio”:

“He says things solely, solely to get attention, and it worked,” Matt said. “He’s like, in my opinion, the Donald Trump of sports radio; just say something, throw it out there, act like people have to listen to it, then deal with it. I think it’s ridiculous.”

Matt then broke down why, as a national media member with a huge following, it was extremely irresponsible for Clay to state that Calipari pays players as a fact rather than an opinion.

“It’s one thing to say — Skip Bayless may say, ‘I don’t think LeBron is,’ whatever. That’s an opinion. [Clay] is stating a fact that’s not a fact. He’s saying, ‘Calipari paid players.’ That’s not an opinion, that’s a right or wrong answer. It’s not ‘who’s the best’ — ‘LeBron is the best’ is an opinion. He is stating false facts and I don’t understand how people let him get away with it.”

Good stuff, so check out the complete interview below: