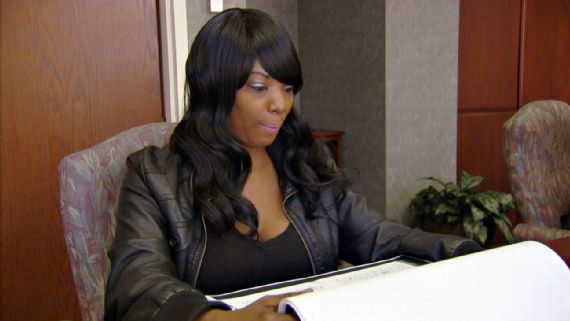 Well, today got off to quite the start, didn’t it? Last night, we got a tip that Katina Powell, co-author of “Breaking Cardinal Rules,” would be doing her media tour to promote the book, the hardcover version of which goes on sale today. ESPN aired portions of Powell’s interview with “Outside the Lines” during “SportsCenter” this morning. Here’s what you need to know:

I expect we’ll find out more during OTL today from 1:30-2:30 p.m. Powell and her attorneys will also meet with UofL’s general counsel this afternoon at 3 p.m. After lingering on the sidebar for weeks, the story has finally gone mainstream and will only get bigger in the coming days, to the point I actually feel bad for Louisville fans, something I didn’t think was possible. Quit your trolling and just go back to bed, guys.

On “Mike and Mike,” Cris Carter made a good point. While Louisville fans are clinging to the hopes that Pitino didn’t know about the scandal (which Carter believes is “impossible”), it doesn’t matter. If this had happened at Kentucky, do you think people would be letting John Calipari off the hook because he claimed he had no knowledge of it? No, they would be hammering him for it. With each story that comes out, it looks worse and worse for the Louisville basketball program, and more and more likely that Pitino will have to resign.

The OTL segment, if you missed it:

We’ll be monitoring this story all day, but there is other stuff going on. Let’s quickly go over the agenda.

Now that we’ve finally gotten the Auburn game out of our system, it’s time to turn our thoughts to all things cowbell. As Helmet Guy would say, “Messeebbe State will be tough,” but I don’t think the Bulldogs are so good that they should be an 11.5-point favorite. Today, we’ll hear from the offensive coaches and players after practice after one of their most impressive outings of the season. Odds Dawson gets asked another question about the inside draw?

The 2016 point guard visited UK this past weekend for Big Blue Madness and from what we’re hearing, had a great time. The Cats are far and away the favorite for Fox, who told Evan Daniels he wants to make a decision by November 16, the start of his senior season. We’re hearing there’s a VERY good chance Fox goes with the Cats, so stay tuned…

I booked my ticket for Chicago for the Champions Classic

With a smorgasbord of road games this season, I drew the best game out of the pot and will travel to Chicago to cover UK/Duke in the Champions Classic. It’s been far too long since I’ve been in the Windy City, so I’m pretty stoked, even if the game’s on a Tuesday night. Hopefully amidst all the work, I’ll have a chance to check out The Pony, the famous UK bar, and one of the million pizza places Kristen Geil tweets about. If it’s not 100-degrees below zero, I might even try one of her recommended running routes. Not likely, but it’s a nice thought.

In case you’re Shannon the Dude or you were under a rock last night, the new Star Wars trailer dropped, and my husband, a mega Star Wars fan, GEEKED. I’m not really a fan, but even I can admit it was cool. And yes, that was Luke Skywalker’s hand on R2D2.

KSR is live at the Sleep Outfitters in Nicholasville

Come on out to 121 Bryant Drive in Nicholasville to hear the guys talk about the ish hitting the fan in Louisville, the Mississippi State game, and whatever else tickles their fancy. Something tells me it’ll be a good one.