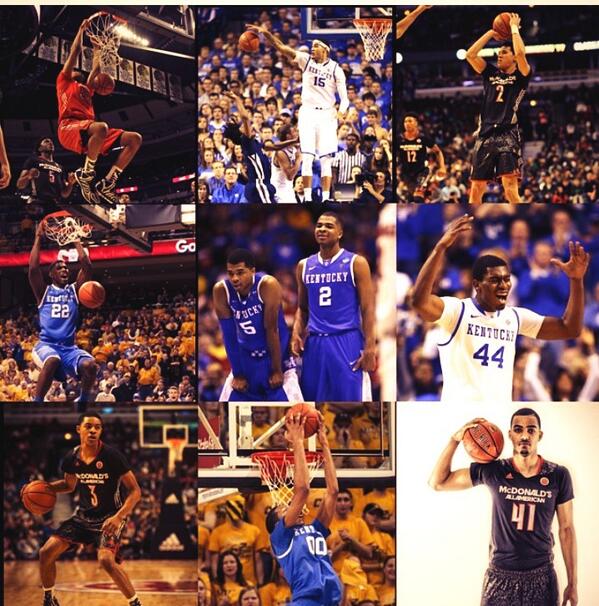 Last night’s NBA draft deadline has officially been crossed so ESPN is ready to update their final way too early rankings. Eamonn Brennan has been updating the teams following all of the different declarations so let’s take a look at where the Cats landed. Spoiler Alert: High.

1. Kentucky Wildcats: Kentucky was our No. 3 in the Way Too Early rankings back when we were almost certain the Harrison twins, Willie Cauley-Stein, Alex Poythress, and maybe even Dakari Johnson would be headed to the NBA. In the end, Kentucky kept all five, and add two of the best big men in the country (Trey Lyles, Karl Towns) in the incoming class to form a team that is surprisingly experienced, mind-bendingly tall (Calipari has three 7-footers and two 6-10 guys, all of whom are likely to play in the NBA), and every bit as loaded on natural talent as ever. Kentucky is losing Julius Randle and James Young to the draft, and will probably be better next season. Kind of insane!

Brennan makes an excellent point in this final ranking. At one point during the post-season it seemed like our starting five next season could be Ulis, Booker, Willis, Lyles, and Towns which was good enough for him to rank third. Fast forward a few weeks and now those five would-be starters are likely to come off the bench and back up the majority of last season’s national runner up. That sort of depth is more rare than a Nintendo World Championship cart which is to say, mythical.

Kentucky’s roster for next season is now set and they only thing to do is to get mentally prepared for what should be an absolute circus. The deadline has passed and it’s going to be one great time to be a Cat fan.