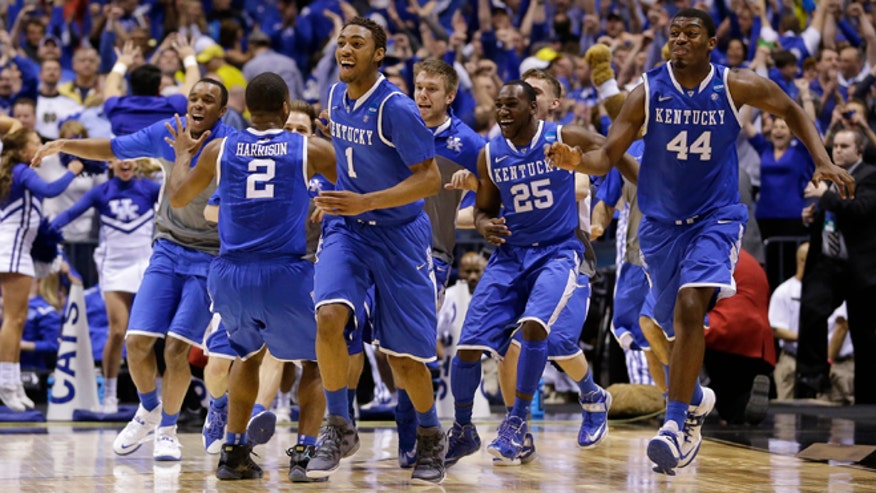 Gary Parrish, Jeff Borzello and Matt Norlander of CBSSports.com got together yesterday to sit down for a podcast discussing the state of college basketball heading into next season following a host of NBA draft decisions over the past week/weekend. The trio of basketball pundits had a lot to say, and not surprisingly– specifically a lot to say about Kentucky. In the 49 minute podcast, nearly half the conversation revolved around Kentucky. Here were a few of the highlights:

“Andrew and Aaron Harrison are going to return to Kentucky. That means that heading into the off-season, there were legitimately 8 NBA prospects that theoretically could have turned pro. … This sounds crazy but they may be more talented than they were last year when they were the pre-season #1 team that played for a national championship. And this year they’re going to have more experience. They won’t have some of the stumbling points. Is there any rational intelligent reason to say anyone else but Kentucky should be pre-season #1?”

“Now, because of the way that run went down– John Calipari will always preach that it’s about the process.”

“They can play more different ways now. They can go quicker and smaller in the back court. They can go big, small, fast, slow.”

“They’re gonna be starting maybe only 1 freshman, and not because they don’t have great freshmen. They’re really experienced, deep and immensely talented. And now Calipari has the ability to shut anyone up in December, January… He can say ‘Are you the same people who were criticizing us last year?’ He’s got a pretty heavy trump card there to play.”

“In theory, it’ll be the most minutes Cal has had to spread around. Balancing all those minutes will be the first challenge those first 6 weeks. Especially in the front court. You’re literally going to have a potential first round draft pick buried somewhere on your bench.”

“You need Poythress at the 3. That’s the biggest thing. Who will James Young’s replacement be? If they decide somewhere along the line that Alex Poythress can’t play the 3, you’ve then got him throw in with that cluster of bigs.”

(On the return of the twins) “I love it because it makes Kentucky deep, interesting and pre-season #1 again.”

“I think Duke is going to be really, really interesting. To me, Duke is going to have the best player in college basketball. And he’s a legit center. I honestly believe he has the opportunity to put up one of the 15-20 most impressive seasons since the mid-80s (on Jahlil Okafor).”

The three also talk in detail about predictions for Pre-Season All-American teams. Although Kentucky doesn’t necessarily have a singular star/dominant player, Aaron Harrison made his way into the conversation. Louisville’s Montrezl Harrell was also heavily in the discussion.