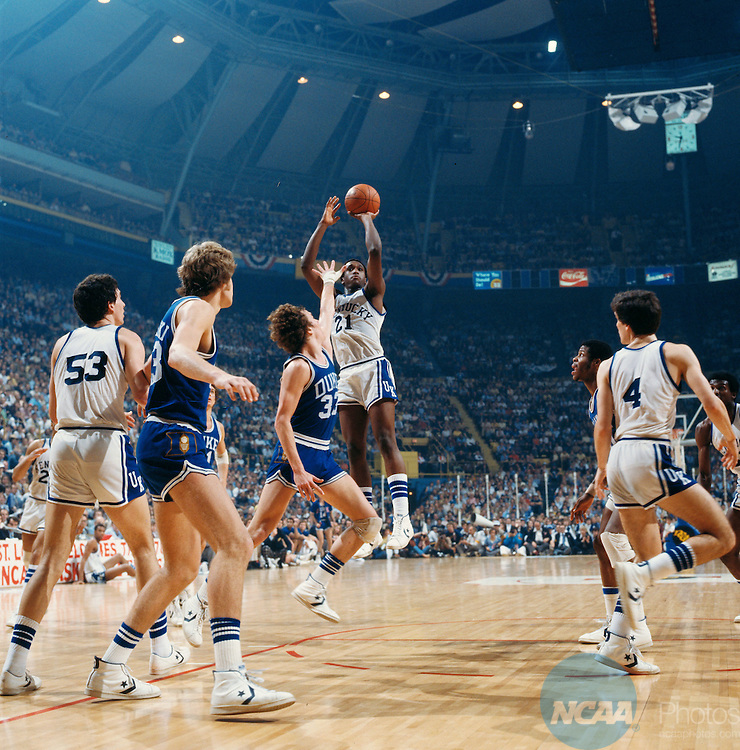 This afternoon Kentucky will play an SEC Tournament game in St. Louis for the first time, but The Gateway to the West has hosted the Wildcats in the postseason on numerous occasions.

Kentucky was won seven of their eight NCAA Tournament games in St. Louis.  The lone loss kept the Cats out of the 1999 Final Four.  Every other trip to the Midwest has created lasting memories for Kentucky fans across the Big Blue Nation.

The timing of Kentucky’s return to St. Louis is excellent.  This year marks the 40th anniversary of Kentucky’s 1978 National Championship, a 94-88 victory over Duke in the Checkerdome.  Rick Robey had an excellent 20-point, 11-rebound double-double, but Jack Givens stole the show.  The No. 3 all-time soccer in UK history made 18-of-27 shots to score 41 points on college basketball’s biggest stage.

Twenty-four years after Givens’ fantastic performance, Tubby Smith’s team traveled to St. Louis for the first two rounds of the NCAA Tournament.  Facing Tubby’s former team in the second round, Tulsa, Tayshaun Prince played the best game of his career.  The lengthy lefty knocked down 6-of-8 threes to finish with a familiar total, 41 points.

In the Sweet 16 Kentucky fell to Maryland, who would go on to win National Title.

Kentucky’s last appearance in St. Louis is one of the greatest NCAA Tournament upsets many readers have ever witnessed.  The eighth-seeded Wildcats drew undefeated Wichita State in the second round.  After an up-and-down regular season, most just hoped UK could keep it close.  They did one even better.

Ron Baker scored 20 points and Cleanthony Early was unstoppable.  The Wichita State swingman only missed five shots en route to a 31-point performance.  The only answer for Early was the Harrisons’ offense.  The Twins combined for 39 points, but Aaron had to wait another week to become a heartbreaker.

A back-and-forth affair until the final minute, James Young was the unlikely hero.  His three from the top of the key put the Cats up two with just over a minute to play.  Kentucky fans held their breath until Fred VanVleet’s game-winning three-point attempt clanked the back of the rim to end Wichita State’s undefeated season.

Kentucky will have a chance to create more amazing St. Louis memories starting today against Georgia at approximately 3:30.

4 Comments for Kentucky Basketball has an Excellent Postseason Past in St. Louis