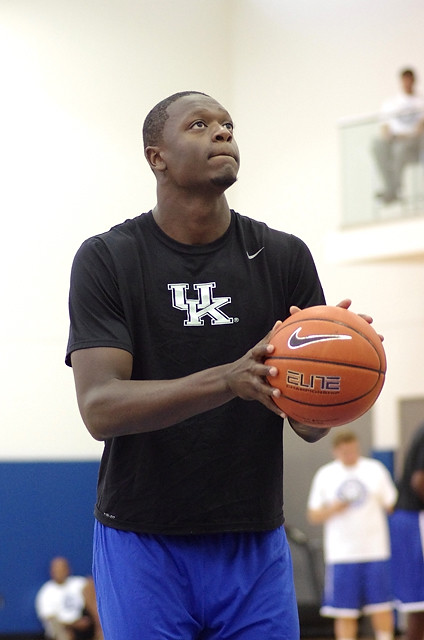 While the campers were hanging out outside Memorial Coliseum, the team was inside going through one its last practices of the week before two-a-days begin this weekend. Eric Lindsey interviewed Julius Randle, Dakari Johnson, and Jarrod Polson afterwards to get their take on how things are going. Here are a few quotes:

What they’re working on in practice: “Throwing lobs and stuff, just regular passes or dish offs or bounces passes. Him telling us to try new things, things we’re not comfortable doing, but things we’re going to have to do in the game because of how teams are going to guard us. He’s throwing a lot of different stuff at us. We’re playing fast, we’re trying to learn how to think slow while playing fast.”

On mentally and physically preparing for practice: “It’s really hard, especially when you gotta to wake up in the morning, lift weights, go to classes and tutoring and get your mind mentally prepared to come out and practice. You’ve just gotta push through and just know that he’s doing this for the best of it so that at the end of the day, we can win the National Championship.”

On competition in practice: “We’re by far the deepest team I’ve been on in my four years. We literally have two guys at every position that are going at it, sometimes three, so you can’t really take a break in practice. If you take one break, you’re gonna get exposed and the other man is coming for your spot and you’re coming for their spot. So, it’s definitely a good thing for us and we’re all competing as hard as we can and I think that’s the key to success.”

Check out the videos over at CoachCal.com.

8 Comments for Julius, Dakari, and Jarrod dish on today’s practice