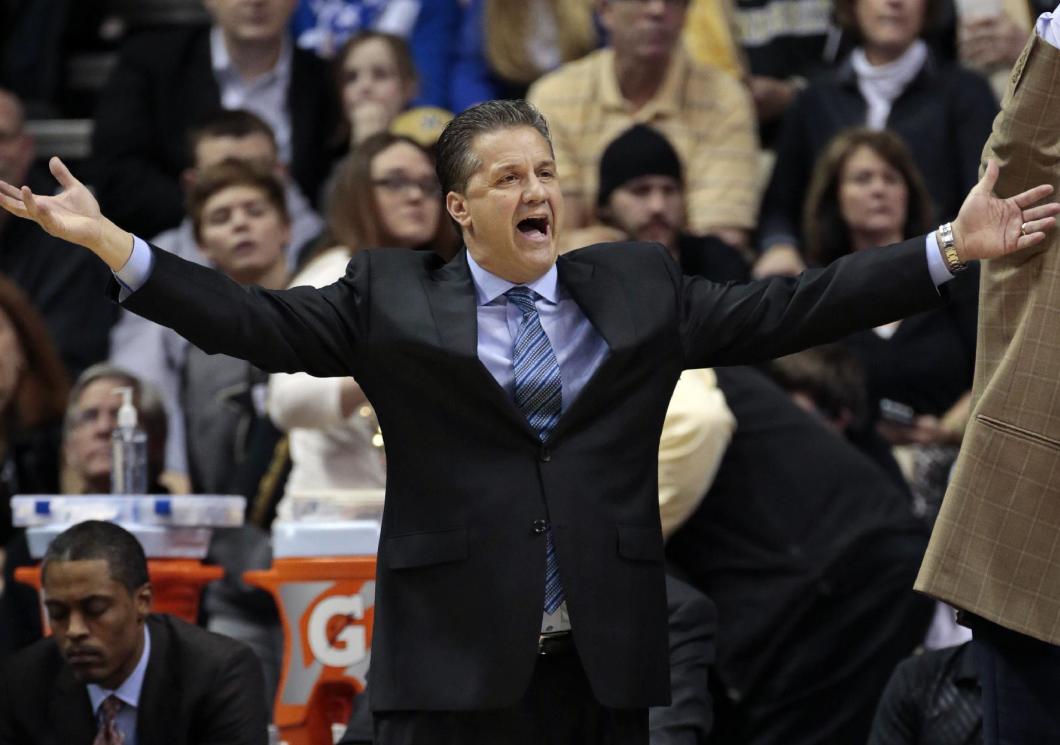 Friends of Big Blue Nation, that was an ugly showing we just witnessed from our University of Kentucky Wildcats. It was really, really bad. The Cats were bitten by the slow start bug again, falling down by 10 points before fans outside of the Pistol Pete Center were even able to catch the action on TV. (Thanks a lot, Iowa and Michigan State.) It didn’t get much better once the cameras were rolling as the Cats trailed for 39 minutes and 44 seconds to an 87-82 loss in snowy Baton Rouge. Don’t let that final score fool you, though; it was a 13-point deficit with just over a minute remaining in the game. UK never really stood a chance in this one.

Let’s discuss the game, because it’s too late to cancel it.

Pat yourself on the back, Dakari Johnson and James Young.

We’re leading off with the only two positive notes from the evening. Their names are Dakari Johnson and James Young and they are the only players on the team who gave much of anything.

Dakari scored a career-high 15 points on 7-of-8 shooting with six rebounds before fouling out late in the game. He played physical, he battled, and never backed down from LSU’s frontcourt, when it seemed everyone else in blue was. Kudos to Dakari for yet another great game off the bench when Willie Cauley-Stein wasn’t offering much. Is it time to give him a shot at the starting lineup? I’m not opposed to it, but Cal said he doesn’t intend to make that move any time soon.

Young also played great with 23 points, seven rebounds and two assists to lead the team in all three statistics. He was the only one doing anything on the offensive end to keep the Cats anywhere in the game. For example, with less than five minutes remaining, Young had the same amount of points (20) as Julius Randle, Willie Cauley-Stein and the Harrison twins combined. COMBINED.

Did Julius Randle make the trip?

Looking back on the game, I’m not sure I can remember anything positive from Julius. Wait, I think he went coast-to-coast for a dunk — yeah, he did. But that’s it. Nothing else comes to mind.

Randle was 3-of-11 from the field for six points and five rebounds with three turnovers. He got abused by the LSU bigs in this one, much like he did in Chapel Hill against North Carolina in early December. Jordan Mickey threw his stuff a couple times and Jarell Martin, who called Randle out yesterday, outscored him in the game.

LSU topped its season averages in steals and blocks.

We knew LSU could disrupt shots and create turnovers on defense, and that’s exactly what they did Tuesday night against the Cats. The Tigers recorded 11 steals and 11 blocks in the game, both above its season averages.

Kentucky won the rebounding battle in the loss. That’s good to know, I guess.

Johnny O’Bryant III had a hell of a game.

O’Bryant III scored a season-high 29 points against Kentucky and was unconscious from the field to start the game. Calipari said, “O’Bryant killed us” after the loss.

He was a big part of the reason LSU jumped out to an early 22-6 lead.

Harrisons will want to forget about this one.

Leaving Aaron Harrison’s nine points in 30 seconds aside — nice run at the end, though — Brothers Harrison had a terrible night in Baton Rouge. They reverted back to sulking instead of fighting through adversity and Andrew showed that he still isn’t ready to step up to the level of point guard play that John Calipari demands. Before Aaron’s three-point barrage at the end, the twins were 0-for-12 from the field in the second half when Kentucky was looking for them to step up to the challenge and lead a comeback.

That’s four out of five games now. He hasn’t proven he can compete against the big boys down low.

It was another Poythress-like game for Alex Poythress. He had five offensive rebounds to go with his two boards on the other end and 10 points off the bench. I guess we can throw him into that Pat-yourself-on-the-back group with Johnson and Young. Alex has become the one guy UK can count on to show up for every game. He’s slowly becoming Darius Miller.

LSU shot 50 percent from the field.

Calipari noted that not many teams shoot 50 percent from the field against his team. “You’ve got to give LSU credit.”

Cal also noted that he should’ve double-teamed O’Bryant earlier in the game. He admitted to making a mistake by waiting so long to do it.

Dan Dakich wasn’t bad at all.

Tip of the hat to Dan Dakich for calling a fair game. No complaints other than his inability to pronounce Alex PoytHress. I particularly enjoyed him screaming, “WHAT ARE YOU DOING?!” at the end, joining everyone in Big Blue Nation with the same outburst. As much as we hate to admit it, Dakich was pretty spot on with his analysis and criticism of the Cats.

Why didn’t they foul?

The world will never know. UK’s quit in the end may be the single most disappointing and frustrating moment of the season. I don’t understand why you don’t foul there. No one understands. Rex Chapman tweeted that he is “dumbfounded.” We’re all dumbfounded.

The team is stuck in Baton Rouge tonight due to weather.

What could make this night worse for the team? Being stuck in Baton Rouge after the loss. And that’s exactly what happened. They’ll attempt to fly back in the morning.

210 Comments for Is it too late to cancel the game?