The Cats are coming off an 87-77 spanking by UCLA on the road, where they looked young, inexperienced, and scared out of their minds. When I first thought to write this post, it never once crossed my mind that I would be writing it from this point of view. UCLA played in spectacular fashion, and the boys in blue couldn’t rise to the occasion in Pauley Pavilion on a rare Thursday night game. This was the replay of the Indiana game in 2012. Now, the question is how do we move forward and learn from this early season loss like that team did? Some recap on the relevant talent remaining on UK’s schedule this season would be a good place to start, so let’s hop into some early-December scouting reports.

Led by junior forward Savon Goodman and senior guard Gerry Blakes, the Sun Devils have gotten out to a 6-2 record on the year so far. They have two rather unimpressive losses, but UCLA had two as well. Arizona State is an experienced, fundamental free-throw shooting and rebounding team. Last night the Sun Devils got an impressive win against 18th ranked Texas A&M.

The Buckeyes are on a current four-game losing streak to some pretty trash teams and 10th-ranked UVA. Thad Matta is probably looking into one of those hair pieces that Bill Self has, and the Buckeye faithful are grasping their remotes praying for a Clemson/Bama/Stanford loss to keep their football championship hopes alive. Ohio State flat out sucks to be honest. They have been the most disappointing team on the schedule to watch outside of LSU, and I’d be shocked to see Ohio State give us a game on a neutral court. This is an NIT team, and the worst Ohio State team I’ve seen in years. Let’s move on. 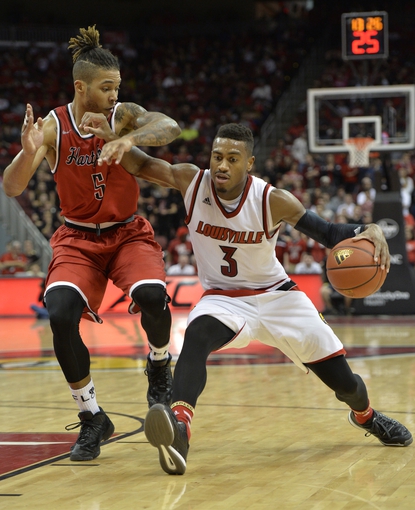 The Cards and their fans are having a heck of a time right now as UK struggled in the spotlight, and the Cards gave the assured new #1 team in the nation fits on their home court before going down at the wire, 71-67. Having lost two notable players, Rozier and Harrell, this team was left out of the preseason top-25 in 2015 and their players have taken notice. Graduate transfers Damion Lee and Trey Lewis have given the Cards new life and the team is playing with vengeance after being shown no love. The duo dropped 44 of Louisville’s 67 points against Sparty. They faced the idea of playing in a tough road matchup with no fear, and had the opportunity to win the game at the end against MSU, which should be a pre-cursor to how the game in Rupp could go if we don’t come out as the aggressor.

UL is roughly only playing about 8 players, and the transfers run the show. Their true bigs are soft like always, and they will rely upon the press and half-court pressure to slow the game down. Attacking the rim and getting these guys into foul trouble early will be imperative to take the fight out of the Cards early. You always have to like the Cats at home, and if our bigs show up at all, we will have opportunities inside all day long. The Cards are good, but the recipe for a win is simple. Stop Lee or Lewis, or both, and you win. Alright, next.

LSU has been hands down, the most underachieving team on our schedule thus far. With the addition of Simmons to a group of talented recruits and returning role players, the Tigers expected to hop onto the national scene based off hype. However, they sit at 4-3, having lost their last 3 games to unranked teams before a 119-108 win over North Florida the other night.

The talent is there, and the late-night road game is in place for an upset like last season, but can LSU pull it together in less than a month before they face the Cats at home? Ben Simmons has 6 double-doubles, and averages 14.9 rebounds a game, but LSU’s defense has been shaky to start the season, and they will have to have that cleaned up before UK rolls to town in early January. UK always gets every team’s best shot on the road though, so this could definitely shape up to be a challenging Super Tuesday game with a return trip scheduled for Rupp on March 5th.

Vanderbilt got hot in Maui, and they haven’t looked back since. The 16th-ranked Commodores have looked sharp, and they look like the best team in the SEC right now besides Kentucky. They shoot the ball well, attack the rim by committee, and play team defense. Kevin Stallings has got to be thrilled with the team he has this season, as well as the fact that UK has a return trip to Nashville slated for late February.

This team lost to Kansas in the Maui title game, 70-63, but showed they have the fight to defeat a big team. Behind Damian Jones, Luke Kornet, and Wade Baldwin the Commodores are efficient on both ends. Also, don’t forget about sophomore Riley LaChance, who can shoot the lights out from three. The home-and-away matchup with Vandy should prove to be two of our more difficult games this season.

The Cats will roll in Allen Fieldhouse on a weekend break from conference for the SEC/BIG 12 challenge. The Cats got the hardest game possible for this matchup, but would you want it any other way? Kansas is 5-1, with a close early season loss to Sparty in the Champions Classic, a game they handed away. Since that game, they’ve had Diallo enter the lineup after being freed by the NCAA, so they’ve only gotten better.

Wayne Selden and Perry Ellis have looked phenomenal so far to start the season and Diallo will continue to be a force down low. This game is the most daunting on the schedule, and the most likely loss we could have. KU shares the ball so well, but they stroke it even better. They’re ranked 10th in the nation in assists per game, and they shoot 45.7% from three with over 150 attempts. That is cash, ladies and gents. They pass and shoot the three as well as any team in the nation, and they have the experience and depth to easily make a late-season tourney run. The Cats will need to have fire in their hearts walking into a Rock Chalk environment on the road, let’s ball.

The Texas A&M roster is home to one of the most odd age dynamics in college basketball. With the perfect mix of seniors and freshman in the lineup, the Aggies have been able to balance out their youth with experience, and they’ve seen great success so far this season because of it. Led by Seniors Danuel House and Jalen Jones, A&M took down 10th-ranked Gonzaga and Kyle Wiltjer in the Bahamas Battle 4 Atlantis tourney semi-final, before losing to Syracuse in the title, 74-67.

This is a solid team, and their play as a team is exactly what makes them special. They are ranked ninth in the country in assists per game, and they don’t turn the ball over much. If there is a road game that we lose on the road in SEC play, I think this is it. Any SEC road game is up for debate at this point in the season, but Vandy and A&M are your clear cut teams above the rest in conference play. LSU will remain second-tier, even with Simmons, until they prove something to the world. You can check the Aggies out tonight against Arizona State, and see for yourself.