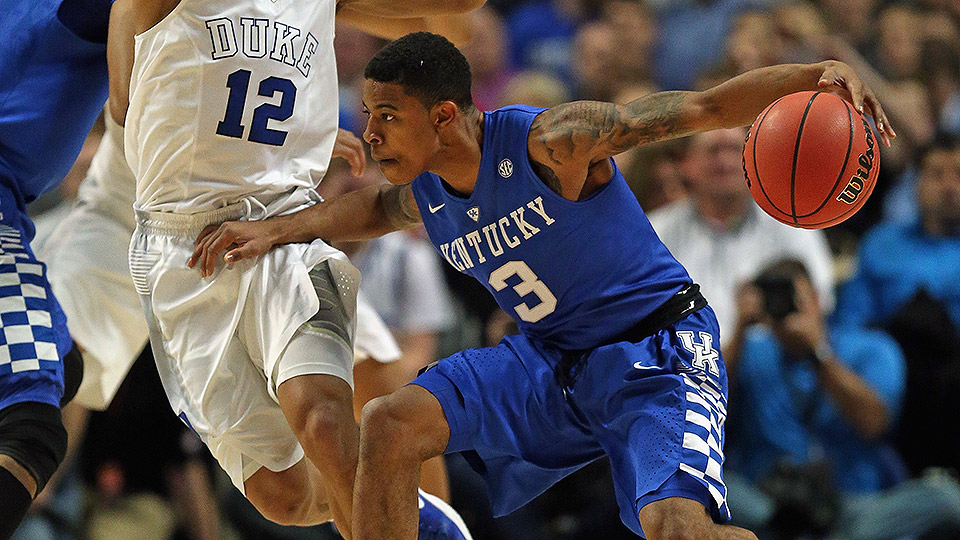 Nobody played better in their hometown than Tyler Ulis, via SI.

Since the schedule was released, Malik Monk’s calendar has been circled for January 7.  After hearing boos in every gym during his final year of high school in Bentonville, Arkansas, Monk has an opportunity to exact revenge on the Razorbacks at Rupp Arena.

Whether they will admit it publicly or not, games against your home state school or in your hometown mean more.  Everybody wants to be at their best against the ones they grew up with, in front of their family and friends.  Some thrive under pressure, others fold.  For most of Cal’s Cats, when the game gets personal they exceed expectations.

In his first trip to the Barclays Center with the Cats, the Newark native struggled.  2015’s CBS Sports Classic against Ohio State was a disaster.  Briscoe was 1-of-9 from the field, finishing with just 3 points.  He did other things well — grabbed 6 rebounds and dished out 7 assists — but it wasn’t enough, losing by seven to an average Ohio State team.

Lee left the game with injury, scored 2 points and grabbed 2 rebounds in only 4 minutes.

Ulis is from Lima, Ohio but played high school ball in the Windy City.  Against Duke in 2015, he made Grayson Allen his bitch, holding Ted Cruz Jr. to 6 points on 2-of-11 shooting.  Ulis led the team in scoring with 18 points.  He played every single minute and added with 6 assists, 2 steals, 4 rebounds and zero turnovers.

During the unprecedented destruction of UCLA in 2014 at the CBS Sports Classic, Ulis flirted with a triple-double, even though Kentucky platooned in a blowout.  Ulis had 7 points, 7 rebounds and 6 assists in just 18 minutes.

Their return was much, much better.  Andrew had 9 points and 4 assists while Aaron played the part of soul-crusher.

If you need all three shots, take your time and continue to press repeat.

There’s no need to talk about the third game in Jerry World.

Archie scored a team-high 14 points on 5-of-8 shooting.  He did a lot of things well, adding 5 rebounds and 2 assists, but he had to do exponentially more without Nerlens Noel and the Cats fell 73-60.

D-Lamb ate when the Cats took on Kansas in the first Champions Classic, scoring a team-high 17 points on 3-of-5 shooting from behind MSG’s three-point line.

The Indianapolis native had one of the best games of his young career in Kentucky’s final trip to Assembly Hall.  Teague had 15 points and 5 assists, but it wasn’t enough to prevent IU from making popcorn boxes, cutting down nets and hanging banners.

On UK’s way to the Maui Invitational, the team warmed up with a route of Jones’ hometown team.  The Real T Jones had 12 points, 5 rebounds and 3 assists in Kentucky’s 79-48 win over Portland.

Mobile’s DeMarcus Cousins took on the Crimson Tide twice in his only season at Kentucky, but never in Tuscaloosa.  Cousins had 16 points (6-of-8 shooting) and 13 rebounds in the Cats’ 11-point win at Rupp.  In the first round of the SEC Tournament, Cousins struggled to score, finishing with 7 points and 8 rebounds in the 7-point win in Nashville.

We knew we were getting a great one when John Wall committed to Kentucky.  He validated his greatness against North Carolina.  The Raleigh native finished with 16 points, 7 assists, 5 rebounds, 3 steals and one hell of a highlight reel.

I think we all know Malik Monk will come out firing against the team he turned down for Kentucky.  Hopefully it’s more like North Carolina than the game after North Carolina.

2 Comments for How Cal’s Cats Fare Against Hometown Teams