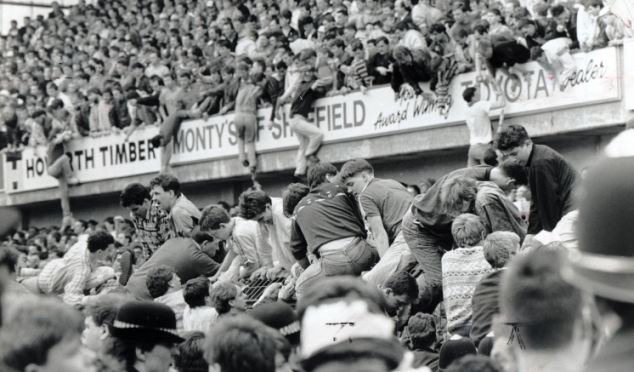 I spent a good portion of tonight watching the ESPN “30 for 30” on the English football disaster that occurred in 1989 entitled “Hillsborough.” For those of you that don’t know the story, at a FA Cup Semifinal game (the major tournament that is part of the English football season), 96 Liverpool fans were killed after being crushed in the stands during an overcrowding situation. The scenes and video from the disaster are haunting and the documentary describing the events is one of the more heartbreaking things I have ever seen. I can remember as a kid seeing a picture of the scene in Sports Illustrated that showcased people being crushed against the metal fences, and the image haunted me for a very long time. After watching the documentary tonight, it will be in my mind once again. After telling the story of the events, the documentary also features a good deal on the coverup perpetrated by the police and authorities in England to try to blame the fans for errors that were caused by those in charge. Now even 25 years after the events, there are FINALLY open investigations taking place about what happened and justice may come for the 96 fans that passed away on that day. If you get a chance, make sure and watch the documentary on ESPN (it replays Sunday at 10 pm) or read more about the story here.

With that, some notes on the stories of the day:

The NCAA deadline came and went today and as expected, no UK players announced their decisions. The real deadline is the one imposed by the NBA and that is April 27, giving all players 12 more days to decide their futures. Rumors began to spread today that the Harrison Twins could be close to announcing a return, likely fueled by speculation from a couple of UK reporters suggesting that good news was on the way. While I think it is perfectly possible that the Twins could return, I also think that all opinions on this subject are complete guesses. There are people “around” the Twins who are talking about the decision but I firmly believe that those folks are speaking with little knowledge. I was told by Mr Harrison at the Final Four that the decision would be made by his family and his family alone and there would be no leaks. I believe that and I don’t think the folks around UK know what the twosome are going to do either. Any guess by me would be just that…a guess and I think all speculation is exactly the same. Hopefully we will find out soon, although it could come at any time.

As for the rest of the players, I still believe we will hear a decision on Randle and Young this week and I expect both to enter the Draft. If either were to reach a different decision, I would be shocked. Alex Poythress has been the subject of some speculation today, but I still believe he returns to Lexington, where he is happy. That leaves Dakari Johnson, who is a true wildcard. One week ago, I think he was assured to come back to UK for another year, but at this point I am not sure. I still think smart money is on a return but he is definitely now actively considering leaving, something that didn’t seem possible just a week or so ago. These are anxious days for UK fans, but Willie returning does make everything a little brighter.

Calipari Continues to be Everywhere

At this point, I would be shocked if John Calipari does not end up on “Duck Dynasty” or “Party Down South” over the course of the next week or so. Calipari has been everywhere and is doing a great job at all his appearances. He will show up bright and early tomorrow on “Morning Joe” on MSNBC and then will find his way next week to “The Colbert Report” on Comedy Central (which has the potential to be epic. He continues to harp on the same themes about institutional change to the NCAA and there is no doubt that this is his focus throughout his travels. I am currently reading his book “Players First” (which is actually really interesting) and will be doing an event with him in Louisville on April 24th that I think you should check out. One of the things we have learned over the last couple of days is that Calipari is the master of the media and his appearances this week continue the theme of sports world domination that he is undertaking.

For what its worth, I am hearing that the Yahoo report of a UK basketball trip to Spain is not correct. The Cats are going to take a summer trip in August and my assumption is that it will be somewhere that isn’t Windsor, Canada. But I am hearing that it is much more likely to be a place like the Bahamas, or the like, rather than to Europe. Either way, save some time on your schedule for August basketball.

AT the time of this writing (a bit before 11), we are still waiting to hear what will happen to the Rupp Arena funding. The legislators have until midnight to make it happen and the Republicans in the Senate are still the ones holding up the process. We will know what they do by the morning and will deal with it then. If they don’t pass the money, after the University and city of Lexington made a number of the changes requested by them and after giving similar money not only to the Yum Center but to the Louisville Convention Center in this session…well somebody has some explaining to do.

Big day tomorrow…we are doing KSR Radio LIVE from Sleep Outfitters on 2105 Hurstborne Parkway in Louisville and giving away a trip to Las Vegas, Miami or another destination of your choice. If you don’t come, that is on you. So see you there…