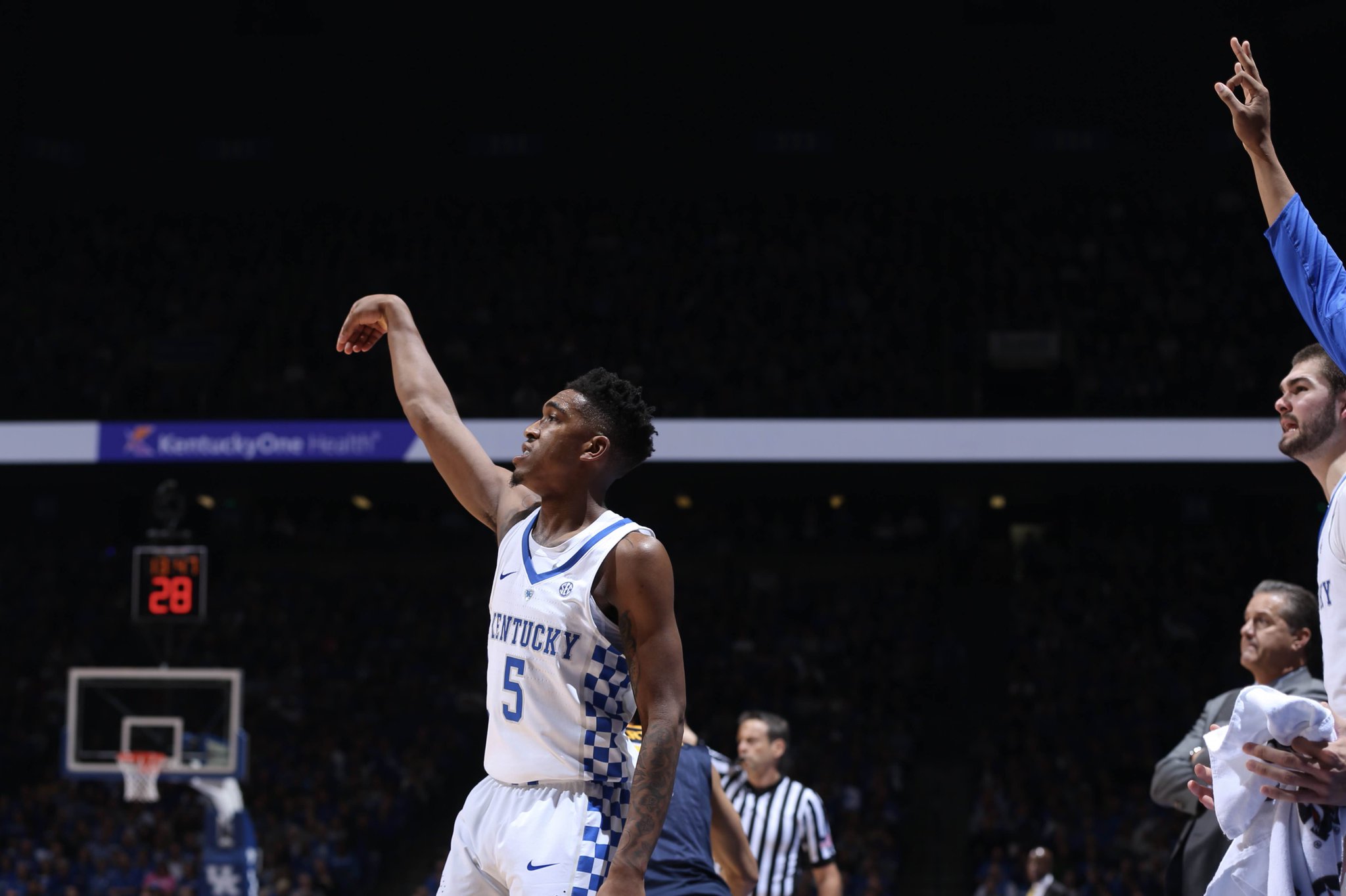 It wasn’t pretty to start, but the Cats took the reigns at halftime and controlled the remainder of the game with ease, beating Canisius 93-69.

The Golden Griffins jumped out to a quick 9-2 lead with the help of physical play, out-rebounding the Cats to convert on some easy buckets at the rim.

After a quick timeout from Calipari, UK stormed back on an impressive 11-2 run to take a 13-11 lead. From there, the contest was back and forth for the remainder of the first half.

At halftime, Briscoe led the team with 17 points (6/7 from the field) and one assist, while the rest of the Wildcats really struggled to get anything going. They were 9/25 from the field, good for a “meh” 36 percent, along with just two assists as a team.

Defensively, the entire team struggled in the first half. Derek Willis gave up buckets on three consecutive possessions, guys were left open out on the perimeter, etc. Overall, it was just a sluggish start in the first 20 minutes.

That being said, we ended up with this gem at the end of the half, which kickstarted the team into a flat-out butt whoopin’ in the second.

Malik Monk slams home the alley oop from De’Aaron Fox at the end of the half. #BBN pic.twitter.com/mLqJN8wq9y

After starting out 0-7 from behind the arc, Wenyen Gabriel knocked down a huge three from the top of the key two minutes into the second half to end the drought. From there, the team finished 4-16 (25%) from three.

The lead extended from there, and it never really got close again.

After a rough start, Malik Monk managed to get his shot falling, including two tough ones from behind the arc. He finished the day with 16 points (5-11 shooting), and 4-4 from the line. Even though he stands out on the box score shooting the ball, he still showed some spurts of youth in other facets of the game. He turned the ball over three times, dribbling recklessly through defenders and throwing some errant passes. On defense he looked good, but got beat on backdoor cuts on a couple occasions and looked lost at times. The potential is there for greatness, but we’re not there yet.

GREAT drop step out of the double team and big jam by Isaac Humphries. #BBN pic.twitter.com/MCNdS64eif

With 1:37 remaining in the game, Brad Calipari extended the lead to 30 points on a free throw, the largest deficit of the night.

After finishing with just five points and one rebound against Stephen F. Austin, Bam Adebayo emerged as a monster down low against the Golden Griffins. The North Carolina native finished with 14 points and 11 rebounds, though Coach Cal believed he could’ve had an even bigger game. He said, “He’s a beast. He could have had 25 points and 14 rebounds.” He missed several bunnies right at the rim, but showed flashes of brilliance throughout the contest.

After a record-breaking performance in his debut, De’Aaron Fox followed it up with another impressive night. He finished with 21 points, three assists, and four rebounds. His ability to fly from one end of the court to the other in a matter of seconds is unbelievable, really making those John Wall comparisons a reality.

The MVP on the day was without a doubt Isaiah Briscoe, as the sophomore guard managed to post a career-high 21 points on 9-13 shooting. He also pulled in five boards, two assists, and a block, completely abusing any defender thrown his way. This play by the vet was quite disgusting:

This bucket by Isaiah Briscoe off the spin cycle nets him a new career high of 21 points and counting. #BBN pic.twitter.com/yJWzhwUEvX

With the win, Kentucky moves to 2-0 on the season with a major test coming up on Tuesday against Michigan State at 7:00 PM.

2 Comments for Game recap: UK cruises to a 93-69 victory over Canisius