Editor’s Note: The following story is Mrs. Tyler Thompson’s recap after the eight-seeded Cats upset undefeated Wichita State in the second round of the 2014 NCAA Tournament.  The blast from the past will take you back to the moment where you knew something special was happening.  The original images have been archived, so it isn’t quite the same, but if you’d like to see the original comments, click here.  Enjoy our top story from March 23, 2014.

Three weeks ago in South Carolina, a teary-eyed Aaron Harrison told reporters that this season was still going to be a “great story.” His words rang a bit hollow during the low point of the season, but tonight, after one of the greatest basketball games I’ve ever witnessed, I’m not only seeing that story, I’m believing it.

Everything was set up for Wichita State to win. Despite going to the Final Four and being a number one seed, the mid-major darling still got the Cinderella treatment, and at halftime, the media had their recaps written. “36-0 vs. the team that was supposed to be 40-0.” Even with all the talent in the world, Cal’s one-and-done’s were just freshmen, and would never stay in school long enough to develop the maturity and experience like Ron Baker’s, or Cleanthony Early’s. The leadership just wasn’t there, and because it’s Calipari and because it’s Kentucky, it never will be. Right, national media? Right?!?

Wrong. Kentucky came out in the second half and tore those recaps into confetti, not only withstanding Wichita State’s punches, but delivering ones of their own. The freshmen were no longer freshmen–down the stretch, they played with the poise of seniors, sinking free throws and tightening the noose on defense. A very good Wichita State team gave Kentucky their best shot, and unbelievably, Kentucky responded, coming together as the team we always knew they could be. 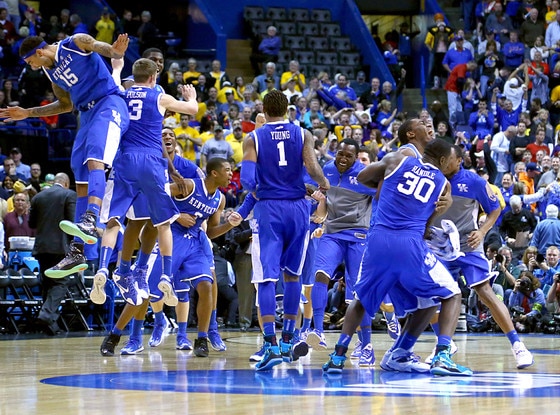 After the game, Willie Cauley-Stein said that three weeks ago, Kentucky would not have won this game. Since the regular season ended, the Cats have undergone an unbelievable transformation, bouncing back from their mistakes faster, and creating plays instead of waiting for them to happen. Suddenly, all those struggles Kentucky went through are actually helping them, as Cal said in the postgame press conference:

It all starts with the player that many thought wouldn’t even play tonight. Sore elbow and all, Andrew Harrison stepped up and led the team, sinking shots and crucial free throws with the poise of a pro. Andrew admitted that he was close to not playing because of the pain, but fought through it because he “just had to”:

“Yeah, I wasn’t going to play at first, but I felt like I just had to. And I fought through it. The elbow, once you get your adrenaline flowing, it felt fine, but it was still a little painful.”

You couldn’t tell by his actions. Andrew finished with 20 points off 6-9 shooting from the floor and 7-9 from the free throw line. His brother Aaron wasn’t too shabby either, nailing some threes when the Cats needed the most. Those two have endured enormous scrutiny since coming to UK, and only in the postseason say they’re finally having fun. Had Andrew not played today, this would be a very different recap. He’s the leader this team needs.

Andrew’s leadership was essential, but Julius Randle’s presence in the second half was huge. After scoring only two points in the first half, Randle went to work, finishing with 13 points and ten rebounds. He had more offensive rebounds (5) and second-chance points (6) than the entire Wichita State team. He also had a career-high six assists, a very encouraging stat and one that speaks to how well Kentucky played down the stretch. Cal admitted that he’s struggled with coaching Andrew and Julius at times this season, but now, we’re finally seeing what happens when they buy in.

All season long, this team has been burdened with unreasonably high expectations, and only in the postseason, when it’s either win or go home, have they been able to focus on what matters. Willie Cauley-Stein said that when the buzzer sounded this afternoon, “it felt like five million pounds came off our shoulders.” Kentucky didn’t just beat a good team tonight, they beat a great one, and with that, confidence will continue to grow. Andrew said that the win was big because it was a validation of all the hard work they’ve done. Julius said it was proof that what they’re doing is working:

“All of the adversity we have been through all season, just to see us coming together as a team and getting better each game, and finally get a big win like that, just enjoyed it. Everybody was happy and we just have to keep building on it.”

One of Cal’s most popular phrases lately has been how far this team still has to go. Before today, that comment terrified me. After today, it excites me. Kentucky went toe-to-toe with one of the best teams in the country today and won. You’re telling me this story gets even better??

If you forgot just how unbelievable the game was, watch the highlights.

What better twist than playing your arch rival in the Sweet 16? When the brackets came out, we saw the matchup with Louisville looming, and now it’s here. Defending national champs against last year’s defending champs. The last team to beat Louisville in the tournament? Kentucky. For the second game in a row, the pressure may be off the Cats again; they’ve beaten the Cards once this season. The matchups are still in our favor. As Willie Cauley-Stein said after the game, “I feel like we were a lot better than them then,” and this team’s ten times better than they were on December 28th. The Cats are riding a freight train of momentum into Indy, and with this win, I’m not sure they can be stopped.

It’s gonna be one hell of a week, folks.

2 Comments for From the KSR Archives, UK Beats Wichita State in 2014: Kentucky spoils one story, writing a classic of its own